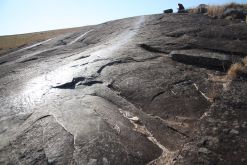 The sliding stone on which Mandela used to slide down as a child.
(Image: Musa Mkalipi) 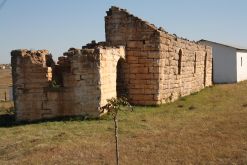 The ruins of the African Native Mission Church that Mandela was baptized in.
(Image: Musa Mkalipi) 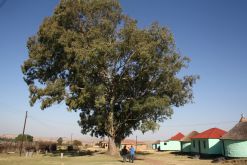 It was while hiding behind this old gum tree at Mqhekezweni Great Place that Mandela learnt more about democracy.
(Image: Kgopi Mabotja)

Known to many as the man who liberated South Africa from apartheid, Nelson Rolihlahla Mandela, whose clan name is Madiba, is a world icon recognised for his integrity and his will to fight for the freedom that we relish today.

One way of understanding the man is to explore the countryside in which he grew up. Visitors can create their own Nelson Mandela route across Eastern Cape, the province of his birth and early years – and the place to which he returned after retiring from public life.

One starting place would be the Amathole Museum in King William’s Town, of which Mandela is a member, is one of the oldest museums in the country. It features an array of South African history, particularly conflicts between British, Boer and Xhosa people.

An hour-and-a-half’s drive from King William’s Town brings you to Alice, home of the University of Fort Hare, on the banks of the Tyhume River. Mandela spent some years studying here for a Bachelor of Arts degree. It was here that he met comrade Oliver Reginald Tambo, another of the great anti-apartheid activists. The university houses the De Beers Centenary Art Gallery, which has a collection of black South African art.

Leaving Alice, the route leads to Mvezo, just off the N2. Mvezo is Mandela’s birth place and it is here that the Mandela chieftaincy is located. This is where he was named Rolihlahla, which means pulling a branch of a tree; colloquially, it is taken to mean trouble maker. Mvezo is a place of peace and tranquillity. It is in a beautiful region of a beautiful country, with abundant nature and has been a tourist destination for locals and foreign visitors wanting to learn about this historic figure. It is in Mvezo where Mandela’s umbilical cord is buried, on the banks of the Mbashe River. Mvezo used to house a component of the Nelson Mandela Museum, but this is not operational at present.

Mvezo is a key part of Mandela’s heritage. The remains of the homestead in which he was born can still be seen at the village. Sister museums in Mthatha and Qunu, Mandela’s retirement home, contain more information about his past. Zwelivelile Mandla Mandela, the great man’s grandson, lives in Mvezo, where he is the chief of the Mvezo traditional council, which rules the Abathembu clan.

Leaving Mvezo, travel along the N2 highway. A number of villages are passed before reaching Mqhekezweni Great Place, the capital of Thembuland. The roads to Mqhekezweni are dusty, with thatched houses and mud huts. A train station sits abandoned in the area. Mandela moved to Mqhekwezweni at the age of nine, after his father died. He was adopted and groomed by the acting regent king, Jongintaba Dalindyebo. The traditional mud homes in which they lived still stand firm at the village.

The rondavel in which Mandela stayed after initiation school in 1934 has remained unchanged. On entering it, the first thing that jumps out is the large picture of Chief Jongintaba. Next to the photo lies a dusty brown bookshelf, in which Mandela kept his reading material. “This is one of the oldest buildings in the area, nothing has been changed accept the painting that is seen outside,” explains Zimisele Gamakhulu, a tour guide at the Nelson Mandela Museum in Qunu. The big gum tree at Mqhekezweni Great Place still stands.

Mandela’s political interest began when he was a child. In his autobiography, written after his release from prison, Long Walk to Freedom, Mandela says that his political interest was first aroused when he listened to the tribal elders during their meetings. He would hide behind the big gum tree, opposite his rondewal and next to the kraal. Here he would sit and listen to the men talk. This is also where he learned about African democracy, and Mandela often describes Mqhekezweni as a place of learning.

But before his move to Mqhekezweni, in 1920, at the age of two, he moved to Qunu, a village outside Mthatha. Qunu lies in a narrow, gravel valley Mandela explains in Long Walk to Freedom. Mandela spent much of his childhood in Qunu, and it is to this beloved area that he retired. Along the N2 is the house he built for his family when he returned from Robben Island. The vast facebrick and pink house is still home to a number of his relatives.

Many members of the Madiba clan live in Qunu. A 10-minute walk along the dusty roads of the village lead to a graveyard in which Mandela’s parents, Nonqabi and Nkosi Mphakanyiswa Gadla, are buried, as are some of his children.

Qunu is a very rural area, with mud huts and rondevals scattered around the village. The people maintain their traditional lives, and wear their traditional Xhosa clothing. The village buzzes with people from around the country and abroad who all want to get a glimpse of Mandela’s origins. This historical village is home to the Nelson Mandela Youth and Heritage Centre, which is another component of the Nelson Mandela Museum.

The ruins of the old single-room Qunu Primary School that he attended can be seen just before the entrance to the centre. This is the school in which he got his “Christian” name, Nelson, from his teacher, Miss Mdangane, on the first day of school. The centre offers exhibitions, tours, accommodation and conferencing facilities. One of the exhibitions is Mandela and Luthuli In Conversation, which celebrates the legacy of these two struggle icons and Nobel Prize winners. Chief Albert Luthuli, once the president of the African National Congress (ANC) received the Nobel Peace Prize in 1960 for his role in the non-violent struggle against apartheid. He was the first African, and the first person from outside Europe and the Americas, to be awarded the Nobel Peace Prize.

The exhibition was previously kept at the Bhunga Building in Mthatha, but moved to Qunu while renovations are undertaken at Bhunga. The exhibition is a compilation of personal exchanges between the two leaders. Writings, photographs, audio material as well as film footage can be seen at the exhibition.

A modern building, the centre traces the rich history of Mandela and the ANC. Visitors can walk in Mandela’s footprints, going to the various places that he was fond of as a child. There is a replica of his cell on Robben Island, though the view here is one of rolling green pastures. It was in these pastures that a young Mandela would herd cattle and play with his friends.

Not far from these hills is the sliding stone, on which he used to slide down as a child. The African Native Mission Church in which Mandela was baptised is in a bad state as it has not been maintained or repaired. “The Department of Arts and Culture promised a long time ago to restore this building because it is a heritage site, however we are still waiting. These things take time,” says Zimisele. Also in Qunu is the Qunu River in which Mandela used to swim in as a child. Schoolchildren regularly visit the youth centre.

Transkei was one of the TBVC (Transkei, Bophuthatswana, Venda, and Ciskei) states, or separate homelands under the apartheid government.

The Bhunga Building has three wings, the first of which contains displays of the awards and gifts given to Mandela after his release from Robben Island. One of the wings is named Long Walk to Freedom after his autobiography. His life is depicted through illustrations and photographs, giving the visitor and the history student a better understanding of the great man.