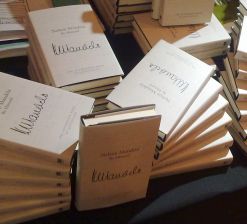 Nelson Mandela by Himself: The
Authorised Book of Quotations is a
comprehensive resource on the sayings
of South Africa’s former president.
(Image: Janine Erasmus) 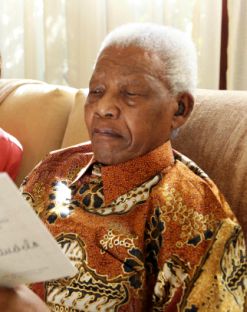 The book contains over 2 000 quotations,
gathered over six decades, and is
expected to lower the many incidences
when Mandela is misquoted..
(Image: Nelson Mandela Foundation)

The Nelson Mandela Centre of Memory has published a new, authorised book of quotations from the respected former president – one they hope will help his many admirers to quote him accurately from now on.

Nelson Mandela by Himself: The Authorised Book of Quotations was released at the Nelson Mandela Foundation on 27 June 2011, and sales were brisk at the launch function.

“We wanted this to be a book of substance,” said the centre’s memory programme head Verne Harris, “and one that wasn’t necessarily based on the well-established narrative of Mandela’s life.”

Under the editorship of Mandela Foundation communications manager Sello Hatang and senior researcher Sahm Venter, the new book also aims to make the task of the foundation easier as it receives hundreds of phone calls every month from people wanting to confirm Mandela’s words of wisdom.

Although small in size, the book contains over 2 000 sayings by the elder statesman, gathered over six decades. They’re categorised under keywords such as responsibility, humanity, reconciliation, prison, integrity and South Africa – 317 sections in all.

The prison category is divided into 26 sub-sections, including comrades, loneliness, and reflections. The South Africa section has 13 sub-categories.

The book also includes a timeline of important Mandela events, and a selection of books and documentaries that were used as references.

The editors, who claim that Mandela is one of the most frequently quoted people in the world, guarantee that each saying is 100% accurate. Hatang and Venter delved into Mandela’s notebooks, letters, speeches and audio material in order to put the collection together. Many quotations are previously unpublished.

“We pass through this world but once,” says the quotation inside the covers, “and opportunities you miss will never be available to you again.”

“Granddad doesn’t often talk openly about his feelings,” said Ndileka Mandela, daughter of Mandela’s older son Thembekile, at the event, “so this book is a priceless resource and an insight into his thoughts”.

“This book is long overdue,” said politician and businesswoman Cheryl Carolus. “For years we’ve looked up to Madiba and his generation as the leaders, but today we are the frontline generation and the future is in our hands. As such, we can all benefit from his wisdom.”

Ahead of his time

Mandela’s sayings are presented in chronological order within each section, so the reader can track the progression of his thoughts and opinions on any matter. Many subjects are even more important today as they were a decade or two ago.

In 1992 Mandela said: “Many of us find it difficult to talk about sex to our children, but nature’s truth is that unless we guide the youth towards safer sex, the alternative is playing into the hands of a killer disease.”

HIV/Aids has swept through South Africa’s population in recent years, killing millions. According to the national Department of Health, until 1998 the South African Aids epidemic was the fastest expanding on earth, but it has since slowed. Incidences of mother-to-child transmission, in particular, have dropped from 8% in 2008 to 2% in 2011.

“In this regard Granddad was far ahead of his time,” said Ndileka Mandela. “During a Robben Island visit, I was shocked when he asked me very personal questions about my relationships, and warned me about safe sex. You didn’t talk about those things back then.”

A poignant entry from 2005 reads simply, “My son has died of Aids.”

“Yes, Aids has touched our family,” Ndileka Mandela said, referring to the death of her uncle Makgatho, who passed away at the age of 54.

Mandela was adamant that the cause of his son’s death should not be hidden, because treating Aids as something mysterious only adds to the stigma and misinformation that helps the disease to proliferate.