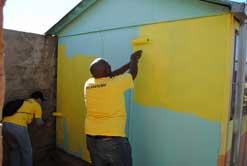 Staff from Brand South Africa do their 67 minutes for Mandela Day at the Ebenezer Hannah Home in Walkerville, south of Johannesburg. 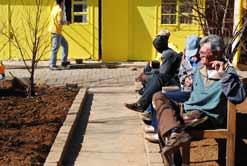 Some of the residents of Ebehezer wait outside in the winter sun as their rooms are being painted. (Images: Anish Abraham) 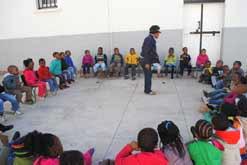 Pupils from the Sunrise pre-school in Braamfontein are told of their Mandela Day task – writing message cards for Madiba – by a staff member at Constitution Hill in Johannesburg.
(Image: Valencia Talane)

Civil society group Lead SA pledged to make former statesman Nelson Mandela’s 94th birthday, which was on Wednesday 18 July, one he will never forget. This they ensured by making sure South Africa, and the world, stand as one to wish Madiba the best in song.

The organisation wanted to create an endearing memory by giving him the best birthday present ever – the love of the world.

Approximately 12.5-million school children participated in the initiative,  which was also supported by the Department of Basic Education, the Nelson Mandela Foundation, Shout, Brand South Africa and Proudly South African.

A Lead SA spokesperson said the unique and memorable rendition of the Happy Birthday song marks a place in time for all South Africans to preserve Madiba’s living legacy.

At 8am South Africans from all walks of life, including pupils, prominent artists and personalities, united their voices in song to wish the country’s favourite icon good health and a blessed day – a gesture of love and appreciation broadcast on national TV and by most radio stations.

Tata Madiba, who has bowed out of public life, was visited by President Jacob Zuma in his rural home in Qunu in the Eastern Cape the week before. Zuma had been in the area to view the construction site of a bridge that is being built in Madiba’s honour to increase access to Mvezo village.

Zuma reported that Mandela was in good health, happy and content.

Many government employees heeded the call to spend some time on Nelson Mandela’s birthday doing something for those less fortunate than themselves. From administrative staff to premiers and even ministers, the 67 minutes campaign received a lot of support on the day.

In honour of the iconic leader, businesses, schools, government structures, charitable groups and ordinary South Africans gave 67 minutes of their time to give back to their communities.

International Nelson Mandela Day is not only special to the man himself, but to ordinary citizens as they celebrate by taking action to help change the world for the better.

And this year has not been any different, as people across the country played their part by ploughing back into communities, either by refurbishing schools, helping out at old age homes and hospitals, among others.

Various events, both by government and non-governmental organisations, were planned across the country. The national event was held in Zeerust, where Arts and Culture Minister Paul Mashatile and the Premier of North West Thandi Modise set aside time to do community service.

Staff from Modise’s office handed out gifts to three schools,  the Madiba Comprehensive School in Rooigrond, as well as Thutlwane and Madibogo Pan primary schools.

Several other Cabinet ministers also rolled up their sleeves to do their 67 minutes. Public Works Minister Thulas Nxesi was at the Refilwe Orphanage, Disability Centre in Cullinan, east of Pretoria.

Deputy Water and Environmental Affairs Minister Rejoice Mabudafhasi was at Boitumelo High School in Ficksburg, where she mobilised the local community to provide their time and labour for free to paint the school; laying the foundation for toilets; cleaning the school yard and planting trees, amongst others.

Deputy Minister of Women, Children and People with Disabilities Hendrietta Bogopane-Zulu led a team of volunteers on Tuesday night who handed over blankets, soup and pizza and to people living on the streets in and around Pretoria.

Provincial administrators also honoured their 67 minutes pledge. The Gauteng Department of Roads and Transport undertook a cleaning campaign at the Mabopane Driver’s Licence Testing Centre – one of the busiest in Pretoria. The campaign is expected to create a new face for the centre and make it environment-friendly.

There were other activities including story-telling, motivational talks as well as sporting activities.

In the Eastern Cape, the Minister of Transport Ben Martins and the province’s transport MEC Thandiswa Marawu were to honour the 67 minutes initiative by painting road markings in Sutherland Street in Mthatha before educating learners at Milton Mbekele Senior Secondary about road safety.

The Independent Electoral Commission (IEC) played their part countrywide as their staff dedicated their 67 minutes to as many as 15 projects.

One of the projects was the New Jerusalem Children’s Home in Midrand. An estimated 60 IEC staff members were cleaning, painting and maintaining the home, which provides residential care for abandoned, abused, traumatised, orphaned or HIV-positive children and vulnerable youth.

Others include the Ratanang School for people with disabilities in Limpopo, Othandweni Family Care Centre in Soweto, and the Kgomotsego Old Age Home in Kuruman.

IEC Chairperson Pansy Tlakula said she was excited at the high level of energy demonstrated by her officials nationally, and proud that the organisation would be involved in so many projects.

Early birthday messages to Madiba have also been pouring in. Eastern Cape Premier Noxolo Kiviet assured Tata that her department was working tirelessly – more than 67 minutes every day – to make sure that the face of his home province of the Eastern Cape changes for the better.

“We understand that unless that life of prosperity and greatness manifests for the most down trodden and poor people and their communities. We will be failing you and other past leaders who made supreme sacrifices for the freedom and democracy we are enjoying today,” Kiviet said before wishing him good health.

On Wednesday evening, soccer fans at the Moses Mabhida Stadium in Durban will once again sing for Madiba ahead of kick-off of the match between AmaZulu and Manchester United.