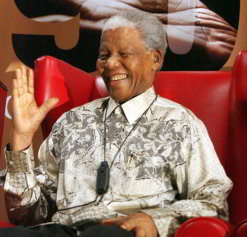 A national singalong involving people across South Africa took place just after 8am, where schoolchildren and adults alike sang for the former president, known affectionately as Madiba.

“As the commission, there are no words to begin to describe this gallant freedom fighter of our lifetime, who, despite being incarcerated for 27 years, came out to spread a message of hope and goodwill to all races,” said CGE.

“Tata Mandela has continuously advocated for a non-discriminatory, non-racial and non-sexist and just society.”

The commission described Madiba as “a true legend of our society and a gender icon of note”, as depicted by his call for a society free from gender oppression and inequality, something with which the commission identifies.

“As we celebrate the birth of this hero, the commission calls upon all South Africans to remember his ideals and principles, such as dealing with the abuse of women and children and creating an HIV/Aids free society.”

There is plenty in store for South Africans all over the country on Mandela’s 93rd birthday. The day is also known as Nelson Mandela International Day, where everyone is called upon to spend 67 minutes doing some good in their communities.

The 67 minutes symbolise the 67 years of public service Mandela dedicated to fighting for a change in South Africa.

Acts of goodwill all over the country

Minister of Defence and Military Veterans Lindiwe Sisulu and her staff will celebrate the day by painting a school that’s converted into a community hall in uMthatha, situated close to Mandela’s birthplace of Mvezo.

They will also take part in a cleanup operation in the town on Tuesday, and donations of blankets and heaters, as well as the maintenance of Efata College on Wednesday.

In Gauteng, probationers and parolees will join the Department of Correctional Services officials at Mamelodi Hospital and Mmalerato Care Centre, cooking and cleaning the yard facilities, washing and ironing the laundry.

The National Youth Development Agency board will spend the day interacting with learners during a career guidance counselling session. Agency chair Andile Lungisa will join Blade Nzimande, the minister of higher education and training, at the Nelson Mandela Day Career Guidance Festival in the Eastern Cape.

In Mpumalanga, the deputy minister of mineral resources Godfrey Oliphant and the province’s Premier David Mabuza will lead a team of volunteers to the Bophelong Stimulation Centre in Siyathemba, Balfour.

The centre, which is being run from a small government-funded house, gives specialised day care and stimulation services to 25 children from the area. It was started in March last year by a caregiver, Zamela Maqutyana, as an interim solution to a longstanding need for a facility of its kind in the community.

Volunteer work will include plastering and painting of the centre, building of a wheelchair ramp, cooking and cleaning, planting a vegetable garden, repairs to electric plugs, ceiling panels, doors and the toilet to make the centre more comfortable and accessible to the children.

The centre will also get food parcels, blankets and surprise pledges from both the Dipaleseng local municipality and the nearby Burnstone mine.

In the Northern Cape, energy minister Dipuo Peters will visit schools and an old age home in Galeshewe, where she will donate school shoes and computers to five schools in the area.

Peters will also get her hands dirty by working in the old age home’s garden and giving 200 food parcels to poor families and the aged in the area. She will also provide bread and soup to needy members of the community and the homeless.

Communications minister Radhakrishna Padayachie will distribute blankets to the poor and destitute in KwaZulu-Natal. The department launched the Operation Warmer Winter blanket campaign in Gugulethu in the Western Cape in June, and blankets have since been distributed in the Free State, North West and Gauteng provinces.

In Cape Town, the Social Development Department will host a forum for community dialogue about xenophobia, in honour of Mandela Day.

The project showcases innovative housing solutions for the subsidy sector and will see construction of eight affordable, semi-detached double-storey houses of 60m² each in Conifers, Blue Downs, a suburb on the Cape Flats.

Staff of the city’s 107 Public Emergency Communication Centre will spend 67 minutes of their time at the Haven Night Shelter in the southern suburb of Retreat. The team will assist with the preparation of meals and other tasks which need attention in and around the shelter.

After lunch is served, the 107 team will educate the staff and homeless people at the shelter about the 107 emergency number and the services linked to it.