Tens of thousands of mourners were still queuing up at park-and-ride areas in Pretoria on Thursday afternoon for a bus ride to the Union Buildings where Nelson Mandela’s body was lying in state for a second day.

The long snaking queues at the Tshwane Events Centre, Fountain Valley and LC de Villiers park-and-ride facilities were reminiscent of the first democratic elections in South Africa nearly 20 years ago – the first elections of a democracy that Mandela was instrumental in bringing to fruition.

At the Union Buildings, mourners queue again to enter the Nelson Mandela Amphitheatre where Madiba’s body is stationed under a specially erected structure, adorned with white flowers. Only his upper body is visible through a transparent window at the top half of the casket.

The body is under constant watch by members the ceremonial guard of the South African National Defence Force (SANDF), with Mandela’s grandson Mandla Mandela also keeping a constant vigil on Thursday.

‘He is the man who changed our lives’

Mourners, who are not allowed to take pictures with their mobile phones, file past the coffin under direction from members of the South African Police Service (SAPS).

“He is the man who changed our lives,” 56-year-old Agnes Maseloa told SAnews after viewing Madiba’s body on Thursday morning. “We struggled a lot, but he changed our lives. I can live here now without needing a pass.”

“Although I feel very sad that he is gone, I am glad I came to see him,” said Maseloa, who originally hails from Qwaqwa in the Free State. Now resident in Pretoria, she took a day off to come pay her last respects to Madiba.

Gcobisa Qupa said seeing Madiba lying in state had made real the fact of his passing. “I feel very sad”, Oupa said.

Mourners were comforting one another, handing over tissues to those in need, and giving a helping hand to people in wheelchairs.

Hundreds of SAPS, Metro Police and SANDF members ensure that security at the Union Buildings is kept tight, with horse-mounted patrols patrolling the surrounding precinct.

Madiba’s body will lie in state until 5.30pm, after which it will be transported in a cortege to 1 Military Hospital.

Mourners can view the body again on Friday from 8am to 5.30pm – the last opportunity to do so before Madiba’s body is flown to Qunu, his birthplace in the Eastern Cape, for burial on Sunday. 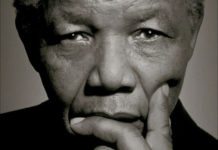