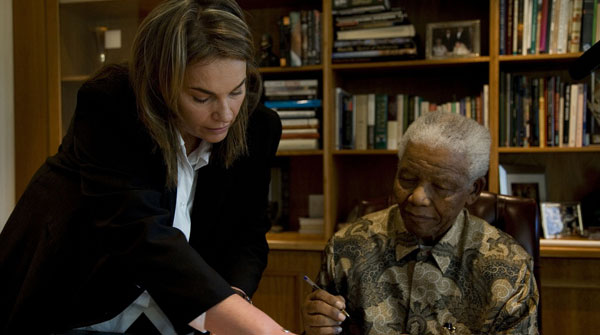 Zelda La Grange was the fearsome gatekeeper with whom anyone hoping to share a moment with Mandela had to negotiate. Her new book, Good Morning Mr Mandela, sheds light on her relationship with this former icon. (Image: ©Nelson Mandela Foundation/Alet van Huyssteen)

• Mandela and the making of a woman
• Mandela’s close friends express the world’s grief
• ‘Goodness exists – greatness is possible, within a human being’
• Tutu leads Mandela memorial at Centre of Memory
• Bikers hit the road for Mandela Day

Zelda la Grange has dedicated her life to the inspirational father of the nation. Plucked from the obscurity of the presidential typing pool, she became Nelson Mandela’s right-hand woman: holding his hand, whispering in his ear, accompanying him to voting booths, a travel companion, spokesperson, close confidante and honorary granddaughter.

La Grange recently published her memoir Good Morning, Mr Mandela, in English and Afrikaans. In it she tells the story of how as a young woman, she had her life, beliefs and prejudices from childhood utterly transformed by one of the greatest men of our time.

In it, La Grange pays tribute to the Mandela she knew – the teacher who taught her the most valuable lessons of her life. The man we meet in these pages is one who refused to be defined by his past, who forgave and respected all, but who was also frank, teasing, and direct. As he renewed his country, he also freed La Grange from a closed world of fear and mistrust, and gave her life true meaning.

Agent Jonny Geller said: “She really was completely devoted to the job… As people from Bono to Bill Clinton will testify, she was the gateway to the man, and that was a 24-hour job. But in the last year, she started to think that all her extraordinary experiences were worth putting down. And she’s a natural writer.”

Editor Helen Conford said it was “a book that will touch your life and make you believe that every one of us, no matter who we are or what we have done, has the power to change. It has brought tears to the eyes of everyone who has read it. It shines with honesty and love. The lessons Nelson Mandela gave her as he renewed his country offer hope to everyone.”

This is a book about love and second chances, one which honours the lasting and inspiring gifts of one of the great men of our time. It offers a rare, intimate portrait of Mandela and his remarkable life, as well as moving proof of the power we all have to change.

La Grange will donate a percentage of the royalties from the book to the Nelson Mandela Foundation “to protect and further the legacy of its founder”.

The book is published by Penguin Books South Africa.

As a young girl, La Grange dreamed about becoming an actress. But heeding her father’s advice that she would battle to make a living unless she was in Hollywood, at 20 she studied for an executive secretary qualification.

She comes from a staunchly Afrikaans family. Her father was an executive at South African Breweries before running his own butchery and her mother was a teacher. Her parents voted for the National Party, which presided over the apartheid government until democratic elections in 1994. The family attended the local Dutch Reformed Church.

Her journey with Mandela

She worked for Madiba for 19 years as his private secretary and personal assistant, and continues to support his legacy after his death. Born on 29 October 1970, in the late 1990s the Afrikaans-speaking La Grange became a familiar figure. She rose from middle-class anonymity to become the woman most often seen alongside Mandela in public.

Speaking to Britain’s The Guardian newspaper in 2008, La Grange spoke about becoming a typist in the presidential office in 1994, and her first meeting with Mandela. “I knew that he was a friendly man. I had seen him greeting other people, but I had never had any encounters with him. But then I ran into him, as I say, by accident and he started speaking Afrikaans to me, which I didn’t understand immediately because the last thing I expected was for him to speak in my own language to me. His Afrikaans was perfect but I was in such a state that I didn’t understand what he was saying. I was shivering.”

She shivered, she said, “because I was scared of him, not knowing what to expect of him, whether he was going to dismiss me, humiliate me… and instantly it was that feeling of guilt that all Afrikaners carry with them… He was 75 at the time, and you could see he was old and the thing that immediately crosses your mind is: ‘I sent this man to jail. My people sent this man to jail!’ I was part of this even though I couldn’t vote. I was part of this, of taking from a person like him his whole life away. And then I started crying. And then he shook my hand, and he held my hand.”

She was shedding tears but Mandela “just held my hand and he continued to speak to me”.

A year later she became his seven-days-a-week, 24-hours-a-day personal assistant, jetting around the globe with him in private jets and meeting the who’s who of the world. La Grange was the fearsome gatekeeper with whom anyone hoping to share a moment with Mandela had to negotiate.

Over almost a decade their relationship grew to the extent that calling him khulu, which means grandfather in isiXhosa, came naturally. They became so close that she started anticipating his responses. Following his death on 5 December 2013, La Grange released a statement, saying: “As sad as it makes me that I will never walk into a room again and see his generous, infectious smile or hear him say, ‘Oh Zeldina, you are here,’ I have come to terms with the fact that Madiba’s legacy is not dependent on his presence… Thank you for believing in me, Khulu, making me a better person, a better South African.”

The former aide, affectionately called “Zeldina” by her boss, has shared personal stories about her time with him. The nickname originated during a state visit to Russia in 1999, La Grange said. “Madiba just decided my name was Zeldina and almost everyone is calling me that now.”

After he retired from public life she took over all dealings with the media and others. “You know how disciplined Mandela was… He was strict and punctual… Someone had to take the blame to take him away. I’ve been called many names… Rottweiler, General… but someone had to do that so he got done what he wanted to do. I felt a lot of pressure and stress.” 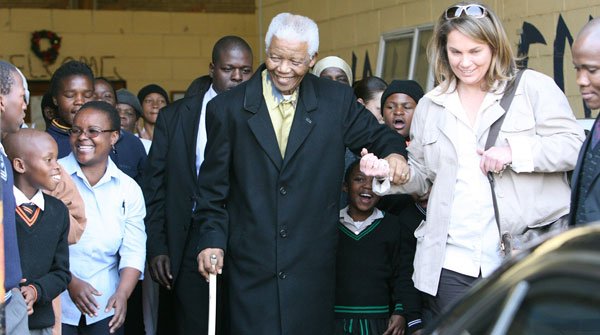 That pressure was relentless, she said: following Mandela around the world, organising his every move, and shielding him from the never-ending stream of people clamouring for a moment in his presence. She has never married or had children, and would work up to 18 hours a day arranging his diary. In 2002, she left the government and became a full-time employee of the Nelson Mandela Foundation.

Her dedication and loyalty to Mandela have been recognised by several institutions over the years, including Tshwane University of Technology, Pretoria Chamber of Commerce, and Rapport and City Press newspapers, as well as global football governing body FIFA, for her assistance and support during the 2010 World Cup, which was held in South Africa. She is the co-ordinator of Bikers for Mandela Day, for which she advocates for International Nelson Mandela Day. She has been the patron of the First for Women Insurance Trust since 2010 and this year was appointed the ambassador of Beeld Children’s Fund.