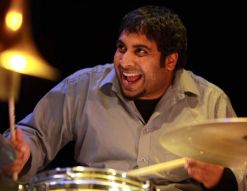 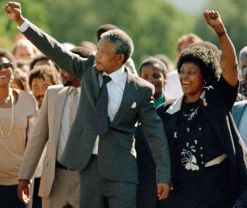 “Freedom Dance: Toyi Toyi” is interspersed with samples of Mandela’s speech made on the day of his release from prison.
(Image: ANC Archives)

The first time Kesivan Naidoo saw Nelson Mandela on television was 23 years ago, when the former president was released from prison. The jazz drummer was just 10 years old at the time and was oblivious to how that moment, 11 February 1990, would shape the way he made music in his adult life.

Now 34, Naidoo, who is a regular headline act at jazz concerts and festivals, including the National Arts Festival now under way in Grahamstown, commemorated that moment by composing a jazz medley titled Freedom Dance: Toyi Toyi.

He was sitting with his grandmother and parents in their East London home when Mandela addressed an elated crowd from the balcony of Cape Town’s City Hall. “I remember everyone at home in tears. We were happy and heartbroken at the same time. And I remember the first thing my mother said to me was: ‘You can now go to any school you want.’”

Nearly two decades later, Naidoo started writing Freedom Dance: Toyi Toyi after watching the documentary Amandla! A Revolution in Four Part Harmony, in 2009. The film is about the role of music in the struggle against apartheid. File footage of Mandela’s release in the film took Naidoo back to that moment in his family’s home and inspired him to pen the song.

Freedom Dance earned him the 2009 Standard Bank Young Artist Award at the National Arts Festival. “The piece came out of a basic melody. It was mainly free jazz which allows for some improvisation,” he says. As with many jazz compositions, it has since evolved and taken on many forms. Some versions are interspersed with samples of Mandela’s speech made on that day.

Besides it being a “movement towards freedom”, Naidoo intended his composition to be a critique on how modern South Africans have removed themselves from their past. “The song asks the question: are we on a mission or not? Our leaders have forgotten what the country has been through to get to where we are now. I am sceptical about where their allegiances lie.”

Naidoo explains that although freedom has been achieved, the struggle is not over. Instead, South Africans are now battling less obvious “enemies” such as greed and corruption. “Back then, we were battling apartheid, which was more obvious. Now, the enemy has changed its face and is more subtle. The victory will come when there is no more poverty and we have an equal chance of opportunities.”

His family was politically and socially conscious, and this awareness is reflected in the music Naidoo makes today. His granduncle, Marcus Solomon, who was imprisoned on Robben Island for 10 years, was particularly responsible for raising Naidoo’s awareness of the social ills of apartheid.

Solomon used the 1987 film, Cry Freedom, in which Denzel Washington plays Black Consciousness Movement leader Steve Biko, to help teach Naidoo about the past. “He gave me a good understanding of what apartheid was at that young age.”

The musician credits his friend, the late Reece Timothy, for encouraging him to become a jazz drummer. However, it was after meeting Alan Webster that his jazz education broadened. Webster, the Standard Bank National Youth Jazz Festival director, introduced Naidoo to John Coltrane’s Blue Train album, which started his musical education. “That was how I got into the history of jazz and learned the music.”

At present, Naidoo is putting together The Bridge, a big band ensemble consisting of South African, Swedish and American artists. He is also working on a science-fiction inspired piece named Contact, which is based on American astronomer Carl Sagan’s fictional novel of the same name. “Science fiction gives complex messages in a creative way. I write music based on imaginary scenarios.”

The message of Contact, he says, is about the unfamiliarity you experience when you first meet people from upbringings different from your own. “When we meet people from different backgrounds they seem alien to us. But if we make an effort to know each other, we will notice we are not that different and we can relate to each other.”

It is a message that is reflected in Naidoo’s life as a jazz musician. Through his music he has met and played alongside numerous artists from various backgrounds, including Abdullah Ibrahim, Miriam Makeba, Bheki Mseleku and Jimmy Dludlu. Yet he feels he has only had the opportunity to play with these jazz legends because of Mandela’s activism against apartheid and the subsequent freedom it brought. “I have a lot more opportunities that many of my older colleagues did not have when they were making music in the past.”