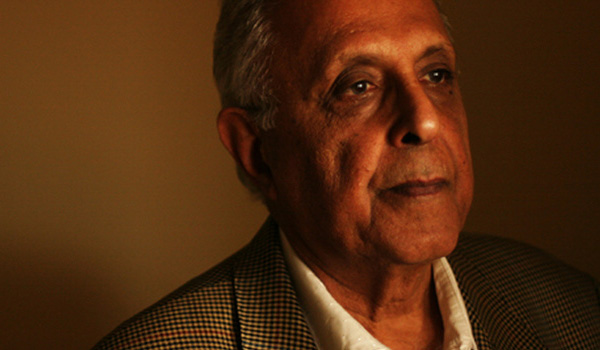 “It’s not easy to talk about Madiba,” Ahmed Kathrada said at the third Mandela Colloquium in Johannesburg this week.

And then proceeded to spend almost an hour talking about his affectionate memories of Nelson Mandela, mostly in the present tense – perhaps giving a sense how present Mandela still is in his life, even after his death three months ago.

Kathrada spent 26 years in prison with Mandela on Robben Island and in Pollsmoor Prison in Cape Town. Although there was an 11-year age gap between the two – Mandela was the elder – they became close friends. They were both accused in the Treason Trial (1956-1961) and in the Rivonia Trial. Eight members of the African National Congress (ANC) were sentenced to life imprisonment in 1964 in the latter trial.

Kathrada, now 84, was released in 1989 and became a member of parliament. He was parliamentary counsellor to Mandela when he was president from 1994 to 1999. He obtained four degrees while in prison, and has written three books since being released. In 1992, he received the Isitwalandwe Award, the ANC’s highest award for sacrifice in the freedom struggle; he has also been awarded four honorary doctorates.

He first met Mandela in 1946, when he was a teenager at school, and boasted to his classmates that he knew someone who was at university. But what struck him, even at that age, was how Mandela spoke to everyone as equals. “He made me feel comfortable.”

Recounting how prison brought out the “strengths of human character”, Kathrada spoke about his friend’s strengths. Mandela was always eager to learn everything; for example, one day they found a chameleon in the prison garden. Then it appeared with six babies and there were immediately questions as to how it reproduced, and Mandela wrote to ask outsiders for the information.

This inquisitive quality was combined with a need to be very thorough about everything he tackled. When the ANC decided to take up arms to fight apartheid, for example, Mandela got every book he could to read about armed struggle, recounted Kathrada. Or when he learned to play chess in prison. He ordered books on chess, and when playing, every move was laboriously thought out, requiring extreme patience on the part of his opponent. Tired of waiting so long, one young opponent gave up and allowed Mandela to win. “Every move was calculated,” explained Kathrada.

“He doesn’t kill a bee or a snake or any living things.” The cells had ants, which annoyed prisoners, but Mandela wouldn’t kill them. At Pollsmoor, where the two men shared a cell with the late Walter Sisulu, Andrew Mlangeni and the late Raymond Mhlaba, a cricket kept them awake one night with its chirping. No one was prepared to get up and kill it, but eventually Mandela got up, opened the window, and placed the cricket outside. It still chirped and kept everyone awake, but he hadn’t killed it. Once he drove over a snake. He stopped the car and went back to check on the snake. The only time Kathrada saw his friend kill a creature was when he swatted flies to feed the chameleon.

He was always slow to anger, Kathrada said, and in all the years in prison, he only witnessed Mandela “with real anger” twice.

Kathrada was overwhelmed by Mandela’s courage. When they were on trial for sedition in the Rivonia Trial, with the death sentence hanging over them, Mandela said that no one was to apologise or ask for mercy; and if it was to be the death sentence, they would not appeal it. He had prepared a few lines if it was to be the gallows, based on his long address to the court before sentence was passed. But of course he never delivered those words before they were sentenced to life imprisonment. “It required courage to conduct the trial in the face of death.”

When they got to Robben Island, Kathrada, being Indian, was offered more privileges than Mandela and the others. Kathrada wanted to reject this unequal treatment, but Mandela advised him: “You are making a big mistake – don’t give up what you’ve already got.” And this week, Kathrada said: “Mandela was right – we’ve got to fight for equality.”

And Mandela always treated everyone as his equal. When others were ill with flu and unable to leave their cells, he and three new arrivals collected, emptied and washed their toilet buckets, placing them in the sun afterwards. “All his life he struggled for equality and justice.”

No preferential treatment for himself was another trait. They worked for 13 years in the island’s quarry, chopping stones mindlessly. Mandela and others had problems with high blood pressure, but refused treatment. At about the same time he was approached by the apartheid government with an offer of release, on condition that he live in the Transkei in isolated circumstances, but he turned it down. Another similar offer came 18 years later; again he turned it down.

He was a democrat, Kathrada said simply. He had a request once from his nephew, chief Kaizer Matanzima of the Transkei, to visit him on Robben Island. “He was keen to see [his nephew] but we rejected the request, and he went along with the majority decision.” The request was turned down because Matanzima was a puppet of the apartheid government – he was the president of Transkei, a Bantustan. These were several areas set aside in South Africa by the government, reserved for black people, in an effort to separate the races. They offered meaningless presidencies.

After several years in Pollsmoor Prison, Mandela was taken to a separate house in the prison grounds. “That’s when he took the initiative to speak with the other side,” said Kathrada. “It was a bold decision although it was ANC policy. He didn’t want to consult with others who would have disagreed with him, which would have meant he would have had to obey the majority decision. That was Madiba.”

His strength as president was that he always consulted with others, and liked colleagues to be open with him. “I don’t think prison changed us in any way, except that we came out stronger.” In fact, they were protected in prison, because it was their comrades on the outside who were at the cold face of the struggle. “This was one of the things that kept our spirits up.”

Mandela’s love of children was well-known. It was very difficult for him and others not to see or touch a child for 20 years. “That was our greatest deprivation in prison.”

Journalist and writer John Carlin, in his book Knowing Mandela, recounts how Mandela, after 23 years in prison, persuaded one of the warders with whom he had become close friends, to bring his new baby into Mandela’s cell for him to hold. Christo Brand had been offered a promotion but it would have meant leaving Pollsmoor Prison, so he turned it down, to be with Mandela. “One of the sorrows of prison life for Mandela was never having the opportunity of contact with children,” writes Carlin. Brand smuggled his eight-month old child into the prison and into Mandela’s cell. “He took Riaan in his arms and he loved it. I think I saw tears in his eyes,” Carlin quotes Brand as saying.

On his release in February 1990, Mandela was whisked away in a car and “got lost” in the suburbs of Cape Town for several hours before he appeared at the Grand Parade for his first post-prison speech. “I learned later that Mandela rolled down his window to greet a mightily surprised young white couple walking in the neighbourhood with their twin babies. Fortunately, they were a liberal-minded pair who happily acceded to Mandela’s request that they pass their children through the car window for him to hug.”

The inaugural Mandela Colloquium lecture was delivered by Edna Molewa, the minister of water and environmental affairs. The second, by Gwede Mantashe, the secretary-general of the ANC, was delivered on the night that Mandela died, on 5 December 2013.