The rings were presented at the Nelson Mandela Foundation in Johannesburg on Thursday, at an event marking the university’s 90th anniversary and coinciding with the two-week long celebrations of Mandela’s 88th birthday.

President Thabo Mbeki’s late father, Govan Mbeki, was among those who were honoured posthumously. His award was received by his grand-daughter, Nobantu Mbeki.

Dali Tambo, who received the honour on behalf of his father, said Oliver Tambo had “exemplified the rare kind of students then, largely because he and the others studied in a horrible atmosphere .

“The facilities of the school at the time were so poor, but all of them emerged with bright brains that made them warriors,” Tambo said.

Buthelezi, who joined the ANC Youth League while studying at the university between 1948 and 1950, told BuaNews after receiving his award that it meant a lot to him because “it brings back sad and interesting memories,” adding that the university had helped him fulfil his dreams.

Mokgokong said he felt humbled to receive the award in the company of people like Mandela.

Fort Hare Chancellor Dr Danisa Baloyi said she hoped “the students of today [would] learn from these giants in their approach to life”.

The eight handcrafted rings were made by a female-owned jewellery company from Virginia in the Free State. 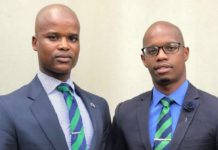