South Africans will be able to watch a free morning screening of Mandela: Long Walk to Freedom at selected cinemas across the country on 18 July, Nelson Mandela International Day.

The Nelson Mandela Foundation and Ster Kinekor have partnered for the screenings, enabling members of the public to watch the 9.45am show of the award-winning biopic at any of 31 selected cinemas, on a first come, first served basis.

The film, which covers Mandela’s extraordinary life journey from his childhood in a rural village through to his election as president of South Africa, pays tribute to the revered world statesman who dedicated his life to the struggle against apartheid and the fight for freedom.

“We are delighted to host South Africans for free in our cinemas to be inspired by this magnificent film based on our Madiba’s magnificent legacy,” Ster Kinekor CEO Fiaz Mohamed said. “We hope that many will leave our cinemas motivated more readily to serve others and serve our country.”

Producer Anant Singh said his company had partnered with the Nelson Mandela Foundation on Mandela Day activities since its inception, and was delighted to continue the association.

“We hope that the audience watching the film will be inspired to give back to their communities by following Madiba’s example,” Singh said.

Nelson Mandela Foundation CEO Sello Hatang said Madiba’s value system “rests on three pillars: free yourself, free others and serve every day. Let us all emulate the servant leader we loved by all becoming servant leaders ourselves.”

Nelson Mandela International Day was officially adopted as an annual international day by the United Nations in November 2009.

The idea is to do something of benefit to those around you on the day, which was inspired by Mandela himself when he said, at his 90th birthday celebration in London’s Hyde Park in 2008: “It is time for new hands to lift the burdens. It is in your hands now.” 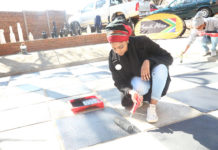