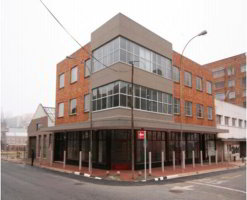 Chancellor House in downtown Joburg
has regained its dignity, and will soon
house a law library and legal clinic. 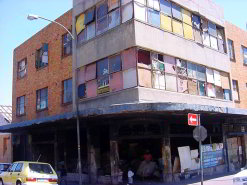 The run-down building before the
restoration team moved in.
(Images: Lucille Davie)

Johannesburg’s Chancellor House has been reborn, and although the offices of Mandela & Tambo Attorneys are empty, the spirit of the two icons is almost tangible in the building.

The modest three-storey building, in Ferreirasdorp in the CBD, has had its dignity restored.

The city’s executive mayor Amos Masondo and his team presided over the launch of the refurbished building in early May, after a seven-month, R7-million (US$1-million) restoration process overseen by the Johannesburg Development Agency.

“We meet to celebrate the opening of the fully-restored Chancellor House – a historic building that was used as a legal firm by both Nelson Mandela and Oliver Tambo in the 1950s,” he said.

“If bricks could talk this building would be replete with colourful stories about the struggles for national liberation.”

Special guest George Bizos, a long-time friend of and legal counsel to Mandela, warmly recounted anecdotes of the two attorneys.

“Mandela had a wonderful presence,” said the veteran lawman of his close friend.

Bizos added: “I am very pleased about the initiative of the city to restore the building. It is a living structure, a living space in honour of Nelson Mandela, Oliver Tambo, Duma Nokwe, Mendi Msimang, Godfrey Pitje, and others.”

He also paid tribute to the Essa family from Polokwane in Limpopo, who have owned the building since 1943.

“They played a role because they took a chance in allowing the attorneys to stay [in a white area], although they couldn’t always afford the rent,” he explained.

Other guests included members of the Sisulu and Mandela families, and Hlula Msimang and Mosizwe Macamo representing attorneys Mendi Msimang and Dumi Nokwe, who worked at the firm in the old days.

The building, a derelict disaster for the past 10 years, was restored using old photographs, said Lauren Segal, the curator of the Chancellor House exhibition. The tall ceilings and interior pillars inside the building are more elegant than the exterior promises.

The ground floor has had its large street window fronts re-instated. Parquet flooring, gleaming and warm, covers the ground floor as well as the three offices on the second floor of the Tambo and Mandela offices, which overlook the Magistrates’ Courts across the road. The rest of the office space has grey carpeting, and all walls are crisp white.

The other rooms have been opened up to create spacious, open-plan offices, with toilets and kitchens running along the north side on each floor. Additional facilities include a new fire escape and lift.

The original entrance on the Fox Street side has been restored, and boasts a spacious new courtyard, with plants and benches.

The building also received a new roof, because the original one was damaged by fire and water seepage.

Some 68 homeless people had to be removed from the building and relocated to a Johannesburg shelter, before city management could expropriate the building. Around 30 skips of rubbish were removed to allow a proper assessment.

From 1952 to 1960 Mandela and Tambo ran a busy practice in the building, at times bringing in other colleagues when they were defendants in trials, such as the Treason Trial, for which they were arrested in 1956.

In an article titled “Save Chancellor House” in the April 1999 issue of the local attorneys’ journal De Rebus, attorney Norman Sher recalled his association with the building. While studying for his matric in the early 1950s, Sher worked as a clerk in the firm of Berman & Berman, which occupied the second floor of Chancellor House.

He wrote: “It seems like yesterday and I can see them firmly imprinted in my mind: Nelson Mandela, a most imposing figure with a charming and genial personality, and Oliver Tambo, in contrast, with his deep penetrating features, a quiet and dignified man who spoke very softly in well-modulated and precise sentences.”

He described their offices as “neat and orderly” but crowded with people wanting help with obtaining passes, a process which involved “overcoming almost insurmountable obstacles”.

Sher acted as a messenger for Tambo and Mandela, and often fell down the narrow staircase while trying to deliver messages at speed. Mandela nicknamed him “Haasie”, Afrikaans for rabbit, a gesture which he cherishes to this day “with fond memories”.

He was paid in kind for his messenging duties, with meals at Kosi’s Cafe on the ground floor of the building – “an institution in itself that played host to many famous personalities”. In turn he delivered lunch – a daily batch of samoosas from Kosi’s – to the attorneys.

Sher says that the three of them became good friends. “Little did I realise then what an important role Mandela and Tambo were to play in the future history of our country.”

A museum is to open at the end of May, along the ground-floor windows and outside the building, said Segal.

At the launch she explained that a search of the National Archives in Pretoria has unearthed valuable documents, including letters, previously unseen photographs, banning orders, police correspondence stamped “Geheim/Secret”, invoices, and court admission material, relevant to the Mandela and Tambo practice.

“It is a very exciting find, it felt like new stuff,” she said. The material has been deposited with the Nelson Mandela Foundation.

The three offices of the law firm will house a library containing a collection of digitised documents of legal cases handled by the two icons. Blown-up photographs with text will fill each of the ground windows, allowing passersby to participate in the exhibition.

“The various exhibitions will be designed to celebrate the history of this area, of the building and of the people who walked through its doors. Many of them were giants of our history, but also ordinary people in search for a better life, basic justice and elementary human rights,” said Masondo.

The search is on for new tenants, who will preferably have a legal connection.

Bizos indicated that he would approach the legal fraternity to ask them for help with maintaining the library and possibly running a legal clinic. “There are enough lawyers who have a social conscience.”

City management also plans to open the shuttered north entrance of the Magistrates Courts in Fox Street, to allow attorneys to cross the road to use the library and clinic.

“I trust that Chancellor House will remain a beacon of hope for all our people as we continue with our collective efforts to consolidate our freedom and deepen our democracy,” said Masondo.