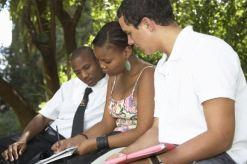 First-year students participated in a
day-long dialogue workshop aimed at
enabling them to think and act like the
university’s namesake.
(Image: Mediaclubsouthafrica.com. For
more free images visit the image library) 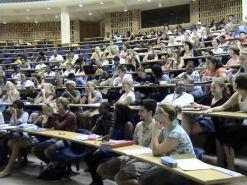 The goal of the programme is to reach
one-million youth by 2020.
(Image: openedpractices.org)

The Nelson Mandela Metropolitan University (NMMU) in Port Elizabeth is the first tertiary institution in South Africa to introduce a national project aimed at transforming students into life champions.

The youth programme, known as Nelson Mandela -The Champion Within (NM – CW), is a national project to equip young people in critical thinking, self-reflection and self-leadership skills.

The programme was jointly developed by The Nelson Mandela Centre of Memory and the Life College Group. Both are not-for-profit organisations based in Johannesburg.

The Life College Group is the brainchild of social entrepreneur and television news anchor Pat Pillai, who is also an Ashoka Globaliser Fellow. Ashoka is a global organisation that identifies and invests in leading social entrepreneurs that have innovative and practical ideas for solving social problems.

The programme draws on the vision and values of prominent South African leaders such as former president Nelson Mandela.

According to Verne Harris of the Nelson Mandela Centre of Memory, the programme is based on the book, Conversations with Myself by Nelson Mandela, as well as his extensive personal archive.

In a statement Achmat Dangor, CEO of the Nelson Mandela Centre of Memory, said that the goal of the programme is to harness the life-work of Nelson Mandela and his generation of leaders to build a nation of champions.

“Our goal is to reach one-million youth by 2020 and inspire them to make every day a Mandela Day,” Dangor said. “We will do so by partnering with and offering the programme to schools, universities, companies, civil society and government youth programmes.”

“The mindset of the nation and the youth is up for grabs,” he says. “Do nothing and we risk too much.”

Although the programme draws on the values of prominent South Africans such as Nelson Mandela, the programme encourages students to be authentic.

“It’s not about losing one’s own individuality, but rather a process of deconstructing the Mandela legend to get to the core principles by which he leads his life,” Pillai explains. “We want to help students be the best that they can be.”

Launching the programme in Port Elizabeth

The programme was formally launched at the Missionvale campus of the NMMU.

During the university’s orientation week, about 5 000 new first-year students participated in a day-long dialogue workshop aimed at enabling them to think and act like the university’s namesake.

The workshop was facilitated by Life College and NMMU facilitators in an innovative and fun way.

“Our belief is that we will only succeed in making our country and world a better place if each one of us lives the changes we want to see in the world,” NMMU vice-chancellor Prof Derrick Swartz said in a statement.

According to Swartz, the NMMU will repeat the programme every year until 2020 to achieve its goal of reaching 50 000 students.

“By scrutinising the Mandela legacy, students are asked to start thinking critically, to understand the power of their own purpose and to think critically about circumstances and choices, among other things,” Pillai says.

Guest speaker at the launch, NMMU chancellor Santie Botha said that Nelson Mandela is an outstanding role model for students.

“With this workshop we tell students how to learn from his greatness and to make it their own,” Botha said.

Round table facilitator Ruby-Ann Levendal, who is also the director for transformation, monitoring and evaluation at the NMMU, hopes the workshop discussions will help students to see themselves in a new light.

“It is really just about triggering a different, lateral way of thinking which our secondary education does not always give our youth,” Levendal says.

On completion of the programme, students are asked to sign a pledge to implement their personal action plans to achieve their champion status. Students also appoint their own integrity partners who will offer support and help them to achieve their goals.

Eighteen-year-old Chamonay Johnson who enrolled at NMMU for a LLB degree says she was surprised by how little she know about Nelson Mandela and his life.

For Johnson, the take home message of the workshop is that Mandela never gave up, and she hopes to apply this principle in her own life as a student.

“It does not matter what it takes, I will get my degree,” she says.

Apart from Madiba, the lives and achievements of other noteworthy life champions such as former Constitutional Court Justice Albie Sachs and Pick n Pay founder Raymond Ackerman, will also serve as inspiration to students.

The University of Cape Town, the National Research Foundation, Citadel, the Development Bank of South Africa and other project partners have also signed up for the programme.