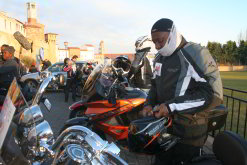 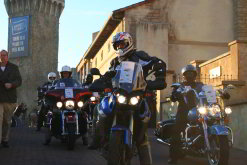 The big-hearted bikers set off for a week
of community service and upliftment.
(Images: Emily van Rijswijck) 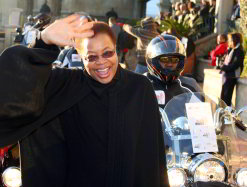 Graça Machel was on hand to see the
group off on their 2 200km journey.
(Image: Mandela Foundation)

The group will tackle a clean-up of
the Mandela Capture Monument in
Howick, where they’ll also plant a garden.
(Image: Ossewa, Flickr)

An excited bunch of 25 motorcyclists, among them actors, singers, DJs and businesspeople, set off from Montecasino in Johannesburg’s northern suburbs on 11 July, as part of their contribution to the Nelson Mandela Foundation’s (NMF) Mandela Day activities for 2011.

Collectively driving under the name Bikers for Mandela Day, the group will donate 67 minutes of their time at each of seven rural community projects across the country. The number 67 equals the years of the former statesman’s life spent in public service – including five years as South Africa’s first democratically elected president.

The slogan for this year’s event is Take Action. Inspire Change. Make Every Day a Mandela Day. The main sponsors of Bikers for Mandela Day are Spar and Vodacom.

The drive will take in more than 2 200 kilometres through some of South Africa’s more remote areas, and will keep the riders on the road for a week.

This year’s route covers the provinces of Gauteng, Free State, KwaZulu-Natal and Mpumalanga, as well as a drive-through section of neighbouring Swaziland.

The bikers return to Pretoria on Mandela’s birthday, 18 July.

This is the second year that celebrities and citizens alike participate in an initiative of this nature.

In 2010 about 30 riders, among them American actor Morgan Freeman, set off from Johannesburg to Cape Town, engaging in various community projects along the way.

Before setting off, Van Blerk said last year’s venture was “life-changing” to him and he hopes to make this year an even better experience. “What is important is to take the 67 minutes and make it go further.”

Straight-talking DJ Fresh reminded everyone that life is not just about you and that nobody is simply entitled to anything. His aim during this drive is to see how he can amplify the 67 minutes.

“I am a strong believer in random acts of kindness,” said Fresh. “Smile at your fellow motorists. Make a homeless person a sandwich. Do Mandela Day every day.”

On hand to see the bikers off was Mrs Mandela, Graça Machel. Her usual sprightly and cheerful self, she wished the participants all the best on the cold winter’s morning.

“Mandela Day gives us the chance to understand the deep goodness in all of us. Remember this makes us much better human beings,” said Machel, the former Mozambican first lady and now Mandela’s third wife.

According to Sello Hatang, spokesperson for the NMF, the activities for the 2011 Bikers for Mandela Day were selected for their long-term impact on and direct benefit for the communities involved.

This year’s drive will also have a strong animal focus with the participation of veterinarian Dr Kobus van der Merwe, who will be educating pet owners and treating animals at the community stop-offs along the way.

In addition, the Industrial Development Corporation will be using the ride to enhance its Nguni Cattle Project, which aims to reintroduce the indigenous and hardy Nguni species into rural communities.

Nguni cattle have traditionally been part of Zulu and Xhosa culture for centuries. The magnificent beasts are considered a sign of wealth and importance.

“The need for care and awareness of animals was something we noticed in 2010,” confirmed Zelda la Grange of the NMF and organiser of the event, who is also participating in the ride.

The first stop was the town of Harrismith in the Free State province, where the group restored playground equipment and repainted a jungle gym at a children’s home.

On 12 July the group continues to Howick in the KwaZulu-Natal Midlands, where they will clean the Mandela Monument and create a garden at the site where the former president was captured in 1962. The landscaping effort includes the planting of a Mandela’s Gold, a rare yellow form of the indigenous crane flower, Strelitzia reginae.

On July 13 the bikers head for a school and orphanage in the market town of Eshowe in KwaZulu-Natal, where they will install shelves in the school’s food storeroom, help staff in preparing food for the youngsters, and give the vegetable garden a makeover.

The next day, the bikers will be in Jozini in the heart of the province’s Zulu kingdom. Here they’ll team up with various community organisations to work in a soup kitchen, and will also tackle the house of a child-headed household, making much-needed repairs and improvements.

The group then makes their way through Swaziland to Mbombela, also known as Nelspruit, in Mpumalanga. While in the region they will lay a symbolic wreath at the late Mozambican president Samora Machel’s memorial site in the village of Mbuzini, on 15 July. This is where Machel and 34 other passengers, including other politicians, died in a plane crash in October 1986.

The bikers remain another day in Mpumalanga, first working with the Nelspruit Community Forum to restore a care facility for orphans. Later they’ll hand out school uniforms and clothing at a house for homeless children, before continuing to a disability centre in the farming community of Hazyview, just 80km from the Kruger National Park, to revamp a playground.

On 17 July the group will visit an orphanage in scenic Graskop, Mpumalanga, to create a vegetable garden from bare soil.

Before leaving the province the bikers will stop at a children’s home in the historic town of Belfast, now known as eMakhazeni. The home is desperately in need of upgrades to bedrooms and bathrooms, and this is the last project on the list.

Reflecting on the activities for 2011, Sello Hatang of the NMF said: “We hope people along the route and those following the ride will take inspiration from this example and live the Mandela Day ethos before and beyond 18 July, thereby helping to make every day a Mandela Day.”

Local municipalities, metro police and the South African Police Service will provide additional support at all stops along the route. The riders will be assisted by a support group of 15 staff members from the foundation.

Supporters are invited to gather at Pretoria’s Royal Elephant Hotel on 18 July for lunch, where they can celebrate the arrival of the group. The nearby Fezorati Coffee Emporium will offer meals, braais and snacks as an alternative should the main lunch be fully booked.

Since 2010, the occasion has been observed around the world as a day of taking action and giving back a small amount of time, doing a good deed for the sake of fellow human beings, the community or the environment.

Charity concerts have been on the international calendar since 2008 when the first birthday concert was held in London in Mandela’s honour, with subsequent events taking place in New York in 2009 and in Madrid in 2010. No international concert is planned for this year.

On the local front, various programmes and initiatives will be underway throughout the week. National carrier South African Airways is re-branding its entire fleet with the Mandela Day logo and will fly 93 underprivileged children from all nine provinces to the NMF, giving them their first experience on an airplane. The children will also receive special gifts and essential school items, including uniforms.

The South African Parliament is initiating a week-long programme, and in New York, a week-long exhibition at the UN’s headquarters is underway.

Make every day Mandela Day in 2011 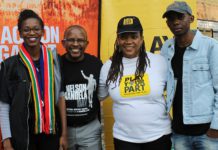