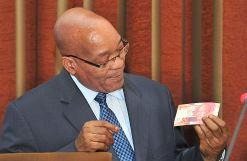 In a tribute to one of the world’s greatest leaders, Nelson Mandela, former president of South Africa and prominent anti-apartheid icon, will be the first living person to appear on South African banknotes.

The South African Reserve Bank (Sarb) announced that it will produce a new series of banknotes that will bear the image of prominent South African icon and former president, Nelson Mandela.

President Jacob Zuma said the new banknote series is a fitting tribute to Mandela, who has become a symbol of South Africa’s struggle for freedom, human rights and democracy.

“The banknotes will make us remember and appreciate our achievements in order to continue the journey towards a more prosperous society,” Zuma said.

Sarb’s announcement coincided with the 22nd anniversary of Mandela’s release from prison.

The former statesman served 27 years in prison, spending many of these years on Robben Island. He was released on 11 February 1990 from the Victor Verster prison near Paarl in the Western Cape, and went on to become the first black president of a democratic South Africa.

According to media reports, Mandela was consulted in person ahead of the Reserve Bank’s decision and he “was delighted” about the news.

Mandela’s former wife Winnie Madikizela-Mandela; his current wife Graça Machel; other members of the Mandela family; the Department of Arts and Culture; and the National Council for the Blind were also consulted.

A new look for SA’s banknotes

The Reserve Bank in consultation with Zuma and finance minister Pravin Gordhan agreed that the new note series will keep the same denominations, sizes and colours. The only change will be to the front of all notes, which will carry a specially-designed engraving of Nelson Mandela as the main illustration.

The reverse side of each denomination will retain aspects of the current note series and will have an image of either a lion, buffalo, rhino, elephant or leopard, collectively known as South Africa’s Big Five animals.

At the launch of the new banknote series, Sarb governor Gill Marcus said that the notes have improved security traits, and features for the blind and partially-sighted.

In keeping with international best practice, the security features of bank notes are upgraded every seven to 10 years to prevent counterfeiting.

The current note series was upgraded in 2005.

The redesign is also accompanied by a significant upgrade of the South African Bank Note Company (SABN), which is being modernised with state of the art printing equipment.

Existing notes still in use

Marcus said the Sarb will inform the public of changes to the country’s existing note series, and inform them when the new set will come into circulation.

A public outreach programme will be held to inform people of the changes. After the introduction of the new banknotes, existing notes featuring the big five will still be legal until they are phased out.

Marcus hopes that the new banknote series will be introduced before the end of the year.

The rand, which was introduced in 1961, is the common monetary currency traded between South Africa, Swaziland and Lesotho. The first series of rand banknotes displayed the image of Jan van Riebeeck, a Dutch colonial administrator and founder of Cape Town.

In the 1990s, the notes were redesigned with images of the Big Five animals.