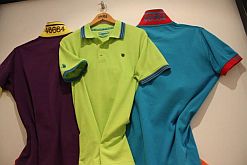 The men’s range of brightly coloured golf
shirts has 46664 as a logo. 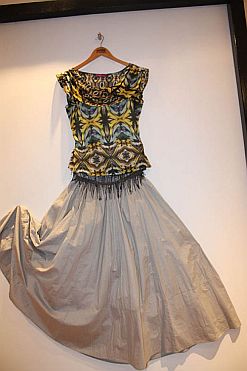 The women’s range of clothing will
reflect the latest trends in fashion.
(Images: 46664)

The Nelson Mandela HIV/Aids charity foundation 46664 has launched a clothing line, the proceeds of which will hopefully provide a source of sustainable funding for the organisation.

The clothing line will have “46664” as its official logo, the prison number Mandela wore during his term on Robben Island, just off the Cape Town coast.

The clothing line will be launched in August 2011 and will have a dedicated concept store in Johannesburg. It will also be distributed by Stuttafords.

The line will be designed by Brand ID, a division of Seardel, one of South Africa’s biggest textile and clothing manufacturers. There are future plans to get local and international creative teams involved as well.

Achmat Dangor, chief executive of the Nelson Mandela Foundation, said: “46664 needs reliable and sustainable income streams, something we believe the 46664 apparel can significantly contribute to.

“When you buy a 46664 shirt, you are not just buying apparel, you are investing in a process that will help spread the legacy of Nelson Mandela by supporting the long-term sustainability of 46664 and you will also be empowering young people in communities out there and creating a platform for global change.”

According to the foundation, the launch of the 46664 clothing line is a significant step in the organisation’s pursuit of the sustainability needed to take forward the humanitarian legacy, social justice projects and global awareness and prevention campaign of its founder, Nelson Mandela.

Stuart Queen, CEO of Seardel, said: “Seardel is very happy to be associated with a globally recognised and meaningful brand like 46664.

“This partnership is very much about creating globally benchmarked apparel that is unmistakably rooted in South Africa and appeals to consumers around the world. Part of our commitment is to have a positive impact on the clothing and textile industry.”

The men’s range includes brightly coloured golf shirts, jeans, trousers, blazers, print shirts like those worn by Mandela and hats. For the women, the designs will reflect the latest trends in female fashion, while also having extensive use of colour.

Bono, the lead singer of the rock band U2, also has a clothing line, Edun, which is 80% produced in Africa and 20% produced in Peru and China. The clothing line helps encourage trade with Africa by showing the endless possibilities Africa has for the fashion industry.

‘Good to give back’

The non-profit organisation 46664 was established in 2002. Pronounced four, double six, six, four, the figure denotes the fact that Mandela was prisoner number 466 of 1964, the year he was incarcerated on Robben Island.

The organisation was established as a global HIV/Aids awareness and prevention campaign to reach young people throughout the world through interaction with those they consider relevant, such as pop stars.

Now the organisation encompasses all humanitarian efforts of the Nelson Mandela Foundation.

The foundation has hosted world-class concerts where the likes of Beyoncé, Alicia Keys and Annie Lennox have performed for charity.

Projects that contribute to sustainable income for the organisation include the selling of the official 46664 bangle and the 46664 Vodacom Starter Pack.

Some of the organisation’s ambassadors are well-known music superstars such as Beyoncé, the African Children’s Choir, Baaba Maal, Aretha Franklin and Bob Geldof.

In 2010 a group of South African comedians did a one-night-only show to raise funds for the organisation’s charitable efforts.

John Vlismas, one of South Africa’s pioneering comedians, said at the time: “We make a living by poking fun at society, so it is good that we give back.”