There are just 218 days until 27 April 2014, when South Africa marks a significant milestone – 20 years of democracy.

In preparing for the anniversary, citizens have been urged to join the likes of Lead SA and Brand South Africa to pledge their support in building national pride and reflecting on how far the country has come in two decades. Along with the Department of Arts and Culture, Government Communication and Information System (GCIS) and Proudly SA, four initiatives in this vein were launched by Lead SA on 20 September in Soweto. 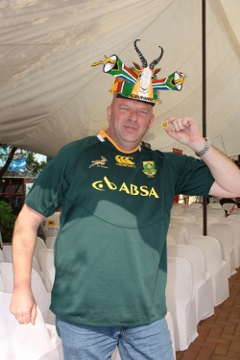 Richard Simmonds dressed for Freedom FridayFreedom Friday is a call on the nation to wear something every Friday that expresses their pride in being South African. This includes anything from a jersey of a favourite football or rugby team to traditional wear. Other projects to celebrate South Africa’s heritage as well as 20 years of democracy include 20 Hours of Volunteerism, between 20 September and Freedom Day, 27 April 2014; Wikipedia Wordathon, to improve South Africa’s digital footprint on the online encyclopaedia; and 20 Memorable Moments, which will retell people’s stories about their most memorable moment in the past two decades.

On 27 April 1994, South Africa cast aside centuries of discrimination and oppression to form a new society built on a foundation of freedom and democracy. This change marked the beginning of a united, non-racial, non-sexist, democratic and prosperous society. Lead SA’s Yusuf Abramjee kicked off the festivities for the launch of the initiatives by explaining the importance of having the event on Vilakazi Street.

“It is a great privilege to be here today as we make history. It is fitting that we gather in Vilakazi Street in Soweto, which enjoys a prominent place in the history of South Africa … We are here today to start a journey of reflection and celebration as we count down the days to 20 Years of Democracy on 27 April 2014,” he said.

“Some of you may recall every day since the first vote was cast on that day in 1994, and even the days, months and years before, while others were born to a free South Africa. We have a great opportunity to look towards the future with a greater understanding and appreciation of our past.” 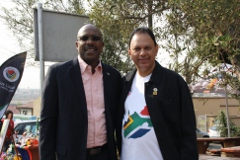 Brand South Africa’s chief executive officer Miller Matola and Lead SA’s Yusuf AbramjeeThe South African story, Abramjee said, was as unique as the people who made up the diverse and vibrant nation. It was a story of great sacrifice and perseverance; it was the stuff of legends.

An excited Miller Matola, the chief executive officer of Brand South Africa, spoke about 20 years being a significant milestone for all citizens. “We must all now participate in driving the future we would like to see for ourselves, our children and the generations of descendants who will come after us,” he said.

“Brand South Africa is inspired by the launch of the Freedom Friday initiative. We look forward to working with our partners on this initiative, as well as with all citizens to find new ways to celebrate our democracy, our freedom, our nationhood.”

Matola explained that through the National Development Plan citizens would be able to achieve a better future for all. “We must each of us play our part to make this a better reality.”

He concluded by quoting Nelson Mandela: “Let us never be unmindful of the terrible past from which we come, that memory not as a means to keep us shackled to the past in a negative manner, but rather as a joyous reminder of how far we have come and how much we have achieved.” 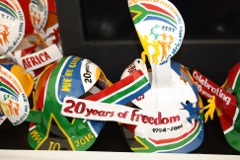 20 years of freedomAcknowledging the youth’s support and active participation, Abramjee introduced some inspirational schoolchildren. Among them were Madison Volkwyn; Jordan van der Walt, the Lead SA hero of the year; and Tshogofatso Dhlamini. Madison, a pupil at Redhill High School in Johannesburg, spoke about a business studies and design project that inspired her and a group of friends to give back to an underprivileged school in Orange Farm in the form of a colourful play area.

The group was instructed to go out and implement a sustainable, green corporate social responsibility project, “whatever you want, whatever you need, but you need to do it yourself”. “For us, being raised in homes that are very open and exposed to the current situations of the people in our country, we were hopeful that we could find somewhere where we could make an impact but we hadn’t gone looking specifically for a place to do community service,” she explained.

“Solwazi Primary School is a way of helping keep the children occupied during the day, educating them and helping to keep them off the streets, as many of these children are orphans. When interviewing the directors of the school, they expressed the importance of playing and felt that their students were being deprived of this aspect of their schooling, especially in the foundation phase of Grade R and grades one to three,” she said.

“Studies have shown that low-income children have limited opportunities to play. Having gone to a school such as Redhill, my peers and I have always had boundless opportunities … which I have no doubt has significantly helped us to this very day. When visiting the school, seeing those 600 children, playing in what could only be described as a flat, dusty playground, with no equipment and nothing to stimulate these children’s minds or provide a ritualistic form of exercise, it really sparked a desire in us to make a change, however small.”

Tshogofatso, a Grade 11 pupil at St Martin de Porres School in Orlando West, Soweto gave a moving speech about the importance of national heritage and pride. “Heritage is anything that we discover or know about the past. But heritage is not simply history – that which befalls us – it is rather what we choose to know, keep, and value from the past. Heritage is that part of our history which defines us and which we cherish.”

She said: “A shared heritage provides us with a common past, and this gives us a sense of identity and belonging … A shared heritage is like a rich mine from which we may select and emphasise that good that we choose to cherish and to celebrate with others. These aspects of heritage tie us to other human beings, often forming the strongest human bonds.

“One of the most important things about heritage is that it gives us a sense of identity, defining who we are, as well as seeing that we are part of something that is bigger than what we are, and something in which we can take pride,” she said.