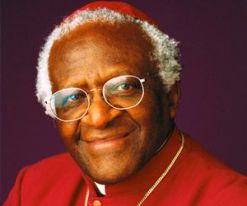 Archbishop emeritus Desmond Tutu is considered to be the moral conscience of the world.
(Image: Desmondtutuhivfoundation.org.za)

Charismatic human rights champion and Nobel laureate Archbishop Emeritus Desmond Tutu turns 82 today. Archbishop Tutu – or the Arch, as he is fondly known – is often considered the moral conscience of South Africa and the world.

A passionate opponent of the apartheid government and “rabble-rouser for peace”, he retired as archbishop of the Anglican Church in South Africa in 1996, and was given the title archbishop emeritus. He famously coined the term the “rainbow nation” when South Africa became a democracy in 1994.

Together with his wife of 58 years, Leah, they handed over a new sports ground at the Marconi Beam Primary School in Cape Town on Saturday, part of a series of community events they are undertaking to celebrate their birthdays. Leah’s birthday is on 14 October, when she will turn 80.

The Arch exudes love and tolerance wherever he goes, saying: “Nothing is too much trouble for love.”

The first black Anglican archbishop in South Africa, he is known for his love of life and for feeling its deep emotions – at times he holds his head in his hands, appearing to weep, at others he throws back his head and gives a high-pitched, healthy laugh.

Oppressed and the poor

He has devoted his life to the defence of the oppressed and the poor, promoting peace and reconciliation wherever he goes. He took up the fight against HIV/Aids and TB, and is the patron of numerous foundations and organisations. He is a close friend of spiritual leaders, political leaders, rock stars and ordinary people alike, from the Dalai Lama to Nelson Mandela to Bono.

He is the chairman of the Elders, an international, independent group of influential people chosen for their outstanding integrity, courage and proven ability to tackle some of the world’s toughest problems. Although he officially retired from public life in October 2010, he has continued to chair the Elders.

In the height of apartheid oppression in the 1980s, Tutu was awarded the Nobel Peace Prize, in 1984. Other awards recognised his contribution to the fight for human rights: the Albert Schweitzer Prize for Humanitarianism in 1986, the Pacem in Terris Award (a “Peace on Earth” Catholic award) in 1987, the Sydney Peace Prize in 1999, the Gandhi Peace Prize in 2007, and the US Presidential Medal of Freedom in 2009. He said: “Peace involves inevitable righteousness, justice, fullness of life, participation in decision making, goodness, laughter, joy, compassion, sharing and reconciliation.”

He has taken up the cause of gay rights, and in recent years has fearlessly spoken out against corruption in the ANC government. His targets are not only local: he controversially said that former British prime minister Tony Blair and former American president George W Bush should be tried for war crimes for their role in the Iraqi war.

The Arch has held several distinguished academic and world leadership posts. He was elected Fellow of King’s College; president of the All Africa Conference of Churches, London; chancellor of the University of the Western Cape; the William R Cannon Professor of Theology at the Candler School of Theology, Emory University, Atlanta; visiting professor at the Episcopal Divinity School, Cambridge, Massachusetts; visiting scholar in residence at the University of North Florida, Jacksonville; and visiting professor of post-conflict studies at King’s College.

In addition, he has honorary degrees from over 130 universities, including Harvard, Oxford, Cambridge, Columbia, Yale, Emory, the Ruhr, Kent, Aberdeen, Sydney, Cape Town, Witwatersrand, and the University of South Africa.

He has received many prizes and awards in addition to the Nobel Peace Prize, most notably the Order for Meritorious Service Award (Gold) presented by former president Nelson Mandela; the Archbishop of Canterbury’s Award for Outstanding Service to the Anglican Communion; and the J William Fulbright Prize for International Understanding in 2008.

In April 2013, he was awarded the Templeton Prize for his life-long work in advancing spiritual principles such as love and forgiveness. The prize is $1.7-million or R15-million, and previous winners include Mother Theresa and the Dalai Lama. The largest monetary prize in the world, it is awarded annually to “a living person who has made exceptional contributions to affirming life’s spiritual dimension”, though it has not been free of controversy.

He is known for his deep faith and commitment to prayer, believing everyone was created in the image of God. He espouses the values of ubuntu, saying: “A person is a person through other persons.”

After retiring from public life in 2010 – though he is never really out of the public eye – he devotes his time to the Desmond Tutu Peace Centre, a non-profit organisation founded and inspired by him and his wife. “The centre is committed to creating a society that nurtures tolerance and understanding amongst all people and is guided by the virtues that the Archbishop himself has identified as essential human values and the building blocks for sustainable peace: Love, Hope, Tolerance and Courage,” it states on its website.

The centre runs several programmes – the youth peace summit, young women’s leadership, schools for peace, public dialogues, and collaborations for peace. It “acknowledges that it is through the efforts of many that peace is achieved”.

In 1995, the Truth and Reconciliation Commission was established to allow South Africans to hear the truth behind the loss of their loved ones during the struggle, on all sides, both at the hands of the apartheid security forces and the freedom fighters, to hear about the human rights violations, and to grant amnesty where appropriate. Tutu was asked to chair the TRC, with public hearings of the Human Rights Violations Committee and the Amnesty Committee held around the country.

“Many people have asked me what I have learned from all the experiences of my life, and I say unhesitatingly: people are wonderful. It is true. People really are wonderful.”