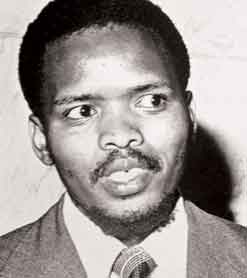 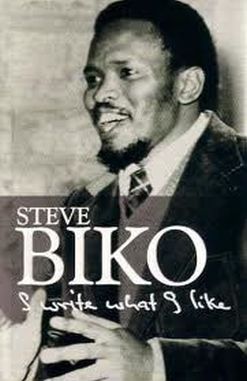 Steve Biko’s book I write what I like, is a collection of his writings.
(Images: Steve Biko Foundation)

Bantu Steven Biko would have been 67 years old today. But he died at the hands of the apartheid security police at the age of 31.

He was born just outside King William’s Town in the Eastern Cape in 1948 and was a tall, handsome man with a charismatic personality. Biko was a founder member of the South African Students’ Organisation, from which the Black Consciousness Movement developed, with the slogan “Black is beautiful”.

Biko said in his book I Write What I Like: “When you say ‘Black is beautiful’ you are saying, ‘Man you are okay as you are, begin to look upon yourself as a human being’.”

From the students’ organisation, a number of umbrella organisations were formed, one of which was the Black People’s Convention, which played a role in the Soweto riots of 1976. In the uprising, school children took to the streets to protest against the imposition of Afrikaans as a medium of instruction. Hundreds died on the day, but it ultimately led to the unravelling of apartheid.

In 1973 Biko was banned and confined to the Eastern Cape. After the 1976 riots he was repeatedly arrested and by his final arrest on 18 August 1977 he had been in and out of jail repeatedly, including spending 101 days in solitary confinement.

He was held naked and manacled at the Walmer police station in Port Elizabeth. On the morning of 6 September he was taken to the security police offices in the Sanlam Building and interrogated until 6pm, when he was again handcuffed and shackled.

He was examined and transferred to the prison hospital and given a lumbar puncture which revealed blood in his spinal fluid. It was decided to transfer him to Pretoria, a 1 200 km journey that took 11 hours, with Biko lying naked in the back of a Land Rover. He died on 12 September 1977 in the Pretoria prison hospital later that night.

His death caused a worldwide outcry which temporarily stopped the deaths in detention but they resumed a year to two later. In all 115 people died in prison between 1963 and 1990. Biko was the 41st South African to die in police custody. Only two decades later, during testimony before the Truth and Reconciliation Commission, did members of the security police admit that they were responsible for his death.

His wife, Ntsiki, said of his death in detention: “I think Steve expected to die in the hands of the security police. I think all of us expected it. But Steve was prepared to sacrifice his life for the black cause. He felt his work was so important that even if he died it would be worth it.”

And Biko himself said of dying, in his book I Write What I Like: “You are either alive and proud or you are dead, and when you are dead, you don’t care anyway. And your method of death can be a politicising thing.”

His parents believed in the value of an education, and made sure all their children received schooling.

Although his school career was outstanding, Biko’s political ambitions were threatening to overtake it. He was expelled from the missionary school Lovedale House just three months after he started there. He completed his education at the liberal Catholic boarding school St Francis, near Durban, in KwaZulu-Natal and then enrolled for a medical degree at the University of Natal, now the University of KwaZulu-Natal.

Here he began to devote more and more energy to his political career. He joined the multi-racial National Union of South African Students (Nusas), but was unable to progress through its leadership ranks because power was held by students attending white universities. Frustrated, Biko founded the South African Students’ Organisation (Saso) in 1968, which was only for black students.

The main aim of this new organisation was to educate and convince black people that they were not inferior to white people, as they had been repeatedly told and had come to believe. This was the seed of the Black Consciousness Movement (BCM). According to Biko, it was only by breaking away from this negative mindset that black people could rise above their desperate situations and “break the chains of oppression”.

The apartheid government had been monitoring Biko’s political activities, and eventually banned him in 1973. This meant that he could not talk to more than one person at a time, was not allowed to leave King William’s Town, had to report to the police station once a week and was prohibited from writing anything about the BCM.

But Biko’s commitment to the cause was so strong that for the next few years he defied the banning order by speaking at meetings and covertly distributing his Frank Talk publication. Through the BCM he also held educational classes in health, dressmaking and general literacy.

The BCM’s influence was felt in the Soweto riots of 1976. The event is now commemorated annually on 16 June, Youth Day.

The principles that he stood for live on today through a series of programmes run by the Steve Biko Foundation.

Based in Johannesburg, with an office in King William’s Town, the foundation exists to carry on the late leader’s work and ideals, especially that of community development, which is a key element of the restoration of dignity and a sense of worth and identity to people.

“We investigated other organisations that walked the path of preserving the legacies of people like Malcolm X, Martin Luther King, and Nelson Mandela,” said his son and chief executive officer, Nkosinathi Biko, “before we established our own organisation.”

The foundation focuses on a three-part strategy. Firstly, it promotes dialogue and advocacy around issues of significance to the public. This mainly takes the form of two high-profile lectures: the Steve Biko Memorial Lecture and the Robert Sobukwe Memorial Lecture in honour of the late Pan Africanist Congress founder. The PAC was a breakaway political party, from the ruling African National Congress.

The foundation’s second thrust is to promote leadership development in South Africa.

The third focus is a research and policy unit that will investigate development aspects such as education, housing and poverty alleviation, as well as the intangible aspects of culture and history.

The Steve Biko Centre, in a township near King William’s Town, aims to translate global interest in the legacy of Steve Biko into a developmental resource for the region.

Biko is buried in the Steve Biko Garden of Remembrance, also in King William’s Town.