An exhibition at the British Museum is showcasing South Africa’s diverse history, heritage and art from thousands of years ago up until today. It is the first time the golden treasures of Mapungubwe are leaving South Africa. They are part of South Africa: The Art of a Nation. 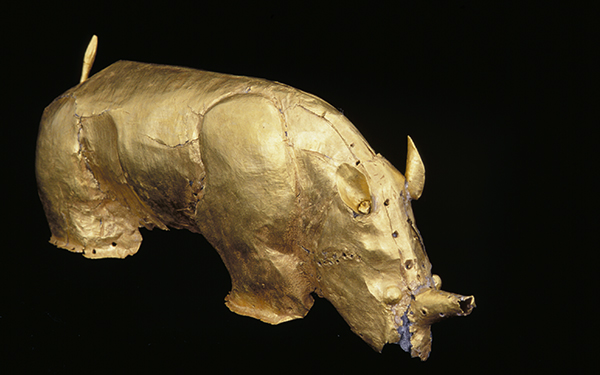 The gold rhino of Mapungubwe, the centre of an ancient southern African kingdom, leaves South Africa for an exhibition at the British Museum called South Africa: The Art of a Nation, from 27 October 2016 till 26 February 2017. (Image: © University of Pretoria)

The gold treasures of South Africa’s Mapungubwe, fashioned after animals such as a rhino, a cow and a wild cat, as well as objects such as a sceptre and a bowl, bring forth visions of a fanciful city of gold. But this is, in fact, reality.

These treasures form an integral component of a new exhibition at London’s British Museum, titled South Africa: The Art of a Nation. It opens on 27 October 2016 and runs until 26 February 2017.

Four of these gold creations will be leaving the country for the first time to be exhibited alongside other South African artwork.

“The exhibition will shed light on the varied artistic achievements of South Africa with around 200 objects arranged chronologically across seven key episodes from the country’s history, from ancient history to the present day,” explains the museum.

“Each section is illustrated with artworks by contemporary artists that provide new perspectives regarding South Africa’s past.”

The exhibition is a chance to explore the long and diverse history of South African art and challenge audience preconceptions in the way visitors have come to expect from a British Museum exhibition, says museum director Hartwig Fischer.

About a thousand years ago, Mapungubwe – in today’s Limpopo – was the centre of a thriving kingdom in southern Africa, with robust trade with China and India.

Mapungubwe is the earliest known site in southern Africa with evidence of a class-based society. The kingdom’s leaders were separated from the rest of the inhabitants, and the golden figures were discovered in three royal graves.

It proved there were developments and artistic productions at the start of the second millennium. It also showed that complex societies existed before the arrival of colonial Europeans.

“This history was hidden during the apartheid era, when the colonial concept of ‘terranullius’, the myth of an empty land, was used to legitimise white rule,” says the museum.

The gold rhino of Mapungubwe has become a feature on the country’s national orders, the Order of Mapungubwe. The rhino is also a symbol of leadership among the Shona people of Zimbabwe.

An ancient shell bead necklace, dating from about 77 000 years ago, will also be in the exhibition. It was discovered at the Blombos cave in the Western Cape

“These kinds of finds really push that back a lot earlier, and it is only really in the last couple of decades that the tradition has been identified, so it is a really nice time to be telling this story.”

Other items on display

Measuring 2m wide, a tapestry called ‘The Creation of the Sun’ (2015) will also be on display. It is a collaborative piece from the Bethesda Arts Centre, in the famous village of Nieu Bethesda in the Karoo.

“The artists at the centre are descendants of South Africa’s first peoples, San/Bushmen and Khoekhoen, who have been inspired by archival recordings of their ancestors’ beliefs to produce contemporary representations of their founding stories, such as the creation of the sun,” says the museum. 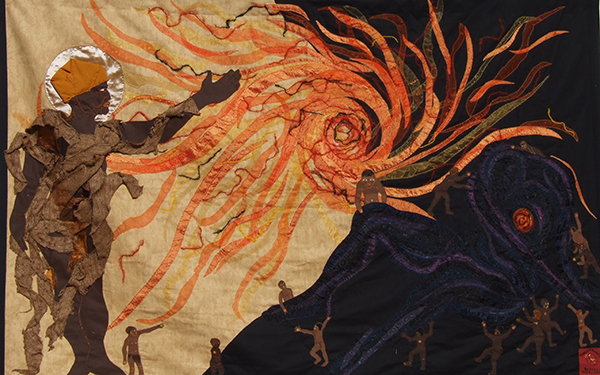 ‘The Creation of the Sun’ is to be in the South Africa: The Art of a Nation exhibition at the British Museum, from 27 October 2016 till 26 February 2017. It is a collaborative piece from Bethesda Arts Centre, in Nieu Bethesda in the Karoo. Jeni Couzyn is the artistic director and Sandra Sweers is lead artist. (Image: © The Bethesda Foundation)

Other historical works and contemporary art will join the exhibition. There will be a self-portrait by Lionel Davis, a video featuring Candice Breitz, and a 3D installation by Mary Sibande, as well as pieces from respected artists such as Willie Bester, William Kentridge and Santu Mofokeng.

The museum notes that the contemporary art scene in South Africa is dynamic and has a rapidly growing global reputation.

A nod to diversity

Giblin says the exhibition has a such a variety of South African art, which he hopes will reflect the country’s diversity. “What underlies the story is that South Africa’s art heritage is the art heritage of many: many different peoples, whether South Africa’s first peoples, San bushmen or Khoekhoen herders. Or the Bantu language speakers who arrived around 500AD and are responsible for the Mapungubwe gold objects, and their descendants who make up the majority of black South Africans today.

“Or European and Asian people who arrived from the 17th century, including Dutch, British, Indian, Indonesian and Chinese and all of their descendants.”

Summing up, the museum says the exhibition will be an eye-opener for visitors of South Africa’s long and diverse history. “Through the exploration of key episodes and objects from throughout the country’s history, it will reveal unique insights into South Africa today.”