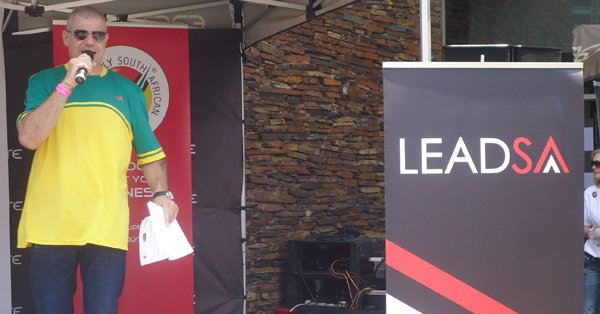 Talk Radio 702 presenter Aki Anastasiou said that the road show celebrated democracy. “It reflects on freedom and it reflects on our country. (Image: Melissa Jane Cook)

South Africans congregated at Eastgate Mall on the eastern edge of Johannesburg on Valentine’s Day to celebrate Freedom Friday. It was a time to show their love for South Africa, and mark the countdown towards the 20th anniversary of democracy in the country.

Freedom Friday is jointly hosted by Brand South Africa, Lead SA, Proudly SA, the Department of Arts and Culture, and the Government Communication and Information System. It is aimed at encouraging South Africans to celebrate their freedom and democracy – and their essential “South African-ness” by wearing whatever makes them proud to be South African. This can be the colours of the national flag, traditional attire, national soccer or rugby team jerseys, or anything else that reflects 20 years of democracy.

Monica Newton, the deputy director-general of Arts and Culture, said the countdown campaign was just one activity aimed at mobilising South Africans behind the 20 years of freedom celebrations. “We are rolling out the countdown campaign to certain malls across the country as we get closer to April 27, which marks our 20th anniversary of democracy.

“We’ve come a very long way, but even though we still have a long journey ahead of us, as a nation, we need take this opportunity to recognise and celebrate the huge gains that we’ve made in education, health and housing to mention a few,” Newtown said. “Things have changed for everybody since 1994 for the better; hence we are encouraging South Africans to celebrate their achievements and to continue working together to take our democracy forward.”

Her department has been mandated to drive the mobilisation programme. At Eastgate on Friday, there was song and dance from GB Collective and Unknown Virus. They expressed what the last two decades has meant for them. GB Collective has been developing a musical since 2005, focusing on the struggle against apartheid and transition to democracy. The objective of the project is to educate and inspire today’s youth about the country’s history and future. 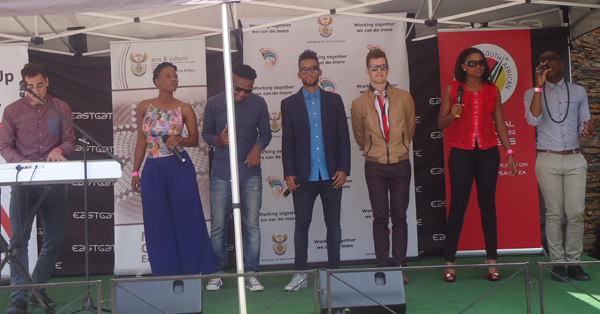 GB Collective has been developing a musical since 2005, focusing on the struggle against apartheid and transition to democracy. The objective of the project is to educate and inspire today’s youth about the country’s history and future. (Image: Melissa Jane Cook)

Apart from being entertained by moving, powerful songs of democracy and hope, those at the event were given South African flags and copies of the government newspaper, Vuk’uzenzele, and the Public Sector Manager Magazine. This idea is to use the day for all South Africans to come together and participate in activities that promote a common South African consciousness.

The campaign is running across various social media platforms and interactive experiential zones in malls nationwide, as well as at OR Tambo International Airport. People will be encouraged to share their personal stories of what freedom and democracy means to them. Experiential zones in malls include an Express your Freedom location where, for example, people can contribute to graffiti boards. A collection of these will be on display during the official ceremony marking the anniversary of democracy, on 27 April.

“We are living a part of history. Let’s share our positive stories and be active on social media. We all have the ability to do a small thing that makes a big difference,” said Catherine Constantinides, an executive from Lead SA.

Talk Radio 702 presenter Aki Anastasiou said that the road show celebrated democracy. “It reflects on freedom and it reflects on our country. We have a beautiful country and a beautiful Constitution and people have sacrificed their lives to be here. This freedom is what it is all about. Let’s ask ourselves, what can we do to make a difference to those around us?”