National Orders are the highest awards that the country, through its president, can bestow on its citizens or eminent foreigners. This year, the 21st year of the ceremony, awards were handed to sports leaders, cultural luminaries, and a host of veteran activists, both local and foreign. 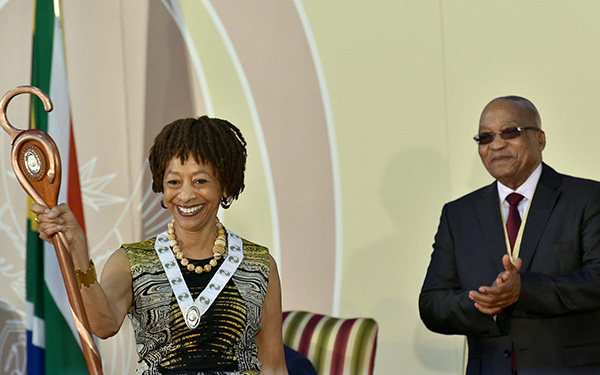 President Jacob Zuma bestows the Order of the Companions of OR Tambo in silver to Professor Gay McDougall from the United States during the National Orders Awards ceremony at the Sefako Makgatho Presidential Guest House in Pretoria on 8 December 2015. (Photo: South African Government, Flickr)

“I am so thrilled to get this honour today, especially in the name of OR Tambo who was one of the true heroes of my life,” said Professor Gay McDougall from the United States when she received South Africa’s National Order of the Companions of OR Tambo.

“I first met Tambo in London in the late 1970s; that was the door opener for me and the African National Congress (ANC),” she recalled.

McDougall was one of the five international members of South Africa’s 16-member Independent Electoral Commission (IEC) that organised the first democratic elections in 1994. She was honoured for her work in a ceremony held at the Sefako Makgatho Presidential Guest House in Pretoria on 8 December.

National Orders, the highest awards the country can give, are bestowed on individuals from South Africa and abroad, who have contributed to the advancement of democracy; who have excelled in various endeavours; and who have made a significant impact on improving the lives of South Africans in various ways.

McDougall said receiving the order brought back memories of the country’s history – the liberation struggle and the political transition from apartheid to democracy. “I remember walking to get thousands of South Africans out of jail, [those] who were detained on political charges,” she said. “I remember being here for the country’s first democratic elections. There are so many memories brought by this.”

She recalled how she helped Nelson Mandela to cast his ballot paper during the democratic elections in 1994, which was a tremendous honour for her, and the anxiety they felt about pulling off those elections.

“I remember most of all 27 April 1994, when the sun came up and all the problems faded away, and long lines of people waiting to vote peacefully and quietly,” she recollected.

The Order of the Baobab

The Order of the Baobab is awarded to South African citizens for distinguished service well above and beyond the ordinary call of duty.

The baobab, an indigenous African tree, is symbolic of endurance, tolerance, community and longevity. It has long been a valued symbol of vitality, a tree endowed with both magical and functional properties: it provides bark for cloth and rope, fruit, fuel and other useful products. The distinctive baobab, characterised by its stature and appearance as an “upside down” tree, has for centuries been used as a meeting place for communities.

The Order of Ikhamanga is awarded to South African citizens who have excelled in the fields of arts, culture, literature, music, journalism or sport. This award is made in three categories: gold for exceptional achievement, silver for excellent achievement, and bronze for outstanding achievement.

It is named after South Africa’s second national flower, known in English as the strelitzia.

The Order of Luthuli

The Order of Luthuli is awarded to South Africans who have made a meaningful contribution to the struggle for democracy, human rights, nation-building, justice and peace, and conflict resolution.

It is named after Chief Albert Luthuli, whose leadership during the Defiance Campaign against apartheid won him the Nobel Peace Prize in 1960.

The Order of the Companions of OR Tambo

The Order of the Companions of OR Tambo is awarded in three categories to eminent foreign nationals and foreign dignitaries for friendship shown to South Africa. It takes into consideration matters of peace, co-operation, international solidarity and support and is integral to the execution of South Africa’s international and multilateral relations.

Former African National Congress leader OR Tambo played a pivotal role in building the international anti-apartheid movement. He set up the first missions of the then-banned ANC in Egypt, Morocco, Ghana and the United Kingdom.

Symbols reflected in this order include the majola or mole snake, which is symbolic in African mythology for friendship, protection and active support; the walking stick, which is symbolic of support and commitment; and the universal yin and yang symbol, connoting a meeting point of diverse spiritual energies.

The Order of Mapungubwe

The Order of Mapungubwe is awarded to South African citizens for achievements that have had an international impact and have served the interests of the country.

The Kingdom of Mapungubwe existed a millennium ago in the northern part of South Africa. The kingdom had a developed mining, metallurgy and agricultural industry, and traded with countries as far afield as China. Various elements in the Order’s design symbolise new horizons, creativity and excellence, as well as human resourcefulness.

The Order of Mendi for Bravery

The Order of Mendi for Bravery is awarded to South African citizens who have performed an extraordinary act of bravery that placed their lives in great danger, or who lost their own lives including in trying to save the life of another person, or by saving property, in or outside South Africa.

The lapel rosette is for outstanding courage in the face of danger. The decoration is dedicated to the South African troops who lost their lives in 1917 when the SS Mendi was destroyed. The ship was struck and cut almost in half by another ship, the SS Darro, while crossing the English Channel from Britain to France during World War One.

Running for the 21st year, in 2015 the ceremony was held at the Sefako Makgatho Presidential Guest House in Pretoria.

Originally, it was scheduled to take place on Freedom Day, 27 April. However, this was postponed because “the country was mourning the passing of four South Africans and three citizens of other countries who were killed during violent attacks directed at foreign nationals in Durban and Johannesburg”, noted the South African Government News Agency.

The Order of Mendi for Bravery was bestowed on:

Jetro Ndlovu for his outstanding contribution to the fight for freedom, equality and democracy in South Africa

Joe Morolong (posthumous) received the silver order for his excellent contribution to the fight for liberation in South Africa. “He endured tremendous personal persecution for the ideal of a democratic and liberated society,” said the chancellor of the National Orders, Dr Cassius Lubisi

Caleb Motshabi (posthumous) for his excellent contribution to the fight for the liberation of the people of South Africa; he facilitated the creation of safe passage for many young people who went into exile to fight for freedom

Eric Mtshali for his excellent contribution to the fight against apartheid

The Order of Ikhamanga was awarded to:

Ramakgobotla John Mekoa for his excellent contribution to the development of jazz music in South Africa; he established a jazz music centre that contributed to the growth of the careers of many South African jazz musicians

The Order of the Baobab was given to:

Mary Makobatjatji Malahlela (posthumous) for her excellent contribution to the provision of medical services to oppressed South Africans during apartheid; she was one of the first African women to qualify as a medical doctor in South Africa

Andrew Ross for his excellent contribution to the training of young rural medics; his work has provided hope to communities that use rural hospitals

Otto Stehlik for his excellent contribution to economic and social development in South Africa; his business skills in the hospitality industry have benefitted South Africa significantly

James David Lewis-Williams for his exceptional and distinguished contribution to the field of archaeology; his research on the rock art of the ancient people of Southern Africa has contributed invaluable knowledge about their lives and times

The Order of Luthuli was given to:

Kay Moonsamy for his outstanding contribution to the fight for democracy and freedom in South Africa; as a trade unionist, he was among the leading figures who actively fought the apartheid system

William Frankel for his excellent contribution to the fight against apartheid; he played a significant role in raising funds for those detained by apartheid security forces and those charged under apartheid legislation

Mohammed Tikly for his excellent contribution to the fight against apartheid; he assisted many young freedom fighters while he was director of the Solomon Mahlangu Freedom College during the days of exile

The Order of the Companions of OR Tambo went to:

Gareth Evans from Australia for his excellent contribution to and support of the anti-apartheid movement; his leadership influenced the Australian public to provide scholarships for underprivileged South African students at home and in exile

Ambassador Vladimir Kazimirov from Russia for his excellent contribution to the recording of the plight of the majority in Southern African countries, especially South Africa, during the period of minority rule

Lars Nordbo from Denmark for his excellent contribution to the struggle for liberation and for his architectural skills that saw him build dormitory blocks in Mazimbu, Tanzania, which housed South African freedom fighters in exile; these blocks were later converted into a Tanzanian university

Dr Lim Kok Wing from Malaysia for his excellent and commendable contribution to the fight against apartheid and to education internationally, with a special focus on Southern Africa

Professor Gay McDougall from the United States for her excellent contribution to the fight against the injustices of apartheid; she mobilised policymakers in the US in support of the struggle for freedom in South Africa and put to use her legal expertise for the defence of political prisoners in South Africa and Namibia.