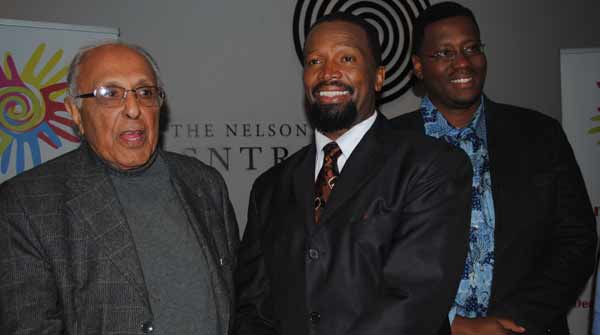 Ahmed Kathrada, Sello Maake KaNcube and Shaka Sisulu at an event held to commemorate the Rivonia Trial, at the Nelson Mandela Centre of Memory in Johannesburg. (Images: Romaana Naidoo)

Ahmed Kathrada reminded young people of the importance of education, and urged them to take full advantage of opportunities available to them.

The anti-apartheid veteran was speaking at an event held to commemorate the Rivonia Trial, at the Nelson Mandela Centre of Memory in Johannesburg. Students – some from as far afield as the United States – were able to ask Kathrada about the time he spent on Robben Island with his comrades.

June 12, 1964 marked a significant change in the lives of many men, in the dock for their steadfast ideal of a non-racial, non-sexist South Africa. This year we celebrated those very men, who became the leaders of our new nation. It was a special day as it reflected on those men who stood together and fought for the freedom which South Africa has today. Yet there are still struggles to overcome, and the tone of the event inspired everyone to step up for their beliefs.

South African actor and director Sello Maake KaNcube read an extract from Kathrada’s testimony and said: “Today we are riding on the shoulders of those who chose to survive.”

Verne Harris, the head of the Memory Programme at the Nelson Mandela Foundation’s Centre of Memory and Dialogue, said: “This room where we are listening to Ahmed Kathrada is a very significant room; many celebrations and celebrities have been held here, and most importantly Nelson Mandela used it often. This room has the capacity to bring young people together, they are the future and they are the ones who can create meaningful dialogues.” 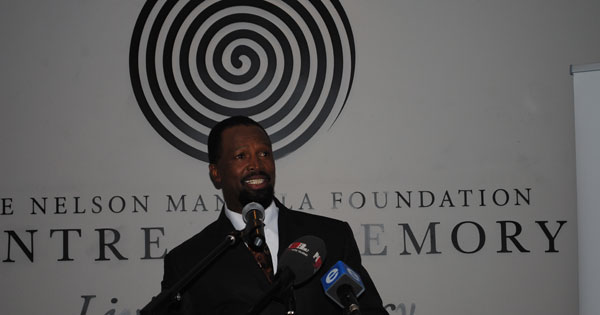 South African actor and director Sello Maake KaNcube read an extract from Kathrada’s testimony and said: “Today we are riding on the shoulders of those who chose to survive.”

Significance of the trial for the youth

Shaka Sisulu, grandson of the late Walter Sisulu, swept up to the podium and with his fist pumped in the air, bellowed “Amandla!” The crowd responded euphorically with “Awethu!” It was amazing how this “Amandla! Awethu!” had become a national slogan, he said. “Some of the greatest moments of history are being infused into our story of today. Today, we all share the Rivonia Trial as it is significant to all of us.”

Amandla is an isiXhosa and isiZulu word meaning “power”; “awethu” or “ngawethu” means “to us”. The words were a popular rallying cry in the days of resistance against apartheid, used by the African National Congress (ANC) and its allies. In a traditional pattern of call and response, a leader of a group would shout “Amandla” and the crowd would answer “Awethu” or “Ngawethu”, completing the South African version of the rallying cry “Power to the People!” The words are still associated with struggles against oppression.

Sisulu said that when the Rivonia trialists were arrested it was difficult to speak out. It was hard to voice what they wanted, and these were issues that the South African and the world media did not cover. “This [the Rivonia Trial] was the first time that we were given a platform, as previously many black people did not have a voice. Even though in the trial people lost their lives and their freedom, they had a platform to voice their feelings.”

Kathrada, fondly known as K or Uncle Kathy, said that once the prisoners were taken to Robben Island, the prison became an academy, “a space where prisoners walked in illiterate and walked out able to read and write; we educated each other”. Throughout the trial they had expected they would be given the death penalty. But when they were sentenced to life in prison, there was a collective sigh of relief. As soon as they were sentenced they were taken in the night to Robben Island. He said the first thing they did was focus on education. Under gruelling conditions the emphasis was always on education. He told the story of Dikgang Ernest Moseneke, who today is the deputy chief justice of the Constitutional Court; he arrived at Robben Island when he was just 15 years old.

Nobody left Robben Island illiterate. He told another story of a boy who arrived with a Standard Two education; today he is the president of South Africa, Jacob Zuma. “There would be no trial if young people didn’t get involved.” Kathrada urged the young people to try different things, agitate for change, use different platforms and become the heroes and leaders of tomorrow. 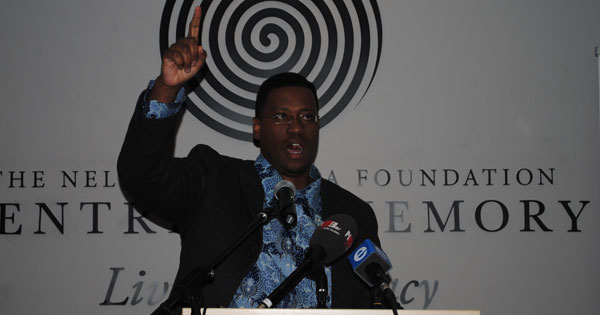 Shaka Sisulu, grandson of the late Walter Sisulu, swept up to the podium and with his fist pumped in the air, bellowed “Amandla!” The crowd responded euphorically with “Awethu!”

Reflections on the past

The anniversary of the trial was an opportunity to relive the history of 1964, he added. At that time the 90-day Detention Law was in force. It allowed the police to detain suspects without trial, without access to a lawyer, and without books. The police were the only visitors, with the threat of “hand over information or you will die”.

“It was a rainbow nation of people standing together, making a political statement, white, black, coloured, Indian. We wanted the world to see apartheid was not only blacks vs whites but against humanity. This day is not only about history, it is about lessons. We must support the struggles of others and not just our own. It’s about human struggles.”

In prison, he recalled, there was always the realisation that they were protected. No policeman could come and shoot them. But the comrades were at the coal face of the struggle, they were not protected and many activists were tortured to death, hanged or assassinated.

Despite all the atrocities, in prison they came to terms with reconciliation and forgiveness. “This is unheard of for political prisoners to feel these feelings but we dealt with our anger in prison. The trial was a stepping stone to preserve our leaders to be the best leaders.

“There was no bitterness, anger and revenge. These are negative emotions and people who harbour these emotions, will suffer more. We never lost hope; we wanted to build a united South Africa. We have achieved a lot over the last 20 years, but the most important thing was that we have gained our dignity. You can have all the wealth in the world, but if you have no dignity, you have nothing.”

The trial, named for the Johannesburg suburb in which members of the ANC’s armed wing (Umkhonto We Sizwe or Spear of the Nation) hid out and were captured, was a gruelling one for the 11 accused. On 20 April 1964, Nelson Mandela gave a rousing address in the courtroom.

It was a defining moment in the trial when Mandela condemned the court as unlawful, saying that its decisions were cruel and unjustified and that objecting to such rulings was critical. His speech from the dock is a milestone in the struggle against apartheid, articulating why the ANC instigated what came to be known as the armed struggle and Mandela’s willingness to sacrifice his own life to achieve equality and freedom for all South Africans.

The armed struggle was a tactical response to the apartheid regime’s increasingly brutal crackdown on dissenters; in response, in December 1961, the ANC launched a sabotage campaign. Hoping to “bring the government to its senses” the resistance movements blew up public buildings, railway tracks and power lines.

The state countered with assassinations, detention without trial, and torture, and on 11 July 1963 the police raided an ANC hide-out, Liliesleaf Farm in Rivonia, arresting the majority of the trialists. At the time Mandela was already in prison, serving a five-year sentence for leaving the country without a passport; for his clandestine trip around Africa in 1962; and for incitement, having played a role in planning a three-day strike against South Africa becoming a republic in 1961.