It has been a century since South African and other soldiers lost their lives in World War I. The refurbishment of the Delville Wood South African National Memorial in France means that every South African soldier who fought is now honoured. Previously the contribution of black soldiers was sidelined. 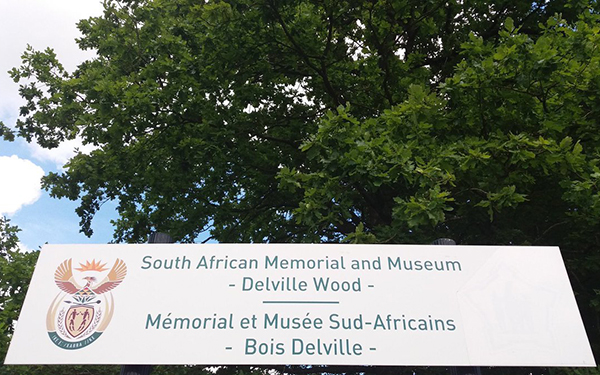 South Africa’s participation in World War I is commemorated with the refurbishment of the Delville Wood South African National Memorial to include all the soldiers of all races who lost their lives in the battle and the war. (Image: Yusuf Abramjee, Twitter)

It is little known that a century ago South African troops from all races fought in one of the bloodiest battles in World War I.

The Battle of Delville Wood took place in France, in July 1916. It was a series of engagements in the 1916 Battle of the Somme between the armies of the German Empire and the British Empire and was the first major clash South Africa undertook during the Great War. The commander, Brigadier General Lukin, received the order to “take and hold the wood at all costs” from 14 to 20 July 1916.

“For six days and five nights a soldier was killed every minute, with one South African soldier dying every three minutes,” said President Jacob Zuma during the centenary commemoration at the site of the battle. “The brigade was tasked to ‘break through the enemy lines by any means necessary’.”

Watch this in-depth look at South Africa’s contribution to World War I:

Black soldiers who enlisted formed the South African Native Labour Corps (SANLC), but its contribution has largely been ignored in military records.

“The SANLC has hardly received any attention in South African histories,” noted the Department of Military Veterans. “Nor did they receive any medals for their participation in the war.”

The original Delville Wood South African National Memorial was inaugurated in 1926 at Deville Wood, built on a 63ha piece of land bought by author and politician Sir Percy Fitzpatrick, and presented to South Africa. “The representation of Africans during the war is very minimal and it distorts the important role they played in various theatres of war,” said the department.

The SANLC mainly provided a supportive role to soldiers because they weren’t allowed to carry weapons for two reasons, said Zuma.

“First, giving black and white South Africans the same roles in the war was seen to accord blacks the same status as whites, contrary to the then dominant political ideology.

“Secondly, General Louis Botha and the ruling white elite feared that training blacks in the handling of firearms would empower them to, in future, use such military expertise to fight white supremacy.”

Black soldiers were also buried not in Delville, but in other areas in France.

“The injustice that we have to redress is that the Delville Wood Memorial Museum in the past reflected a very biased South African military history,” said Zuma.

The refurbished memorial is now reflective of the full story of South Africa’s contribution to the war.

The battle of #DelvilleWood became one of the deadliest Somme engagements of WWI. @PresidencyZA @VeteransZA pic.twitter.com/1QGFd2IsVR

A memorial wall now includes the names of every South African who fought during the war.

There is a Garden of Remembrance for those who perished but whose remains were never found.

The Deville Wood Museum will also house a new exhibition. “Care has been taken that the new murals in the museum will depict the involvement of the SANLC in the Great Wars, as well as the sinking of the SS Mendi,” said Zuma.

The refurbishment presented a powerful message of reconciliation and provided “some redress that will further consolidate the diversity of our South African nation”.

All South Africans should be proud of the achievements of the men in Delville, he said. “Let their ideal be our legacy and their sacrifice our inspiration.”

It is a reference to the words on the archway of the memorial:

“Their ideal is our legacy

“Their sacrifice our inspiration”