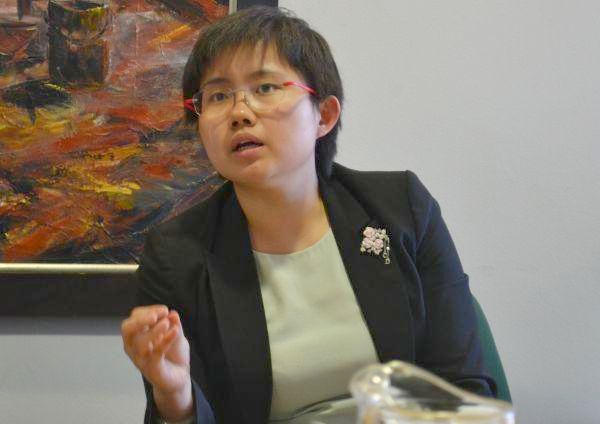 Chinese journalist Wang Yu was one of six foreign reporters invited by Brand South Africa on a tour of the country’s most ingenious scientific and engineering projects. (Image: Shamin Chibba)

When Ngozi Onuoha, a journalist from New York city, first landed in Johannesburg this week, she was amazed to find it resembled her hometown. “I’m really shocked at how urban Johannesburg is. It’s just amazing how similar it is to New York.”

And for Washington DC journalist Peter Mellgard, the city was like a tropical London. “It’s not because of the weather but it just didn’t feel like the rest of Africa. It’s more developed.”

Onuhoa and Mellberg are part of a group of foreign journalists and bloggers invited by Brand South Africa for what is known as an innovation tour. Since landing in Johannesburg on 22 March, the group has travelled across four provinces, visiting some of the country’s most innovative projects, including a robotics centre at the Council for Scientific and Industrial Research (CSIR) in Gauteng, the Greenside Colliery in Mpumalanga, and the World Design Capital and the Square Kilometre Array SA office in the in the Western Cape.

Onuhoa was born and raised in New York City to Nigerian parents who had settled in the US. Because of this she considers herself as much African as she is American. She added that her background played a role in the way she viewed South Africa. “What people are doing, how people are doing things and the way of thinking seems so different to anywhere else in the world. South Africa is so unique in that you have development and poverty. America has poverty but people sort of brush it under the table. But here it is something that is talked about and people ask, ‘How do we answer those problems?'”

She is looking to relocate to Johannesburg at the end of this year but her fiancé, an Ivorian, is looking to settle in East Africa. “We’re still trying to figure that out. But I’m also here to observe how people are living every day. It forms a large part of my reporting.”

British reporter Sinem Bilen-Onabanjo arrived in South Africa dispelling all perceptions she had of the country so that she could see it for what it really was. “I come from a very multicultural background so I know not to believe what I hear about foreign countries. I came with an open mind and I’m glad I did.”

The group visited Mandela House – the home in which Nelson Mandela lived with his family before he was sent to prison – in Soweto, prompting Bilen-Onabanjo to say she believed South Africa had made peace with its past. “It’s taken it for what it is, and it’s just an amazing thing to witness for me instead of reading it in the media or seeing it on the news.”

Chinese journalist Wang Yu, who writes for the liberal Beijing publication Caijing Magazine, said South Africa was far more advanced than other African countries she had visited in terms of its economy and infrastructure. She also pointed out that Johannesburg’s busy traffic was a key measurement of the country’s economy.

Wu Ning Ning, a Beijing journalist for Global Times, said the South Africa she had seen on the tour was very different from the reports of social upheaval normally depicted in Chinese media. “The few Chinese who know of Soweto think it’s full of violence. But when I went there, I found that it was famous for having two Nobel Peace Prize winners in Nelson Mandela and Desmond Tutu.”

Youth at peace yet disconnected with the past

Bilen-Onabanjo said South African youth’s seemingly peaceful existence was, to a certain extent, a sign of their disengagement from the past. And Mellgard thought their disconnection from history and politics may not bode well for the future of the country. “It’s surprising how everybody says the youth is just not concerned; they hear the stories but they are just disengaged in a big way from the legacy of apartheid and the politics.”

With a large part of the vote coming from the born-free generation, it was startling to see that many of them did not care about the upcoming elections, he said. “I was struck by how it seemed many young people cared about other things much more than politics, such as entertainment. But in that way they are like young people everywhere.”

Wu also observed this trend among the born-free generation, saying they were similar to Chinese youth. She would aim to write a comparison between the two groups. “They have a lot of issues that are similar and they have their own special problems.”

Telling our own stories

Bilen-Onabanjo writes for FAB Magazine, a lifestyle and fashion publication focused on Africa. Originally known as Fabulous African Black, FAB, she said, strived to do away with the negative stereotypes mainstream media had created about Africa by telling positive stories. “We don’t need Condé Nast to come and tell our stories. We can tell them ourselves.”

To her, South Africa was more than just a tourist destination and the stories she aimed to write would reflect this. “When people look at South Africa the first thing they think of is Cape Town, tourism and the beaches. I think it’s good to see the scientific and innovative side.”

Since she also writes for the business magazine New African Woman, she said her next story would examine how women in South Africa had progressed in business and science since the end of apartheid. She was particularly taken with Natasha Govender, a young computer scientist specialising in robotics research at the CSIR. “She has perhaps left a better-paying job to work in an academy and it’s one of her passions to engage with women and encourage more women to go into sciences. So I think women in the economy and their role is definitely coming across as a strong story.”

Mellgard hoped his articles for The American Interest magazine would get Americans curious about South Africa. “I came here knowing Americans in general, and people who read my magazine in particular, don’t care very much about Africa and South Africa. When you tell Americans about South Africa, they’ll say diamonds, Mandela and race, but there’s obviously more to the country than that. So hopefully I will be able to get my readers to care about other things.”

For Chinese readers, Wang said the transformation of South African society following apartheid was intriguing. “Most Chinese are not familiar with the policies such as black economic empowerment. We hardly write about South African economics. In Chinese media we normally discuss things related to us or near us.”

Wu would take a similar angle to her stories for the Global Times, with a greater focus on development. “I want to write a comparison between South Africa’s development model and the Chinese model, which will get Chinese readers to think more [about] our own problems from South Africa’s perspective.”

She also wanted to look at the strength of South African unions and the mining strikes that had distracted operations in recent years. “In China the unions are weak. So I will give the readers the whole picture and provide deeper insights into the strikes.”