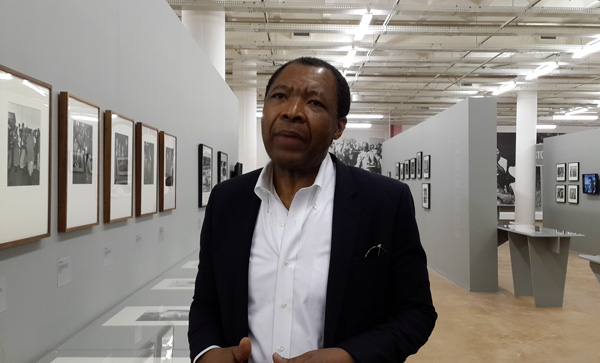 “The exhibition emerges at a very important juncture of the history of South Africa,” said curator Okwui Enwezor of his Rise and Fall of Apartheid photographic exhibition, which was timed to coincide with the country’s celebrations of 20 years of freedom. (Image: Lucille Davie)

Around 800 photographs that “require a double take” and “slow you down and call for a response” fill two floors of Museum Africa in Johannesburg, in a monumental exhibition entitled Rise and Fall of Apartheid: Photography and the Bureaucracy of Everyday Life.

Opening on Thursday 13 February, the exhibition features almost all South Africa’s significant photographers, and a handful of foreign ones. Co-curator Okwui Enwezor, adjunct curator at the International Centre of Photography in New York, walked journalists through the exhibition before its opening. More than 70 photographers and artists are showcased in the exhibition, which is accompanied by 27 films and a book.

Enwezor pointed to two images by world-renowned South African photographer David Goldblatt. One is of a hedge planted in 1660 to separate the Khoikhoi from the first white settlers in Cape Town, symbolising the beginnings of segregation. The other, taken three hundred years after the hedge was planted, is a photo of District Six, a neighbourhood in Cape Town where freed slaves, artisans and labourers settled, but which was declared a white area and flattened in the 1970s. Bulldozers can be seen in the photograph, systematically crushing homes and lives. Some 60 000 people were removed to the barren Cape Flats, and today District Six remains largely a wasted landscape.

Image after image speaks to the cruelty, injustice and outright insanity of apartheid, mostly in black and white. There’s a sequence of photographs stretching along a table, giving second-by-second snapshots of the horror of Sharpeville, south of Joburg, where 69 peaceful passbook protestors were gunned down by the police in 1960, leaving 180 wounded. The graphic photos catch in the throat.

“Sharpeville was the beginning of mass funerals,” said Enwezor. The world may not have known about the massacre, he suggests, if not for the photographs. 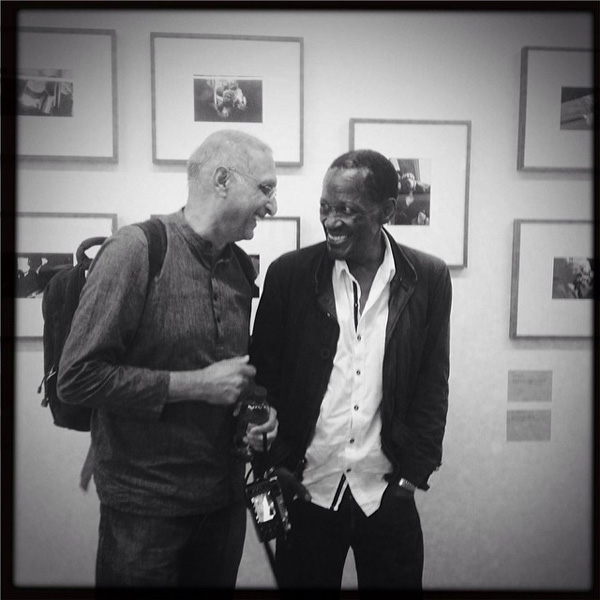 Past, present and future photographers

Work by contemporary artists who record the impact of apartheid as it continues to resonate today are also on the walls, among them Sue Williamson, Jo Ractliffe, Jane Alexander, Santu Mofokeng and Guy Tillim. A set of 10 short films of William Kentridge run continuously. And a new generation of artists and photographers are also represented, including Sabelo Mlangeni, Thabiso Sekgale and the Centre for Historical Re-enactments in Johannesburg.

Enwezor said he was “incredibly privileged” to have met many of the artists. Over 30 000 images from around the world were examined, he explained, but it was local photographers who portrayed apartheid the most succinctly. While many images will be familiar to South Africans, and equal number won’t, as he asked photographers to search their archives for unknown images.

“The exhibition emerges at a very important juncture of the history of South Africa,” he said.

The exhibition is on until 29 June, after travelling from Munich, Milan and New York, where it opened in September 2012. 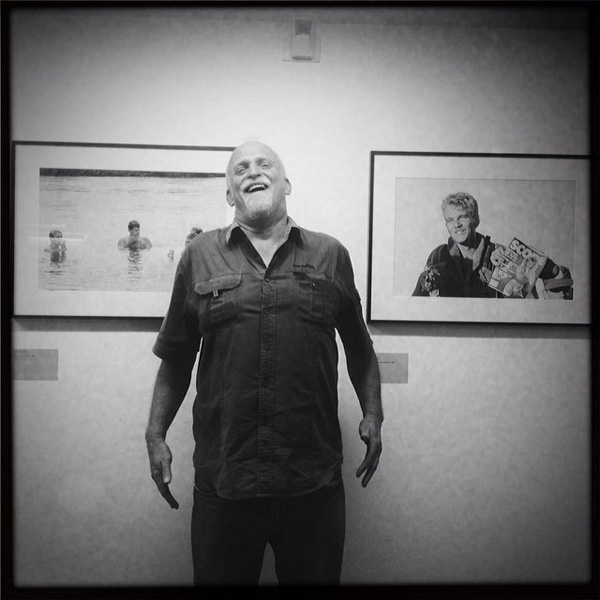 John Liebenberg poses next to his images of South Africa’s Border War with Angola. (Image © Rise and Fall of Apartheid)

It took about eight years of research, although the idea first came to Enwezor in 1994, he said. “In broad terms, the foundation for this exhibition evolved out of two interests of mine. The first was my intellectual and curatorial engagement with photography, with images of African photography. The second and related interest is how photographic images engender new possibilities for assessing what I call the African imaginary, particularly how Africans pictured and represented themselves and their social worlds.”

It examines “the aesthetic power of the documentary form – from the photo essay to reportage, social documentary to photojournalism and art – in recording, analysing, articulating and confronting the legacy of apartheid, including its impact on everyday life now in South Africa”, the organisers said in a statement.

Many of the photographs come from Museum Africa, where the exhibition is hosted. It is “fertile ground for debate across issues that will see the six-month long exhibition and its accompanying media participating in a national conversation about the photographers – some unknown, some deceased, some still practising here and abroad”, the statement said. 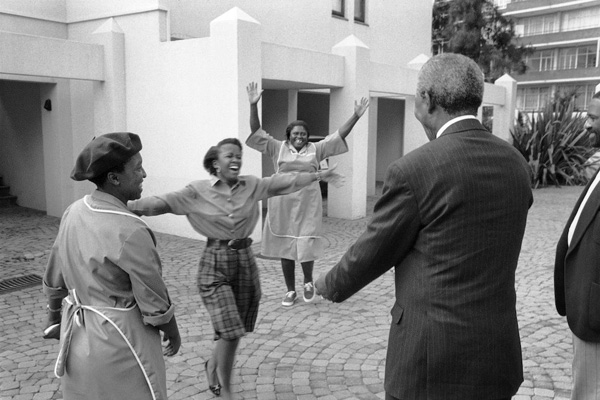 First Encounter, Johannesburg, 1994. Photo © George Hallett. “That picture with the women running towards Mandela, which I call ‘First Encounter’ – this was the first time they had actually seen him close up. And it was an incredible experience, because for the first time I saw the whole country, and the joy and the hope that people had. My God, I thought – it’s finally about to end, this crappy system of apartheid.” – George Hallett. Read more about Hallett in The photographer who showed Nelson Mandela to the world at Africa is a Country.

The exhibition has been curated by Enwezor and Rory Bester. Nigerian-born Enwezor is the director of the Haus der Kunst museum in Munich. He was the artistic director of La Triennale 2012 at Palais de Tokyo in Paris, and of many other international exhibitions. He has been appointed the curator of the prestigious Venice Biennale 2015, making him the first African-born curator in the exhibition’s 100-year history. He has written extensively on contemporary African art and artists, as well as on American and international art. At the age of 20 he moved to New York, and lives there and in Munich.

Bester is an art historian and critic, as well as a curator and documentary filmmaker at the Wits School of Arts at the University of the Witwatersrand in Johannesburg, where he is the head of history of art. His teaching and research include archive and museum practice, curatorial studies, exhibition histories, photographic practice and post colonialism. He writes art criticism for South Africa’s top investigative newspaper, the Mail & Guardian, as well as for Art South Africa, Camera Austria and Nka: Journal of Contemporary African Art. He has curated and co-curated a number of exhibitions in Denmark, Germany, South Africa, Sweden and the US.

Enwezor said the research for the exhibition involved numerous visits to archives, museums, universities, libraries, photographers, artists, curators and galleries in South Africa, Europe and the US. He laments the fact that although they ploughed through thousands of images, there were times when they faced what he calls “the case of the missing negatives”.

“On the one hand we had so many photographs, yet there were so many by different photographers that have been irretrievably lost,” he said.

Bie Venter, the logistics director of the exhibition, says she and a team of 15 have taken three weeks to ready the space and install the works. “One of the biggest challenges was the quantity of work,” she said. Work has involved creating numerous walls, installing lighting, and pasting up huge wallpaper images. Venter, who helped install the world-renowned Venice Biennale last year, says of Enwezor: “He is an incredibly good curator – he thinks deeply about things.”