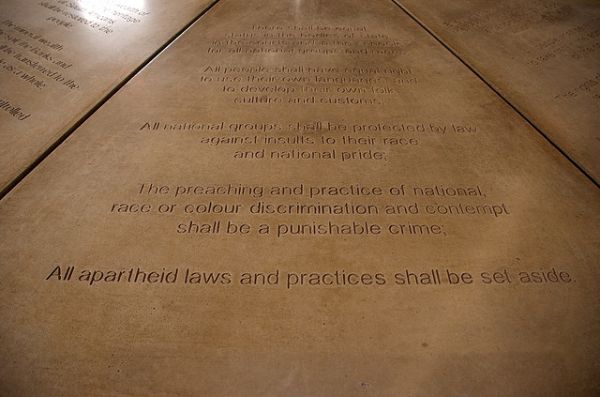 Harvard law scholar Cass Sunstein called it “the most admirable Constitution in the history of the world.” Ruth Bader Ginsburg, a US Supreme Court justice, praised it for dealing with modern challenges when she said, “That was a deliberate attempt to have a fundamental instrument of government that embraced basic human rights, had an independent judiciary … It really is, I think, a great piece of work that was done. Much more recent than the US Constitution.”

South Africa’s constitution is 18 years old and is rightly held up as a document worth emulating. Our Constitution is unique because it includes what constitutional scholars call “positive rights”. It requires the state to enact policies that minimise inequality. It frees South Africans from discrimination and redresses historical inequalities over personal choice, whether about who you love or reproductive rights.

Apartheid legislation denied people the right to vote, to work, to access education, to move freely, to love whomever they wanted to, to not be imprisoned without trial. South Africa’s groundbreaking Bill of Rights, Chapter 2 of the Constitution, changed all that. We take a quick look at how far we’ve come.

Compared to the apartheid era, where the majority had no political rights and parties opposed to apartheid were banned, all South Africans now have the right to freedom of association and are free to make political choices and campaign for any political party or cause.

Whereas the majority of South Africans were denied the right to vote during the apartheid era, every adult citizen now has the right to participate in free, fair and regular elections, the right to vote and to stand for public office and, if elected, to hold office.

All South Africans have the right to assemble, to demonstrate, to picket and to present petitions, provided this is done peacefully.

South Africans now have the right to freedom of expression.

The press and other media can express themselves freely and there is academic freedom and freedom of scientific research.

The Bill of Rights also makes provision for the right to access any information that is required for the exercise or protection of any rights. The freedom of expression does not extend to propaganda of war, incitement of imminent violence or advocacy of hatred based on race, ethnicity, gender or religion.

Compared to the apartheid era, all South Africans are now equal before the law and have the right to equal protection and benefit of the law.

While the apartheid state sought to deprive the majority of South Africans of their citizenship and controlled their movement through oppressive pass laws and other means, no citizen may be deprived of citizenship and everyone has the right to freely move through the country, reside anywhere and hold a passport.

Whereas the apartheid state reserved skilled jobs for white South Africans, all citizens now have the right to choose their trade, occupation or profession.

All citizens have the right to fair labour practices, to form and join a trade union and participate in its activities and programmes and the right to engage in collective bargaining. No one may be subjected to slavery, servitude and forced labour.

While access to education was racially determined during apartheid, all South Africans now have the right to basic education, including adult basic education, and to further education, which the state has sought to progressively make available and accessible.

All South Africans now have the right to access health care, water and social security and appropriate social assistance if they are unable to support themselves and their dependants. No one may be refused emergency medical treatment.

Every child, regardless of race, has a right to basic nutrition, shelter, basic health services and social services. Every child also has the right to family care or parental care and to be protected from maltreatment, neglect, abuse or degradation and exploitative labour practices.

Compared to the apartheid era, all citizens have the right to freedom of sexual orientation, conscience, religion, thought, belief and opinion.

During apartheid, not only was same-sex marriage unheard of, but homosexuality was illegal. In 2006 South Africa became only the fifth country in the world to pass legislation allowing gay and lesbian people to marry – way ahead of so-called developed democracies such as Norway, Sweden and the UK.

Apartheid’s “immorality” legislation also outlawed sex and marriage between people of different races. Today, all marriages concluded under any tradition, or any system of religious, person or family law, are recognised.

Compared to the further oppression and discrimination women experienced during the apartheid era, they now have equal rights before the law, including the right to make decisions regarding reproduction.

Democratic South Africa is 20 years old, and our Constitution just 18. As a country we struggle with rights that are new to us all. We live and breathe guided by a Constitution that explicitly guarantees us the right to abortion, mandates government-funded healthcare and encourages income redistribution.

It is a Constitution that requires the state to legislate against inequality. Our Constitution is only 18 years old so the state does fall short at times of these lofty goals. But South Africa’s Constitution gives us citizen’s access to the court system to demand action from the government.

Our admirable Constitution would mean nothing unless South Africans lived in its spirit. And South Africans do, we have a robust media unafraid to take on the state. A hardy judiciary that rules on law, rather than popular opinion. South Africa is become a country boldly embracing the spirit and giving life to the Constitution.