The importance of reading and the impact literacy have on society were highlighted at the World Book Celebration in Johannesburg this week.

Melissa Javan
Tebogo Ditshego, founder of the online book club ReadABookSA, said we needed make sure we prioritised the right things. “We say we can’t afford books but on weekends we make a plan to get drunk. How about we replace the beer bottle with a book? What would our future then look like?”

Ditshego was one of the speakers at the fifth annual World Book Celebration, held in Auckland Park in Johannesburg on 30 May 2017. The event was hosted by public relations company Ditshego Media in collaboration with ReadABookSA and OR Tambo International Airport.

It was also the celebration of the first anniversary of Ditshego’s self-published book, Kasi Nerd. Ditshego is also one of Brand South Africa’s Play Your Part ambassadors.
Speakers included South African actors Masasa Mbangeni and Thapelo Mokoena, entrepreneur Lebo Gunguluza, author and playwright Siphiwo Mahala, and Emmanuel Bonoko, the founder of EBonoko Foundation. Bonoko is on the 2016 Forbes 30 Under 30 list.

A thirst for knowledge

Ditshego, founder and chief executive of Ditshego Media, urged South Africans to not only take care of their children, but to make sure their children had a thirst for knowledge. We must make being intelligent look good, he said.
“It’s not about having swag, but rather to have intellectual swag.”
The volume of the thirst for knowledge should be turned up; we should turn up at book clubs instead of dance clubs.

In addition, Ditshego spoke about land, saying people had a spiritual connection with their land; they needed to reconnect with the land. “Connect with yourself first — know your [African] history. If you don’t know where you come from, how will you know where you’re going?

“In every one of us there is a story,” he said, and pointed out that he wrote Kasi Nerd in six weeks. Its messages included that education would set you free and that you could not have a free mind if you did not read.
Audience members at the World Book Celebration each received a copy of Kasi Nerd, signed by the author.

Mbangeni, who plays Thembeka in Scandal, spoke about the books she had read as a child. Through books she found her first friends, she said. “Books taught me that you can choose your own adventure.”
Books also ignited your imagination, an important tool in an actor’s toolbox.

Mokoena said that wealth of knowledge informed every decision he made. He grew up in Ladismith and came to Johannesburg to study chartered accounting. He had no interest in accounting, but lack of knowledge made him want to study the field.

He found out about film and the arts industries when he was studying at the University of Witwatersrand in Braamfontein. “I discovered institutions where I started feeling what I wanted to do. Being surrounded by that energy is what I enjoyed about being in these spaces.
“My interest in the art of storytelling grew and grew.” He dropped out of accounting and started classes at the film school, Afda.

Without reading he could neither act nor create stories, Mokoena said, adding that he was busy reading about and researching for the role of a journalist. “For the past seven years now I’ve become a solid reader. So many truths are found from reading books.”

Mokoena encouraged the audience to tell their stories. “Let’s take the pen, the camera and the scriptwriters back… Unless we tell our stories, we will never be our own heroes.”

“Until we tell our own stories, we will never be the heroes in the stories we read.” @ThapeloMokoena #WorldBookCelebration #KasiNerd pic.twitter.com/yDZC5UXXcD

Bonoko said he had seen many people who had ideas, but who never took action. “The world is inspired by people who get things done,” he said. “Implementation is key… be more of a doer.”
Many things that trended on Twitter did not add value to communities, he said, urging South African youth to spend time on issues that would have an impact on the country.

Bonoko said we should collaborate to be successful as a nation. “Let’s support each other; let’s be there for each other.
“I learned from my mentor: ‘never assume someone is less important based on where they are today, because you don’t know where they’ll be tomorrow.'”

Attendees at the fifth annual World Book Celebration in Johannesburg on 30 May 2017: 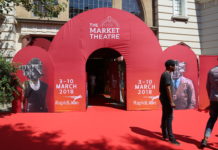 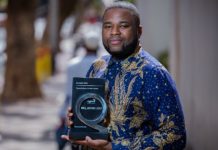 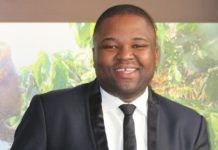 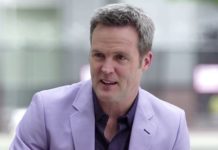