1976 TO 2019: South Africa`s youth is more than ready to honour the sacrifices of their counterparts from 1976

“Sometimes it falls upon a generation to be great. You can be that great generation. Let your greatness blossom,” said South Africa’s late statesman – Nelson Mandela at London’s Trafalgar Square in February 2005.

16 June 2019 marks the 43rd anniversary of the June, 1976 student uprising that began in Soweto and spread countrywide. This profoundly changed the nature of South Africa’s struggle for freedom and democracy. The sacrifices of these courageous young people who fought for equal education will forever be etched in the country’s history.

Today young people continue to grapple with socio-economic challenges which ultimately impact on their ability to access opportunities in the country’s economy.

South African youth are affected by high unemployment. Youth unemployment however, is not unique to South Africa; it is a global phenomenon. According to the International Labour Organization (ILO), there are about 71 million unemployed youth, aged 15–24 globally in 2017, with many of them facing long-term unemployment.

According to Statistics South Africa, currently, unemployment graduate figures in the same age group is at 31% compared to the same period in 2018.

In the face of these figures and knowing that young citizens make up almost two thirds of the entire South African population, it is clear that time is of the essence, and solutions must be found quickly. The development of young people has to become a national priority.

Through various youth development and empowerment initiatives, South Africa has begun to undo the dire conditions that marginalised youth under apartheid. Through the numerous pro-youth policies and intervention programmes such as the Youth Employment Service (YES), youth are afforded the opportunity to become active, and equipped citizens who can participate meaningfully in the country’s economy. These programmes have set targets to ensure the reduction of youth unemployment.

Brand South Africa’s Play Your Part programme is designed to ensure that all citizens contribute to a brighter future for the benefit of the Nation Brand and its people. We owe it to ourselves as a nation.

Contribute to the conversation on 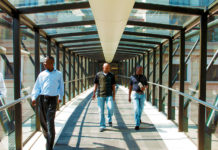