“I see wonderful people in this country who do wonderful things,” said activist and politician Andrew J Young, the former American ambassador to the UN and human rights and anti-apartheid stalwart, at a tribute at the Nelson Mandela Foundation in Joburg.

According to the foundation’s website, the event, held on 29 March, highlighted the support of the American public and the deep sense of kinship felt for South Africans in their fight against apartheid.

See more from American and African leaders as they share their thoughts on Young’s work:

Young reminisced about prominent South Africans, including students and young leaders who returned to the country from the United States to contribute to their homeland.

“On one of his many trips to South Africa, Young visited Robert Sobukwe in Kimberley in the 1960s and offered his support,” reads the website. “While Sobukwe declined the help, Young did host Sobukwe’s children in the US while they studied there.”

Minister in the Presidency Jeff Radebe praised the work Young had done in fighting injustice. “As human beings, we are less appreciative of the giants that walk among us and choose to appreciate them when they have been called to eternal rest,” he said.

“I am honoured today to pay tribute to an icon in his own right, a colossus and a legend who has inspired the global struggle for justice. Wherever [Young] goes, he brings hope and raises the spirit of no surrender against injustice.” 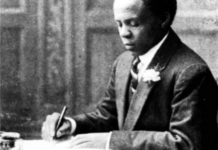