Botswana is going Olympics-mad over its new swimming sensation, Naomi Ruele. The 19-year-old is the first swimmer from Botswana to qualify for the Olympics.

Ruele, who currently swims for Florida International University in the US, qualified for the Rio Games in March this year, setting a personal best of 26.07 seconds in the 50m freestyle qualifier.

During her time in the US, Ruele has won seven gold medals at the most recent C-USA Championships, the country’s top collegiate swimming competition. She set two records and was the top swimmer of the event.

Ruele was recently named the Junior Female Sportsperson of the Year by the Botswana National Sports Council. It noted her remarkable achievements in the pool as well inspiring young Batswana to take an interest in the sport.

She will join the rest of the Botswana Olympic team made up of current African Games 400m champion Isaac Makwala and London Olympics 2012 800m silver medallist Nijel Amos.

For the first time Botswana will have more than one female in their Olympic team. Track athletes Lydia Jele and Christine Botlogetswe will also join Ruele in Rio de Janeiro. Until now, 400m sprinter Amantle Montsho had been the only female Batswana Olympian, competing at the 2004, 2008 and 2012 Games.

Source: This is Africa

Would you like to use this article in your publication or on your website?
See: Using SouthAfrica.info material 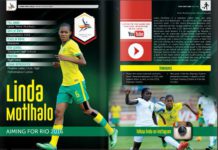