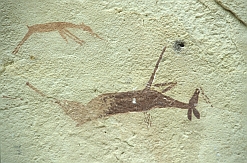 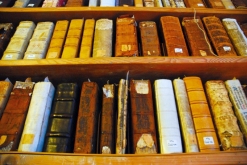 The World Digital Library currently holds
over one thousand historically important
items, many of which are priceless.
(Image: stock.xchng)

An 8 000-year-old South African rock painting of an injured antelope is the oldest item in the archives of the World Digital Library, (WDL) which goes live on 21 April 2009. The library is to be launched at a ceremony at the headquarters of the United Nations Educational, Scientific and Cultural Organisation (Unesco) in Paris, France.

Completely free of charge, and available in seven languages (Arabic, Chinese, English, French, Portuguese, Russian, and Spanish), the WDL presents significant cultural and historical materials from societies around the world.

Its main aim, it says, is to foster international and inter-cultural understanding and awareness, as well as to provide resources to teachers, students and the general public around the world, expand non-English and non-western content on the internet, and contribute to academic research.

In addition, through capacity-building initiatives in partner countries, the WDL hopes to close the digital divide within and between developed and developing countries.

Partnering with Unesco is America’s Library of Congress, which developed the WDL, and the Bibliotheca Alexandrina of Alexandria, Egypt, which provided technical assistance.

So far 26 libraries and cultural institutions in 19 countries have contributed their precious resources and expertise to this important internet project.

Over 1 100 historically important treasures have been digitised for the project. These include manuscripts, maps, rare books, musical scores, recordings, films, prints, photographs, architectural drawings, and other cultural materials.

The idea of an online digital library, which encompasses all the cultures of the world, was first mooted by US Librarian of Congress James H. Billington, who envisioned a resource with the broadest possible access.

Speaking to the US National Commission for Unesco in June 2005, Billington remarked that such a library could “bring people together by celebrating the depth and uniqueness of different cultures in a single global undertaking”.

Development of the former history professor’s remarkable proposal began four years ago with a US$3-million (R27.4-million) donation from Google, Inc., the first to come on board.

Google co-founder and president of technology Sergey Brin said at the time that “Google supports the World Digital Library because we share a common mission of making the world’s information universally accessible and useful. To create a global digital library is a historic opportunity.”

Billington commented recently that the WDL is expected to become a useful tool in stimulating people to ponder the interaction between cultures over the years. “We hope it will increase international understanding and also increase the curiosity of the world we live in about cultural achievements of humanity.”

And, he added, “the beauty of this whole system is that it doesn’t prejudge who it’s for. It’s for everyone.”

The collection can be searched in a number of ways – by time frame, contributing institution, name of collection, geographical region, country, topic, type of media, and more.

To date there are 122 items from Africa, giving interested audiences a fascinating glimpse of the rich history of the continent. These range from a late 18th century Spanish map depicting Port Louis in Mauritius; a treatise on numeric calculation in astronomy from the Timbuktu Manuscript collection; to a late 19th century photograph of Zimbabwe’s spectacular Victoria Falls.

Other international works are Arabic scientific manuscripts from the National Library and Archives of Egypt; the 11th century Tale of Genji, written by Japanese imperial lady-in-waiting Murasaki Shibuku and recognised as one of the world’s oldest novels; and Sweden’s famous 13th century Codex Gigas (Giant Book) or Devil’s Bible, the largest medieval manuscript in the world. It is known as the Devil’s Bible because inside is a full-page illustration of that malevolent entity.

These examples are a fraction of the educational wealth on offer, and it is just the beginning as Billington plans to expand the content as much as possible with the ongoing help of more partners and funding.

He explained that since the site functions independently of politics and economics, and is therefore untouched by the controversy that often accompanies the two topics, he hopes that it will become a “truly international project”.

The country with the most contributions is the US with 118, followed by the Russian Federation with 93.

There are 17 South African items. The University of Pretoria contributed 11 items from its library, featuring six San rock paintings and five photographs of early Pretoria.

The rock paintings are held in Pretoria University’s Woodhouse Rock Art Collection, which features over 23 000 items in various media such as slides and tracings. Rock art researcher Herbert Woodhouse, whose life’s work makes up the collection, received the National Order of Ikhamanga (bronze) in 2006 for his contribution to South Africa’s archaeological and cultural heritage.

The early Pretoria photos come from the university’s Van der Waal Collection, which was put together by architectural historian Dr Gerhard-Mark van der Waal and focuses on architecture in South Africa.

The Library of Congress and the Central Library of the Qatar Foundation have donated six old-time maps and images, including an early 20th century photo of uncut diamonds in Kimberley, a 1770 Spanish map of the Cape of Good Hope, and an 1895 photo of a Zulu chief.