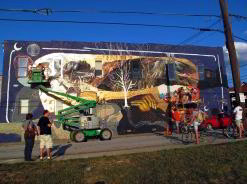 One of Sam’s most recent projects involved
painting colourful murals with positive
messages as part of efforts to rejuvenate
the once thriving Woodstock area. 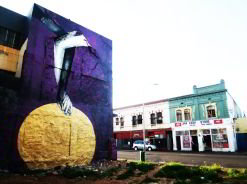 Shop owners are happy to have murals
painted on their buildings. 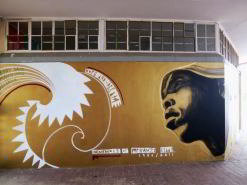 A South African artist is using art to bring about social change and transform the suburb of Woodstock in Cape Town with colourful murals.

Ricky-Lee Gordon, known by his pseudonym Freddy Sam, is best described as a creative activist who initiates projects to inspire people and change lives.

“It is my intention to explore my community and surroundings using public art as a tool to communicate and connect with people from all walks of life. I am more interested in the experience than the result,” he says.

One of his most recent projects, which has attracted international attention, involved painting colourful murals with positive messages as part of efforts to rejuvenate the once thriving Woodstock area.

Woodstock, which is one of Cape Town’s oldest suburbs, was always known for its thriving textile and clothing community. “Many families moved here to get work in these factories, but now they are unfortunately closing down,” Gordon says.

As more factories closed their doors, people were left without work and the area started to decline.

New lease of life for Woodstock

Woodstock may not be Cape Town’s most upmarket suburb, but Gordon says that the area is fast gaining a reputation as an up-and-coming art precinct.

Contributing to the urban gentrification of Woodstock is an important aspect of Gordon’s work as an artist. “I want to be part of it and I want to influence it for the better with art,” he says.

The area has a lot going for it – it has character and its authentic and vibrant culture has become a major draw card. This, coupled with affordable rental space, has encouraged many artists, galleries and agencies to move into the area.

“Artists like to be surrounded by real culture and there is a lot here. It makes for interesting life on the street,” he says.

Mural art with a purpose

For Gordon, Woodstock is the ideal canvas. The architecture is neglected and colourful murals are a good way to transform the rundown landscape.

“With the grittiness of Woodstock many building and shop owners are happy for murals to be painted on their buildings. The colour is rejuvenating the area,” he says.

Before painting a mural, he always approaches the building owner to ask for permission. He explains that community engagement is one of the main goals he hopes to achieve.

His murals are created using mixed media such as household paint and spray paint. “My work is a mixture between portraiture and abstraction. Abstraction is a mixture of colour, line and shape to give emotion. I want people to smile and feel good about the work,” he says.

The response to his murals has been overwhelming. “People love it. It is nice to create something like this and it gives me joy to give someone else joy and this defines my style,” he says.

Gordon has also found another outlet for his creative activism by getting involved in the Percy Bartley Orphanage, a home for boys aged eight to 18 years.

“The home is a safe space for the boys, but when I found out about it I approached a sponsor to provide funding to rejuvenate the home with murals and colours,” he says.

Since livening up the home with murals, the project has evolved and he now hosts art workshops at the home. Gordon says the youngsters will soon be opening their own art exhibition.

Five years ago he founded the Write On Africa initiative, a community art and inspiration project that creates murals and presents workshops in poor communities to uplift and inspire social change.

Gordon also runs a residency and project space called Word of Art and invites creative people from all over the world to come and live in Woodstock and get involved in the community.

His next ambition is start a creative art initiative in schools, focusing on those with very low to zero pass rates.

He wants to approach the most needy schools and work in them for a year, running weekly workshops in creative art. “It will be a colourful expressive activity. It won’t be intimidating and children won’t be marked on it,” he explains.

Through art, he hopes to inspire children and teachers to believe in themselves and take pride in their school. “It only takes one day of inspiration to change someone’s life,” he says.

Gordon believes that creativity can be a solution to many challenges in South Africa’s schools and artists can be at the forefront of such change.

“Artists can make a major contribution to societal change. It took me many years to appreciate art because it wasn’t considered cool, but these days artists are like the new rock stars,” he says.