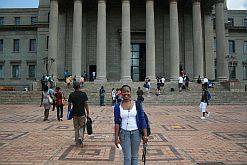 An artist’s impression of the interior of
the Wits Art Museum once completed.
(Image: City of Johannesburg)

The Wits Art Museum will receive funding from Bank of America Merrill Lynch to restore some of its treasured items, which, the academic institution says, are of national importance.

Wits University announced on 18 November 2010 that the funds will be channelled towards conserving 25 beaded Ndebele aprons kept in its museum. In isiNdebele, the items are known as iiphephetu and date back to a period between 1920 and 1970.

The value of the sponsorship has not yet been announced.

The university said all the iiphephetu need “stabilisation, consolidation, cleaning and repair”, and a specialist conservator will be appointed to carry out the work.

Iiphephetu were traditionally designed and made by Ndebele mothers or grandmothers when their daughters entered puberty. At this time the family performs an initiation ritual known as ukuthomba for the teenager, which signifies growth.

The aprons are made from canvas and glass beads, with some also incorporating bits of wool and leather. “Each of the iiphephetu is unique, and displays significant invention and creativity within the parameters of this important cultural tradition,” said the university in a statement.

The Wits Art Museum, currently undergoing a revamp, is one of 10 international projects that will benefit from the bank’s inaugural art conservation programme. The programme is meant to help restore artworks of cultural and historical value in Africa, Europe and the Middle East.

It’s also designed to raise awareness about conserving such artworks so that they are “preserved, displayed and enjoyed by future generations”.

The bank is known for providing much-needed funds for museums, including sponsorships and loans.

Wits is delighted to be part of this programme, said its Deputy Vice-Chancellor of Research Prof Belinda Bozzoli.

“By enabling this important conservation work to be undertaken, Bank of America Merrill Lynch is supporting the Wits Art Museum’s vision to contribute to a common sense of nationhood through art, by facilitating the preservation of diverse critical heritage material for the benefit of all,” she said.

Exciting exhibitions in the pipeline

The R68-million (US$9.8-million) restoration of the Wits Art Museum will be completed by the end of 2011. Bozzoli said the restored iiphephetu will be part of the range displayed for the public when the museum reopens.

Previously known as Wits Art Galleries, the Wits Art Museum will officially reopen with a series of exhibitions targeting the university’s students and academic staff, as well as the general South African public and tourists.

“Funding from Bank of America Merrill Lynch Art Conservation Programme will ensure that these vital artistic treasures can be conserved to the highest standards and enjoyed by the public for many more years to come,” said the bank’s Humphrey Borkum.

“We are privileged to support the Wits Art Museum in restoring some of its most important artworks,” he added.

While new technologies are used to make art conservation safer and more effective, this is costly to museums – and the American bank is aware of that, said its executive Rena De Sisto in a statement. “This is a propitious time to actively engage in preserving these treasures.”

Sisto added that by helping to restore cultural art of different nations, they hope to “elevate awareness of cultural traditions around the world and inspire respect and interest across cultural boundaries”.