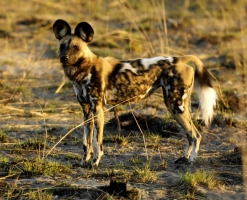 Painted wolves are by far the most endangered large mammal in South Africa – there are less than 400 wild dogs remaining in the wild in South Africa. 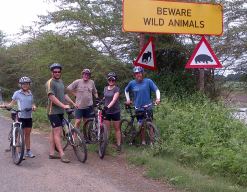 The next planned ride for Pedals 4 Paws will begin in the last week of June this year. Cyclists will ride a distance of 1 000km from Gonarezhou National Park to Mana Pools National Park in Zimbabwe.
(Images: Painted Wolf Wines)

African wild dogs, which are also referred to as painted wolves, are by far the most endangered large mammal in South Africa – there are less than 400 wild dogs remaining in the wild in South Africa, and an estimated 4 500 to 6 000 remaining in isolated pockets in sub-Saharan Africa.

With this in mind, Painted Wolf Wines, founded in 2007 by husband and wife team Jeremy and Emma Borg, donates funds from every bottle sold towards research into and conservation of this intriguing, beautiful but highly endangered species.

Inspiration from the painted wolf

The Borgs founded Painted Wolf Wines with the goal of creating a company and wine brand with a different approach, namely advocacy of conservation. They support conservation projects throughout Southern Africa through wine sales and creating opportunities for advocacy.

“Painted Wolf allows us to fuse our passion for and experience in wine and photography with our love of the bush, wildlife and conservation,” says Emma. “We have an intense love of the bush, having spent a number of years living and working in it, hence the connection with the African wild dog.

“When it was time for us to create our own company, it was imperative that we developed a project which would allow us to give something back to the bush … In order to finance and develop capacity for Painted Wolf Wines we created our ‘pack’ [company] which looks to the dogs for inspiration – their teamwork, social structure, dynamism and persistence.”

Painted Wolf Wines’ social media discussions are a blend of wine interest and conservation, where the goal is to use distribution and wine sales to increase public awareness of wild dogs and the critical conservation issues for this species and other endangered South African wild life. In 2012, Painted Wolf Wines donated over R100 000 to wild dog conservation.

The company is associated with some of the most respected conservation organisations operating in Southern Africa, including the Endangered Wildlife Trust, the TUSK Trust, the Painted Dog Trust in Zimbabwe, and the eminent American biologist Dr John “Tico” McNutt at the Botswana Predator Conservation Trust. “We also plan a guide to the public about where wild dogs can be seen in the wild, who are the best safari operators,” she adds.

The Borgs also plan to develop links with conservation projects in the other countries where their wine is sold. “In the UK, we donate 5% of our return from all UK sales to TUSK, which donates to conservation and community projects throughout Africa,” explains Jeremy. “Our conservation work is on-going and as our business grows so the amount of money we will donate and the impact which we have will increase.”

In early 2012, the Borgs began a new initiative called Pedals 4 Paws. It’s a cycling campaign supported by Painted Wolf Wines that gives the company additional tools to fulfill its conservation objectives. It entails cycling 5 000km to 6 000km over a 24-month period to raise money for and awareness of wild dogs.

“Our aim is to ride to all of the major conservancies where wild dogs are to be found in Southern Africa,” says Jeremy.

The next planned ride will begin in the last week of June this year. Cyclists will ride a distance of 1 000km from Gonarezhou National Park to Mana Pools National Park in Zimbabwe. Both parks have a high population of wild dogs, and the money raised will be split between the Lowveld Wild Dog Project in Gonarezhou Park and Painted Dog Conservation in Mana Pools Park.

African wild dogs are different from most predatory mammals in that they are the ubuntu species – the one that thrives on family relationships, mutually beneficial co-operation and teamwork. Most predators in Africa have an aggressive “eat or be eaten” outlook that often leads to the decimation of a community through same species competition.

The wild dog is co-operative in almost every aspect of its behaviour; when the pack is under threat, the common vision and goal becomes most noticeable. Although the species survival is threatened, it keeps beating the odds by standing together. Sadly this behaviour, and the animals’ generally small size of 25kg on average, contributes to its endangered status.