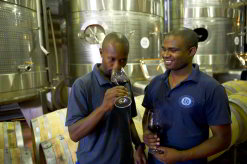 Two cellar workers, from the Graham Beck
estate in Franschoek, who participated in
the programme. Graham Beck and the
estate’s cellar master Pieter Ferreira are
South African partners in the initiative. 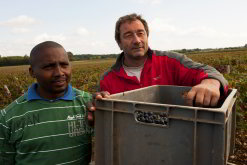 The art of making and enjoying wine has always brought people closer together. Now this rich form of exchange – and the benefits thereof – is being felt on a national level with the Thutukile Skweyiya Western Cape programme, which celebrates a decade of achievement in July 2011.

The programme, which entails previously disadvantaged South Africans visiting France to learn the fine skills of wine-making, was established in 2001 and has so far changed the lives of more than 250 workers, some in profound ways.

It is the brainchild of South Africa’s then ambassador to France and Unesco Thutukile Skweyiya, whose primary mandate was to strengthen relations between France and South Africa to enhance the lives of her compatriots.

“In 1999 I identified the wine sector as one area, among others, where we could give practical impetus of our objective to better the lives of our people at home.”

In September 2002 the relationship was formalised when then-premier of Western Cape Gerald Morkel and the president of the regional council of Burgundy signed an agreement stipulating the areas of cooperation.

The decade of empowering people will also be celebrated with the launch in the Western Cape in July, and later in Burgundy, of a book.

Every year a panel of representatives from Elsenburg college, the Department of Agriculture in the Western Cape and industry bodies in the province selects between five and eight workers for the different courses – sommelier training, project management, wine-making, barrel management and maintenance, and cheese-making.

These workers then receive training and skills exchange at the CFPPA in Beaune over several weeks, depending on the course.

As part of the programme, and perhaps the most exciting, is the time workers spend with French host families on small family-owned wine estates across Burgundy. It is during this time that they really experience French living, with its culture so strongly grounded in food and wine.

In 2006 the programme introduced a reciprocal component with 10 French students from the CFPPA coming to work and learn on wine farms in the Western Cape each year.

And, every alternate year, a rugby team from Elsenburg visits the CFPPA and vice versa.

But, says Marius Paulse, chief director of structural agricultural training at the Elsenburg college, the focus of the project remains on capacity-building of workers in the wine industry, especially for the unskilled orchard or cellar worker.

It’s the stories of change taking place in the lives of beneficiaries and their hosts which really lies at the heart of the exchange programme’s success, says CFPPA project manager Florence Zito.

Paulse agrees, adding that he has seen remarkable change taking place among participants. Workers return from France with a completely new perspective on viticulture and oenology, but more importantly, often with a profoundly different view on life and their own personal abilities and ambitions.

Moira van der Merwe is one such a success story. She started out as an ordinary cleaner and labourer in the Cape vineyards and was selected to participate in the programme.

Van der Merwe visited Burgundy twice, first completing a technical course of five weeks at the CFPPA and then spending a further three weeks with a host family during the wine-making period.

After this training, she was promoted from the vineyard to the tasting room, resulting in her attending a second full-time sommelier course to help her specialise in her new job.

Today she is an assistant in the wine-tasting room at Bilton Wine Estate in the Stellenbosch wine region.

Another example is Felicity Sheloba: with very little formal schooling, Sheloba progressed from tea-maker and cleaner to assistant wine-maker at the Company of Wine People, also based in Stellenbosch, after receiving training in France.

Zito admits that her own life has been changed as a result of the project, and that many of the French host families feel the same, despite an initial reluctance on their part to be involved with the project.

But this same group of people has continued to receive South African workers year after year because they have found that the programme has added so much value to their own lives.

“Something changed inside them,” Zito says.

She adds: “Above all this programme is a human exchange. Everybody grows, everybody has become richer as a result of this programme, not just the beneficiaries.”

Former South African rugby legend and now renowned wine-maker Jan Boland Coetzee, owner of Vriesenhof Vineyards in Stellenbosch, says two of his workers attended a course in Burgundy and he noticed a remarkable change on their return.

In essence, the programme is about more than just an exchange of skills in viticulture and oenology, Zito feels.

“It is an exchange of life. It is a profoundly human story that has touched the lives of everybody who has had dealings with it.”

Zito is proud of the Burgundy region and its wonderful “living” culture of wine and food. She laughingly admits that she finds it horrifying that South Africa refers to viticulture and oenology as the wine industry.

“We have some people who came to do the courses who have never tasted wine, even if they work in the cellars or the vineyards for a very long time. They didn’t know anything about the fine art of wine, they thought about wine just as alcohol,” she says.

For the French, wine is not an industry and in Burgundy, wine is not alcohol, she stresses. With a history of wine-making stretching back 2 000 years, Burgundy wines are a living story of culture and family heritage grounded in everyday life.

“Wine in Burgundy is culture, it is heritage, it is style of life, it is gastronomy, it is the link between people, it is love, yes it is pleasure, friendship: this is wine.”

And it is this essence that the South African workers discover when they visit France.

Although the cost of the programme poses many challenges for the budget of the Western Cape Agricultural Department, positive change in people’s lives is one of the determining factors which has convinced the provincial government to continue with the programme, Paulse says.

“We are therefore committed to continue and see the programme grow.”

The same sentiment is expressed by the French counterparts. The success of the project so far has convinced the politicians that the programme should continue, says Zito.

She foresees, however, that the programme will need to adapt to the changing needs and challenges of the target beneficiaries, but that no matter the form it takes in future, the exchange of skills and the story of wine will continue between South Africa and Burgundy.

“The society in South Africa has changed a lot, so has the demand, therefore this programme will be adapted. The need is not the same. The questions are not the same. So we must adapt the partnership to the needs of the society,” Zito adds.

Inspired by the success of the South African exchange programme, Burgundy and the region of Maule in Chile initiated a similar programme in 2010.

The human story behind the project

In July 2011 South Africa and France will celebrate its 10 years of working together to empower unskilled workers in the Western Cape wine industry with the publication of a book.

The book will first be launched in the Western Cape “as a testimony to what we, as humans, can do when we all work together for the common good,” Zito says.

“With this book and with the pictures we hope that it will also tell the human story behind the project because it is such a noble story.”

The initial launch takes place from 18 to 22 July, before the book’s unveiling later in the year in Burgundy. It will be published in English and French.