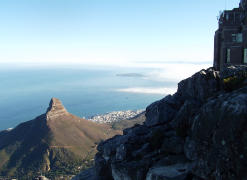 A view of the Atlantic Ocean, Lion’s Head and Robben Island from the top of Table Mountain. 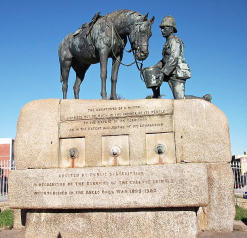 The Horse Memorial in Port Elizabeth was “erected by public subscription in recognition of the services of the gallant animals which perished in the Anglo Boer War 1899-1902”.
(Images: Wiki Loves Monuments South Africa)

The Wiki Loves Monuments (WLM) project is a global initiative, a public photo competition that focuses on national cultural and heritage monuments. The project started in the Netherlands in 2010 and was initially confined to that country, yielding 12 500 entries in the end.

In 2011 it spread across Europe, resulting in 165 000 photographs uploaded from 18 European countries.

In 2012 the competition is going global. South Africa is one of three African countries, and 35 in total, whose Wikimedia chapters are organising national participation. Others include Kenya, Ghana, Israel, Mexico, Brazil, Russia, and India.

Uploaded photos will become available for use on Wikimedia and its associated sites, under its creative commons licence – only images released under this licence are eligible for entry. The goal of the exercise is to celebrate the world’s precious living heritage and make it available to everyone.

Anyone can take part – it’s not necessary to be a professional photographer. All you have to do is take your photo of one of 3 611 South African Heritage Resource Agency-registered (SAHRA) sites, or a relevant new one, and upload it. However, you must register with Wikimedia Commons first.

Uploading is a simple process and can be done in two ways – instantly, by using the mobile/tablet app for Android, or with the upload wizard on a computer.

Everything you need to know, including competition rules, lists of SAHRA sites by province, and useful photography hints and tips, is on the South African WLM page.

At the end of September a distinguished panel of South African photographers – including Graeme Williams and Gavin Furlonger – will assess the entries. The winners will be announced in November and will receive prizes such as vouchers from a leading camera retailer, and magazine subscriptions.

The country’s best photo will go forward to compete with entries from other nations in the international leg of the competition.

South Africa’s WLM project kicked off at the beginning of September at the historic Slave Lodge in central Cape Town, to coincide with national Heritage Month as well as the launch of the local Wikimedia chapter.

Those interested in the project can follow its progress via the Facebook page or Twitter stream. There are over 400 images uploaded already, and the subjects come from all over South Africa, from Table Mountain to Pretoria and beyond.

They range from battlefield shots and gravestones, to lighthouses, heritage houses, post offices, churches and monuments. Anything that has a cultural or heritage value, for instance struggle sites, graves or archaeological sites, is eligible.

Events planned around the event include upload marathons at museums on Heritage Day, 24 September, and scavenger hunts where participants will visit heritage sites on a predetermined route and afterwards gather to give feedback.

The project is also accepting public nominations for new heritage sites, which will later be considered by the various heritage organisations, including WLM collaborators SAHRA, Heritage Western Cape, Art South Africa and the National Heritage Council.