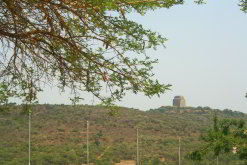 Seen here from Freedom Park on the
neighbouring Salvokop Hill, the Voortrekker
Monument is to be officially incorporated
into South Africa’s wealth of heritage sites.
(Image: Janine Erasmus) 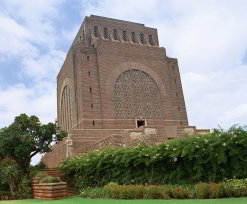 The Voortrekker Monument depicts the
pioneering spirit of farmers who journeyed
into South Africa’s interior in search
of independence.
(Image: Gauteng Film Commission)

The cenotaph beneath the Hall of Heroes
is lit by the sun’s rays every year on
16 December.
(Image: Flickr)

The Voortrekker Monument, cultural bastion of the Afrikaner people, is to be declared a Grade 1 national heritage site by the South African government in March.

Grade 1 status signifies that the building is of national significance.

Making the announcement, home affairs minister Nkosazana Dlamini-Zuma described the decision as a gesture by government to “further evoke a spirit of nation-building and reconciliation”.

The 42m-high monument is one of a number of sites that will be granted national heritage status in 2012, with the government planning to construct and unveil monuments and memorials to celebrate those who led the liberation struggle against apartheid.

The home of the late African National Congress president Oliver Tambo in the Eastern Cape’s Nkantolo community, Winnie Madikizela-Mandela’s house in Brandfort in the Free State, and numerous struggle hero graves will be restored and declared heritage sites.

A R20-million (US$2.6-million) museum planned for the OR Tambo site will include the OR Tambo Garden of Remembrance, which was created there five years ago.

The award of national heritage status is the highest form of cultural recognition in South Africa and brings with it considerable benefits, says the CEO of the monument, Sonja Lombard.

The recognition will give the Voortrekker Monument greater protection and allow for the possibility of acquiring additional state funding from the Department of Arts and Culture.

“We are elated, as this is the first Afrikaner monument since 1994 to receive such status,” said Lombard. “The recognition carries considerable weight as it means the monument is now a protected national area.”

In addition, photographs or images of the site may no longer be used without permission of the owners or the organisation that manages the site.

The monument first applied for heritage status in 2006 and the South African Heritage Resources Agency (Sahra) announced the approval in the Government Gazette of July 2011.

Sahra is a statutory body responsible for the identification, conservation, protection and promotion of heritage for all South Africans now and in the future.

Heritage, referred to as the national estate, encompasses both physical sites and physical artefacts, and can include anything from graves and burial grounds to palaeontological sites, and from ethnographic and decorative art to sound recordings.

According to the Sahra website, “a place or object is considered part of the national estate if it has cultural significance because of its importance in the community, or pattern of South Africa’s history, its possession of rare aspects of South Africa’s natural or cultural heritage, or its strong or special association with a particular cultural group for social, cultural or spiritual reasons”.

Sites are evaluated according to their aesthetic, architectural, historical, linguistic, scientific, social, religious and technological value. Sahra works with the public to identify places which meet these criteria.

Provincial heritage sites are those considered to be significant in the context of a specific province.

The Voortrekker Monument holds a special place in many Afrikaner hearts.

It commemorates the pioneering spirit and history of the Afrikaans-speaking Voortrekkers – they were a small group of farmers, mainly of Dutch, French and German descent, who left the British-controlled Cape Colony in search of independence.

Plans for a monument were first mooted in 1888 by Paul Kruger, then president of the Boer republics of the Transvaal and the Orange Free State, but the idea only really took shape in 1931 and it was another six years before the first sod was turned.

The monument, inaugurated in 1949, is replete with the symbolism of the Great Trek, as the exodus became known. This movement lasted from the mid-1830s until about 1852, and in terms of populating and developing the interior of the country, has been compared to the opening up of America’s wild west.

The imposing granite structure, with its unusual cubic design by renowned architect Gerard Moerdijk, sits atop Monument Hill and is clearly visible from most of the main highways approaching Pretoria in Gauteng.

According to the monument’s website it is the most visited heritage site of its kind in the province and one of the top ten cultural historical visitor attractions in the country.

The monument is filled with fascinating glimpses into South Africa’s past – one of its features is a red granite cenotaph, which every year at midday on 16 December is lit by a ray of light coming through an opening in the ceiling.

Known as the Day of Reconciliation in the modern South Africa, this day also commemorates the Battle of Blood River, which took place in 1838 in KwaZulu-Natal and saw a few hundred Voortrekkers successfully fighting off up to 15 000 Zulu warriors.

A lesser known fact is that the museum is surrounded by a 341ha nature reserve where visitors can see most of the common South African antelope species such as impala and springbok, as well as zebra and smaller mammals.

The monument remains independent and will continue to be run as a non-profit organisation.

Four of these are cultural – Robben Island, Mapungubwe, the Richtersveld and the Cradle of Humankind; three sites are natural – the Cape Floral Region, the iSimangaliso Wetland Park (formerly The Greater St Lucia Wetlands Park) and the Vredefort Dome; while the uKhahlamba Drakensberg Park is recognised as a mixed natural-cultural site.

The country has 13 sites on Unesco’s tentative list – they include the Prince Edward Islands in the Southern Ocean; the Kimberley mines; the Cape Arc of Meridian, of astrological and geographical significance; and the proposed national Liberation Heritage Route.