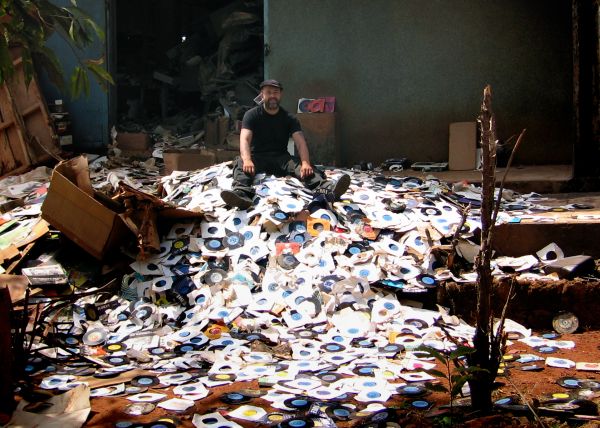 “I will not be mad when the supply of records runs dry and I’ll have to find different things to do. I’m only mad when someone else finds something before me.” (Image: Frank Gossner)

Frank Gossner could see for miles. The sky was clear, the road in northern Benin stretched out straight as an arrow and the blacktop was fresh and smooth. The German DJ and his friend Landry were, to quote Elwood Blues, on a mission from God.

Travelling through central Africa, Gossner was on the hunt for rare African blues, disco, Afrobeat and funk records from the sixties and seventies: vinyl that had been dumped in mouldy warehouses to rot, grooves to make a continent dance that had been forgotten by the fans, and in some cases even the musicians who created them.

The journey along the new highway came to an abrupt and scary halt as a front tyre blew. The car swerved into oncoming traffic with a truck bearing down on them. But somehow Landry brought the car under control and eased it to a stop at the side of the road. The disintegrated tyre replaced and the fender reattached with wire, the clapped out Citroën crawled to Parakou. The first stop was a mechanic, and then Landry and Gossner visited the local Voudon priest. Voudon is the original animist religion of coastal Benin, Togo and parts of Ghana and Nigeria. Assured their trip was not cursed, but urging the pair to sacrifice a cow for the poor, he blessed their journey.

Gossner grew up listening to his father’s classic rock collection before he discovered punk, which grew into an interest in American funk. His love of African funk and blues was born when he stumbled across a recording by Ghanaian Pax Nicholas in a crate of old vinyl from the Nigerian Tabansi record label in a Philadelphia record store in 2000.

“Blues, funk even disco is African music brought back to Africa in the form of American funk, jazz and soul records. The music I collect and play in clubs is not rehashed American music, it is the triumphant homecoming of a music to its roots. West African musicians embraced this music, re-infused it with their own specific local African styles,” he says.

“I don’t want to talk in stereotypes but to me the hardship experienced in everyday life in Africa often translates into a musicians’ ability to create music that feels just a little more vibrant and powerful than music recorded anywhere else. When I spoke to African musicians it was either that they came out of a long lineage of musicians with their entire family’s history and expectations firmly resting on their shoulders, or they came out of a family of non-musicians which made things even harder. In order to earn money with their musical abilities they had to work harder and push themselves even further.”

Gossner’s hardships, blown tyres, bumpy bus rides, armed militia curious about his presence, and insects crawling over him in warehouses where temperatures reached into the fifties are all documented in his blog, Voodoo Funk. It is also where you can find the hour-long mixes that he puts together from his latest discoveries.

The often astonishing journey takes the listener into eccentric corners of music that once had the villages, cities and countries of Africa dancing. A recent mix – Life is a Game – includes Oya ka Jojo by the Beninese band Les Volcans. There is almost nothing to it. A simple snare drum builds into a heavy Afrobeat rhythm, a yelp and the music shifts into a volcanic Afro-Latin beat driven by trumpets. It’s a song that has to be listened to from beginning to end. For Gossner, the DJ, it is important that his audience hears a song from beginning to end, especially if it music they have never heard or danced to before. He believes that the rare and original African jams he plays creates a special vibe. He does not mix or match beats; all he does is play the music.

“I have played West African records in clubs in North America, Europe, Thailand and Vietnam and the response is always without fail overwhelming. West African funk and Afrobeat records prove to be even more infectious on any dance floor than American records from the same period,” he adds.

“I’m well aware that all that I am doing is simply playing other people’s music. I don’t add anything to it, but I do the best that I can to present it in the most joyous way possible to as many people as I can,” Gossner explains. It is his way of challenging as false claims that have been made that he is guilty of cultural imperialism. “Playing these records in clubs is my way of sharing my own personal enjoyment of this music. To see other people dance is the ultimate satisfaction for me.”

A Coke with Mr Mafa

Gossner lived in Conakry, Guinea, between 2005 and 2008, collecting, cataloguing and re-issuing African music. It was also the city where he found his first, and favourite, African record store. Mr Mafa’s shop was not really a shop; it was shipping container dumped on the banks of the Marché Niger that housed his record collection. You couldn’t buy records, but he would compile mixed tapes for his clients. “We would sit on his little wooden bench, drinking Coke and chatting about West African music. Bands like Poly Rythmo from Benin were real superstars in the seventies, touring from Senegal to Cameroon. Sadly it’s not there anymore; the city condemned it and Mr Mafa never got to re-open his store.”

Buying music in parts of Africa can become an education in regional styles and taste. The dwindling number of record shops, like Mr Mafa’s, are usually just someone’s record collection. Gossner’s search has found him rummaging in basements in Sierra Leone, warehouses in Ghana, and record cabinets in Guinea. But no matter where it is, that moment before he opens the door or sits down in someone’s living room is the most intense feeling Gossner can imagine: “It’s a moment where just about anything is possible. You might only be seconds away from finding a record that you and perhaps nobody else from outside of the country or city has ever heard.” 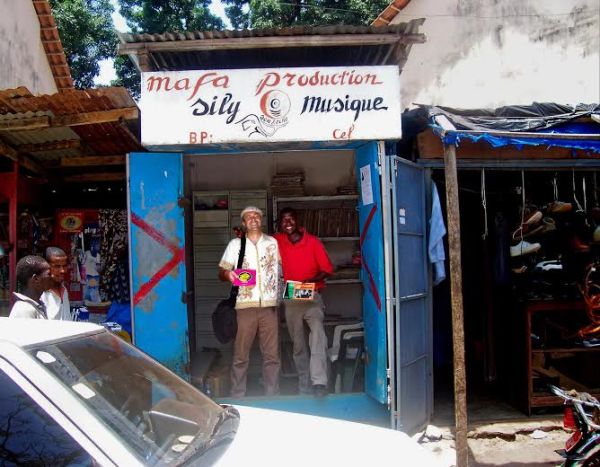 “It actually pretty much happened overnight in Africa that LPs got replaced by music cassettes.” (Image: Frank Gossner)

The DJ is an atheist but he believes that fate has led him to some of his most interesting finds. Orlando Julius, one of the biggest names in Nigerian music, has been creating Afrofunk since the sixties and in his 50-odd years has recorded for local and international labels. In the 1970s he recorded an album for Phillips just as the company was leaving Africa. “They did a lousy job of distributing that record, but it is Orlando’s finest recording from the 1970s. If fate had not directed me to a certain place at a certain time, it might have remained forgotten forever.”

As he does for some of his favourites, Gossner wanted to re-issue the Julius recording. He contacted the musician and found that he could not even remember recording it. He has also re-issued music by Ghanaian band Psychedelic Aliens as well as the record that began his African quest. “I found Pax Nicholas in Berlin. Talking to him about African music was amazing. He told me about Fela Kuti and being there when Nigerian soldiers stormed Fela’s compound in retaliation for him saying soldiers were like zombies,” he recalls.

“One of my favourite projects was re-releasing the Psychedelic Aliens disc. The band had recorded just eight tracks in their entire career and they are among the rarest Ghanaian records. I also got to re-release the Freedom Family album with the help of band leader Albert Jones, who had the most vivid memory of any musician from this era I have ever met.”

Beyond the warmth of the sound produced by vinyl, the cover art is just as important to record buyers. African labels, no matter their size, went to as much trouble as their Western counterparts in creating memorable sleeves. “There was a strong post-colonial sense of cultural identity in the music and the art work. The sleeves were influenced by the bold shapes and bright colours of Africa and are incredibly powerful and edgy. Then in many cases the covers were printed by hand in the silk screening process which often added a whole special aesthetic. I’ve been planning on doing a coffee table book on West African record cover art for many years but since I’m still adding to my collection to this very day, I will probably wait a little longer to be able to include as many covers as possible.”

Gossner lives in Costa Rica these days, but still travels the world introducing his African discoveries to appreciative and growing audiences. His collection is often refreshed by contacts he made while in Africa, who dig through crates and warehouses for a diminishing trove of African classics. 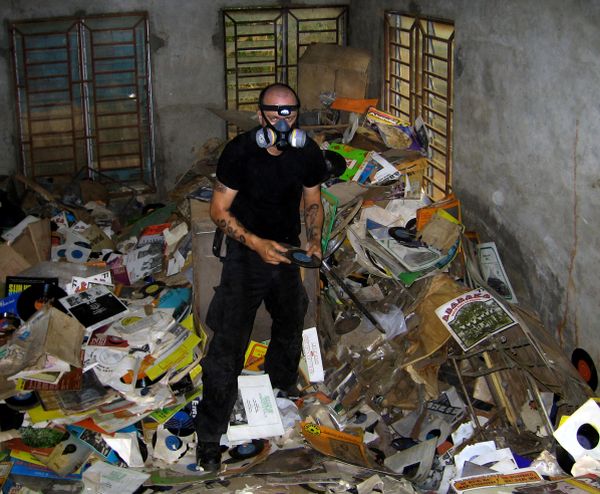 “You can’t even begin to salvage everything. What I have is only just a small piece of a big, lost puzzle.” (Image: Frank Gossner)

Traditional Manding music from Guinea and Mali, especially the musicians who paired their traditional instruments with electric guitars and tube amplifiers; and blues of Nigeria, especially the music of St Augustine and Mochico Bay, is music he collects to listen to at home. He says that he can hear the influence African music still has on popular formats around the world. Everything from the blues and jazz to hip hop and salsa have been influenced by African rhythms.

“In a way you could say that African music is being celebrated all over the world, every hour of every day. It’s sad though that many Africans are so unaware of the continent’s contribution to the cultural evolution of mankind.” But it is not just the music that has him coming back at least once a year on record finding expeditions. The sights and sounds and people of Africa are also a large part of the attraction. And there is the chance of finding a record that no-one has heard outside the village he is in, of course.

“It was early in the morning, a friend had taken me to N’Zerekore [the forest region of Guinea] and we were going to the last row of houses before the forest began. Children were bringing out stacks and stacks of records. It was misty and I could hear all these birds and forest creatures. It was one of those moments of perfection that you get to enjoy once in a lifetime.” 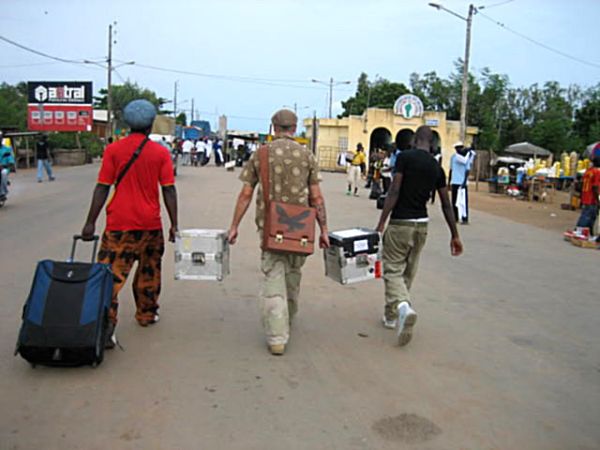 “You still find stuff that was unknown. It is weird to see such a vibrant scene completely cease to exist.” (Image: Frank Gossner)

Power on the airwaves