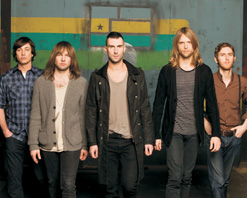 The V Festival, which has been running since 1996 and takes place every third weekend in August during the UK’s summer, began spreading out in 2006 – first in Canada and then the USA. In March 2007, Virgin Festival was launched in Australia and this December is South Africa’s turn. The outdoor festival will take place at the Botanical Gardens in Emmarentia, Johannesburg on Saturday 13 December and on 16 December at the Cape Town Ostrich Ranch.

Known worldwide as the Virgin Festival, or simply the V Festival, the event is one of the crown jewels of the Virgin Group. It is one of the largest and most popular outdoor music festivals in the UK and the live music industry has voted it the European Festival of the Year for seven consecutive years.

South Africa’s premier concert promoter, BIG Concerts says it’s expecting the festival to draw an audience of 60 000 across both cities. So far, more than 180 000 people have attended the V Festivals that have taken place around the world this year.

The line-up for the festival includes world-class international artists who are supported by an extensive and eclectic mix of rising talent. The Verve, Kings of Leon, Stereophonics, Amy Winehouse, Lenny Kravitz, The Kooks and Alanis Morissette are just a few of the big names that played on the UK stages in August this year.

Among the artists billed for the South African leg of the festival is rap superstar Snoop Dogg. He will be joined by US rockers Maroon 5 and One Republic as well as South Africa’s popular The Parlotones. Iconic reggae star, Eddy Grant, is also on the bill.

In a statement, Sir Richard Branson founder of the Virgin Group, said the launch of Virgin Festival was an extension of his strategy of bringing Virgin Group products to “a country I love”. The Virgin Group’s presence in SA includes Virgin Active, Virgin Atlantic, Virgin Mobile and Virgin Money.

“In the last 12 years we have launched eight successful businesses in SA,” he said. “We have over one million customers and 4 500 staff, and it just makes sense to launch Virgin festival here. Live music is growing – it’s a great way to connect with youth and it is something to be positive about. Virgin’s staff loves the event, so they’ve been begging me to do it for years.  In the rest of the world, Virgin staff refer to Virgin Festival as the best weekend of the year and it won’t be long before we can extend the Festival to a weekend here in SA.”

Branson added that the festival will have a strong green link, such as onsite recycling and tree planting carbon emissions.

Virgin’s association with music goes back to the 1970s when Virgin Records was launched. The first artist signed to the record label was Mike Oldfield, who had a very successful run with his debut album. The controversial Sex Pistols were the next band to be signed. During the 1980s, Virgin Records signed Human League, Culture Club, Genesis, Phil Collins, Peter Gabriel, the Rolling Stones, Janet Jackson and other big artists.

It opened its first record store in Oxford Street, London and became the first retailer to introduce listening posts. Virgin Records was eventually sold to Thorn EMI in 1992 for $1-billion.

Do you have any comments or queries about this article? Email Tamara O’Reilly at tamarao@mediaclubsouthafrica.com.