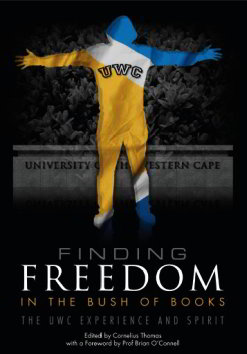 The book explores the colourful history
of the University of the Western Cape
through the eyes of students.
(Image: Wendy’s Book Lounge)

The university celebrated its 50th year
of existence in 2010.
(Image: University of the Western Cape)

The University of the Western Cape (UWC) is taking its place in the greater South African story, with the recent publication of a students’ history of the institute that combines fact with literary narrative.

Finding Freedom in the Bush of Books: the UWC Experience and Spirit collects 31 stories from 24 writers who attended or were linked to the university. The book is published through East London-based Wendy’s Book Lounge, owned by Cornelius Thomas, the book’s editor and a contributor.

His purpose was to capture the history of UWC – as a pioneering, cutting-edge political institute – through the voices of ordinary students.

“Because UWC drew a diverse student population from around South Africa, I wanted to capture the experience and spirit through a multiplicity of voices,” said Thomas. “I wanted the book to tell the story of the ordinary student life and its struggles.”

The stories range from hilarious to tragic, interspersed with more serious accounts of student politics, all of which provide a full spectrum of student life in “Bush College”. The UWC obtained this nickname because it started up in 1959 as a university college for coloured students, and had no autonomy because it fell under the auspices of the distance learning University of South Africa.

Getting readers to talk about it

Through its text and the accompanying snapshots and flyers, the book seamlessly encapsulates the UWC experience from inception to the present day.

“We cannot have one voice speaking for one era,” said Thomas. “We wanted voices from different eras and we succeeded in doing that.”

Thomas intended each short story and essay to discourse with one another, allowing the reader to enter the conversation and to understand the socio-political context of the texts.

“I wanted to elicit a response, to get readers to talk and debate about it.”

Thomas hopes other universities will follow suit in compiling a students’ history of their universities as it would, he said, “enrich our national narrative”.

Some of the writers include current Minister of Economic Development Ebrahim Patel; Oxford University graduate and poet Arthur Nortje; Penny Japhta, deputy chief education specialist at the Eastern Cape Education Department; and Cecyl Esau who now works for the Institute of Justice and Reconciliation.

The anthology is published as a bilingual title, with stories told either in English or Afrikaans.

Thomas chose to stick with each writer’s vernacular so as to illustrate the university’s diversity and maintain the integrity of the narrative. “They lived that experience through their language,” he said.

He also did not want the stories to lose any of their charm through translation.

Despite the bilingualism, the book’s sales have been satisfactory. The launch took place in Cape Town before release in Port Elizabeth, East London, Kimberly, Graaf Reinet and Swellendam.

Thomas also presented the title at his lecture at the recent National Arts Festival in Grahamstown.

When the apartheid government in 1960 announced that each perceived racial group was to have its own university, the UWC led the protest against this decree.

“The idea of the Extension of University Education Act of 1959 was to divide students by establishing ethnic universities,” explained Thomas.

But the idea backfired on the government as universities rejected separate ethnic institutes. Instead, the protesters used these universities as a base for activism.

However, as stated in the book, there were authorities, lecturers and students who believed separate development would work. These students became quislings for the authorities, often sabotaging planned protests and listening in on student meetings.

When the Black Consciousness Movement (BCM) started in 1969, UWC expressed no interest until the movement’s leader actually visited the campus to explain more about it.

When the Soweto students’ uprising occurred in 1976 there were rumblings in universities in the country’s eastern parts. However, a month after the uprising, when the situation had eased, UWC students took a stance against the government and used statements, pamphlets and symposia to stoke the fires of protest.

“Greater Cape Town joined [the UWC students]. Because of this energy and sacrifice the other universities stirred up again and it became a truly national movement,” said Thomas.

“There was a running joke that went, ‘The way to Parliament was through the Student Representative Council (SRC) of the UWC,’” he added.

“Every writer has an agenda”

Thomas himself was an active protester during his time at UWC. He was a member of the South African Students Organisation as well as the Literary Society of the Western Cape.

He was assigned as a scribe by the university’s SRC to capture the proceedings of a series of symposia in July and August of 1976.

He remained active until 1985 and then moved to the US in 1987 where he worked and studied for seven years.

During his time at the University of Notre Dame in South Bend, Indiana, he met philosophy scholar Professor Peter Walshe, the South African-born Oxford don.

Along with Walshe, Thomas involved himself in the divestment movement that pressurised universities to withdraw investments in South Africa.

Thomas is currently promoting a fictional adventure, The Sea People’s Coast, written by Mary Wallace, through Wendy’s Book Lounge and is working on a forthcoming biography on the late South African activist, journalist and poet Dennis Brutus.