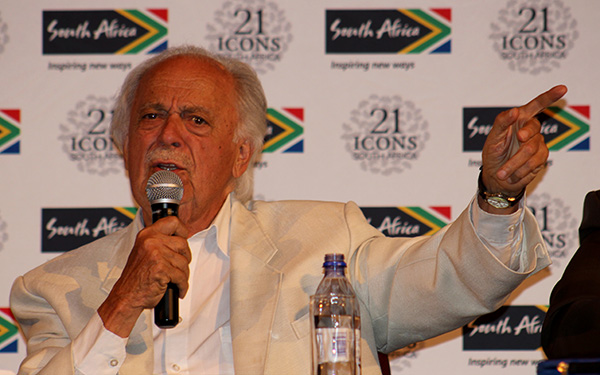 At the first Brand South Africa 21 Icons Campus Dialogue, veteran human rights lawyer George Bizos discussed his experiences as a child in Greece and then moving to South Africa, and how that affected his understanding of culture.

The inaugural Brand South Africa 21 Icons Campus Dialogue focused on the role the arts and artists played in dismantling apartheid by challenging the thinking of the time.

The dialogues form part of the 21 Icons photography project, which celebrates the lives and achievements of 21 prominent South Africans who helped mould the country’s democracy.

Pather spoke on how, during apartheid, artists ran the risk of being banned, beaten and even assassinated for challenging the system.

“The war against apartheid was being fought on all fronts,” she said. “This war was not only won by revolutionaries and politicians. It was articulated through the words of playwrights, novelists and poets, through the lyrics and melodies of musicians and through the storytelling of a plethora of artists and art forms.”

Her introduction set the tone for the rest of the dialogue, which explored the role the arts played, and still play, in shaping South Africa’s Constitution, and government’s commitment to supporting developing artists.

As the issues facing the country and its people change, the panellists agreed, so too do the arts, in an “ongoing cycle of coevolution”.

The panellists reiterated that the arts have, for a long time, been at the vanguard in the struggle against social injustices such as oppression and xenophobia by laying bare unpalatable societal truths.

“Twenty years on,” Pather said, “we need to ask the questions relating to the value of the arts, its role in shaping our identity, what it means to be South African, how far have we travelled and where are we going.”

Responding to Pather’s question on the biggest challenge the government has faced in developing the arts in the past 20 years, Xaba said: “One is coherence, and by coherence I mean that a very big part of our challenge is who do we talk to when we talk to the sector because the sector has many fragmentations, has many formations and has many ways in which it is represented and it is difficult to talk to a sector from a government perspective.

“I think a lot can be gained by having a single voice from the sector that government can speak to.”

He added that being able to reach out to grassroots artists was also a major challenge, and that he is particularly passionate about community arts at a grassroots level.

Klotz added her voice, saying that she is currently trying to activate independent arts organisations and other community arts centres to form a coalition to address the issue of coherence. Responding to a query on government’s role in funding arts education, she said that the “terrain is very difficult and it’s hard [in terms of funding]” as of the initial 40 organisations supported before the implementation of bilateral agreements over the past 20 years, only five exist today.

Klotz pointed to the individuality of artists, saying “we are not a sports team, we don’t like dressing up in the same uniforms. We like to play together sometimes, but we also like to be individual, and that’s why we’re artists.”

Sichel asked Xaba to consider that “we are in an era where professional performing arts is in survival mode in this country”.

“We urgently need to have a stock take – an artistic and ascetic audit – because we are also hostages of our past. There are so many divisions and we don’t really know where we come from in terms of art form and culture practice.”

Sichel highlighted that there are many artists in “economic artistic exile”.

“We have opera singers, dancers, choreographers, writers and actors who are not in South Africa and should be, yet they identify themselves as South Africans.”

She said economic censorship has had a negative impact on the arts because artists are being told they are not African enough or are not “grassroots” enough. She asked, “If everything is grassroots, what do you aspire to if there is no professional standard?”

Sichel added that “part of our DNA [as artists] is socio-political issue-based work and a lot of this work is touring the world at the moment because it is art and not propaganda”.

Being the son of a “Greek mayor and a product of numerous cultures” Bizos touched on his experiences in Greece as a youth, moving to South Africa, his experiences here and how that has affected his understanding of culture.

He added that “Art has a very important part to play in any transformation that is to take place.”

Xaba said that art is often viewed as a luxury, but that it “must be viewed too as an industry … currently employing hundreds of thousands of people around the country” and like other industries it should be nurtured and developed.

Pather said that art had yet to be seen as important to society by parents, who were more likely to channel their children into traditional careers. She said “artists are made and I think activists are made” adding that “in terms of the whole role of nation-building I feel so strongly that we need to be telling more complex stories”.

“We need to be telling stories about real people; in the old days we used to tell stories to mobilise and conscientise and inspire and provoke and now we don’t have to do that anymore.”