Hugh Masekela was a mighty symbol of liberation and struggle, celebrated for his thrilling live performances and great spirit. He has sadly lost his courageous battle with cancer but the power of his music will last lifetimes.

He was warm and generous in his enthusiasm and humour, and Serious was lucky enough to work with him in Britain and beyond for nearly 25 years, starting with the celebratory Tour of Hope, co-starring Hugh Masekela and Miriam Makeba, which played 44 cities and festivals across Europe.

Serious as it exists now was drawn together by Hugh and the power of his music. When she was a director of africa95, Claire Whitaker commissioned us to produce africa95’s opening concert featuring Hugh Masekela playing with Afro-Bloc – the first of many collaborations with British musicians that we were proud to produce. By the end of africa95, Claire had joined Serious, and Hugh’s epic concert in 1996 was also our first New Audiences event, drawing young people and African communities from Deptford to the Royal Festival Hall.

We brought together Hugh Masekela, Jazz Jamaica All Stars and a 150-strong East End choir to play at the Barbican in 2004 – this collaboration toured Britain and played the North Sea Jazz Festival. It marked the start of his work with Jason Yarde, who wrote All Souls Seek Joy, a trumpet concerto for Hugh played several times by Hugh and the London Symphony Orchestra. Hugh was always passionate about the work of younger musicians – perhaps it had something to do with Bishop Trevor Huddleston encouraging him as a musician by giving him his first horn – and he was a founder patron of The Serious Trust, which supports our learning work.

After all the storms in his life, Hugh had a long golden period when he played the great festivals, sometimes with his own band, sometimes more informally with pianist Larry Willis telling stories of their time together at Manhattan School of Music. He played a stunning set to 20,000 people as part of BT River of Music in the run-up to the Olympics, with a choir drawn from all the countries of Southern Africa, and re-worked Graceland with Paul Simon.

Hugh always loved jazz – his favourite album of all was Clifford Brown With Strings – and he was delighted to play a run of four shows at Ronnie Scotts in 2016, on what turned out to be his last visit to London. He never lost his spirit of adventure – meeting British trumpeter Yazz Ahmed, during that visit, at a Serious Trust event which featured artists from the Take Five talent development programme, he was so taken with her instrument and playing that the next day, she carried him off to Eclipse Trumpets in Luton, where he bought a new horn on the spot.

He hoped to play one last London concert in the 25th EFG London Jazz Festival last November in a celebration of the Jazz Epistles with Abdullah Ibrahim – sadly, that wasn’t to be, and instead Abdullah saluted on stage both Hugh and their shared history. We are still coming to terms with the death of this great man, but all of us at Serious plan to celebrate Hugh in the way he would most want – by creating new opportunities for African artists inside our festivals.

Serious are one of the UK’s leading producers and curators of live jazz, international and new music. Serious produces events that range from major concerts, festivals and national and international tours through to learning and participation programmes, conferences and specially commissioned bespoke events. Alongside its core role as a live music events producer, and programme consultant, Serious are committed to ensuring that music is accessible to all, and that artists have opportunities needed to reach their full potential. Our charity Serious Trust is crucial in enabling this ambition through supporting our talent development, learning & participation and commissioning programmes. 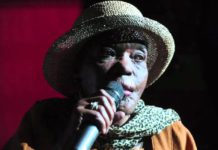