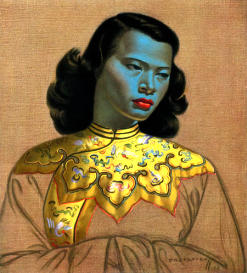 The Chinese Girl, with her blue skin and red lips, is one of the most widely reproduced artworks of the 20th century.
(Image: Bonhams) 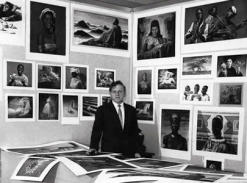 The artist in his heyday, surrounded by some of his paintings.
(Image: Tretchikoff)

The celebrated Tretchikoff painting Chinese Girl is to go on auction in London on 20 March, but before that the pop culture classic will be exhibited in Johannesburg and New York.

The artwork, of an oriental woman with a strange hue to her skin, is said to be the self-taught Tretchikoff’s most recognisable painting, and one that has been reproduced, according to some sources, more often than the Mona Lisa. It’s also known as the Green Lady or the Blue Lady – depending on the quality of the print.

Bidding will start at US$471 000 (R4.3-million), says auction house Bonhams, and the painting is expected to bring in as much as $785 000 (R7.1-million). The sale is part of a yearly auction of South African art and will include a special focus on works by William Kentridge.

At the 2012 South African sale, held in March, sculptures by Anton van Wouw and Edoardo Villa as well as paintings by Irma Stern, Cecil Skotnes, Walter Battiss and Pierneef, among others, sold for thousands and in some cases, millions of rands. Tretchikoff’s Fighting Zebras changed hands for $92 400 (R838 000).

Bonhams also reports that in October 2012, at part two of the South African sale, Tretchikoff’s Portrait of Lenka fetched a new artist’s world record price of $530 000 (R4.8-million). Lenka was Tretchikoff’s muse during World War Two, and he painted her several times.

Tretchikoff sold the original Chinese Girl to an American woman during a tour of the US, and it has remained in the family ever since. According to Bonhams, the buyer’s granddaughter is now putting the painting up for auction.

The painting will be on view at Johannesburg’s Everard Read Gallery on 23, 25 and 26 February before it’s shipped to London.

In a 2011 interview in the South African version of Marie Claire magazine, the identity of the mysterious woman, a puzzle that had art lovers scratching their heads for decades, was revealed. She is Monika Pon, now resident on Gauteng’s East Rand, but in those days she was Monika Sing-Lee and she lived in Cape Town.

In 1950, she was just 17 when she encountered the artist in her uncle’s laundromat in the suburb of Sea Point. Tretchikoff asked her to pose for him and some 15 of his pupils at his studio in the inner-city suburb of Gardens.

But the young woman didn’t appreciate the significance of the opportunity because, as she said, “he wasn’t famous”. That would only happen during the 1960s and 1970s, when prints of the Chinese Girl began to appear in living rooms, restaurants and on memorabilia all over the world.

There are actually two versions of the Chinese Girl – in the well-known one Sing-Lee wears a vibrant gold-coloured tunic and in the lesser-known version she wears a subdued blue top. She was paid the equivalent of $2.2 (R20) for effort.

Russian author Boris Gorelik has also made the pilgrimage to visit the subject of what has been described as the world’s most reproduced artwork. Gorelik’s book Incredible Tretchikoff is scheduled for publication in 2013, and he travelled from Moscow to Johannesburg to interview Sing-Lee for the book.

The Russian admits in a local newspaper article, published in mid-2011, that he was sceptical at first, but when Sing-Lee opened an album to show him photos of herself that were taken around that time, his doubts vanished.

“The girl in the black-and-white snapshots from the fifties was just like the legendary image come to life,” he wrote. “Only, she smiled most of the time and didn’t have that turquoise tint to her face. The visual similarity couldn’t be clearer.”

Gorelik maintains that Chinese Girl prints in top condition can bring in hundreds. However, the outrageous Tretchikoff was once widely reviled for the perceived tackiness of his paintings, which lacked subtlety and taste according to the critics, although he always insisted that he was a serious artist.

But over the last two decades the art world has had a change of heart and today the pieces are highly sought-after.

From Russia to South Africa

Vladimir Griegorievich Tretchikoff was born in 1913 in Petropavlovsk, an industrial city in today’s Kazakhstan, into a wealthy family of landowners. He was the youngest of six boys and two girls. In 1917 Russian workers rose up against the Tsarist regime and the family fled to avoid the revolution. They settled in Harbin in Manchuria, northern China.

The young Tretchikoff showed a natural artistic talent early on, and soon he was painting backdrops at the Russian opera house in that city. He later moved to Shanghai and worked there until 1934 as a cartoonist at the Shanghai Evening Post.

Tretchikoff married a fellow Russian ex-pat and the couple moved to Singapore, where his career continued to develop – until the city was invaded by Japanese forces in 1941. His wife and daughter were evacuated to an unknown destination, and he was captured by the Japanese and spent the rest of the war first in a prison camp in Serang, Java, and later, on parole in Jakarta after he had proved his claim that he was an artist.

After the war he was reunited with his wife and child, with the help of the Red Cross – the two had settled in South Africa and the country was to be his home from then on. He held his first solo exhibition in 1943 in the Maskew Miller art gallery, and became the darling of the local art community who liked his disdain of his critics. It wasn’t long before the US, Canada and the UK were also caught up in Tretchi-mania.

But still the art critics remained unconvinced, until the late 1990s when Tretchikoff’s paintings started to fetch impressive sums at auction. Sotheby’s in South Africa raised $10 000 for the Zulu Maiden in 1999 while Fruits of Bali fetched a whopping $410 000 (R3.7-million) in Cape Town in 2008. The trend is expected to continue with Chinese Girl.

Tretchikoff died in a frail care home in 2006, aged 92, after suffering a stroke a few years before. The Tretchikoff Trust was established in 2008 and keeps his legacy alive by encouraging South Africa’s youngsters to pursue their artistic dreams. 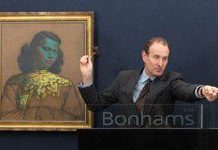