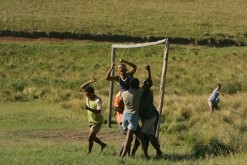 Small boys with big dreams – often it is
from these humble beginnings that future
stars emerge.

Sycholt received the prize from Unicef Germany board member Anne Luetkes at the film’s Cologne premiere on 1 August 2010.

Every year since 2004 international child rights organisation Unicef has presented the award to a film that it feels best represents the struggle to uphold children’s basic rights in the Eastern and Southern African region.

Last year’s Unicef winner was Mother Unknown, a film by Sudanese director Taghreed Alsanhouri about infants born out of wedlock in Khartoum, who become innocent victims of the stigma surrounding such situations. Alsanhouri received her award from US film star and Unicef Goodwill Ambassador Danny Glover.

Directors interested in competing for the Unicef Child Rights Award at next year’s festival can email ziff@ziff.or.tz.

The best of African cinema

The Zanzibar International Film Festival took place between 10 and 18 July 2010, mainly in Stone Town, the old part of Zanzibar City, located on Unguja Island. This is East Africa’s only functional historical town and is a Unesco World Heritage site.

Some events took place on Pemba Island, the other main island in the Zanzibar archipelago, and mainland Tanzania.

Ziff is said to be East Africa’s largest festival for film, music and the arts. Attendance at the 2009 event was around 45 000 in Stone Town alone, with over 200 000 attending screenings elsewhere in Zanzibar and on the mainland. Of these, 12 000 came from abroad. The films on show represented 43 countries.

This year’s event coincided with the 2010 Fifa World Cup, which took place in South Africa. Themba’s award is therefore especially fitting as football is one of the film’s central themes, and the film’s South African premiere took place during the tournament.

The film is garnering rave reviews from all over the world. On the Internet Movie Database it has a score of 7.6 out of 10. It is currently showing at the Labia on Orange in Cape Town.

Breaking down barriers through football

The story is based on Crossing the Line by German-Dutch author Lutz van Dijk, now resident in Cape Town. Van Dijk is a founding member of the NGO Homes for Kids on South Africa, which cares for HIV-positive children and those affected by HIV/Aids, when their families or neighbours are unable to.

He based the story on his own experience running a children’s home in the turbulent township of Masiphumelele, on the west side of the Cape Peninsula.

Sycholt, who took part of her degree studies under Nobel literature laureate John Maxwell Coetzee, said she was inspired to bring the book to the big screen as soon as she read it, as it was an inspirational coming-of-age story rather than one of despair and hopelessness. She later wrote the screen adaptation.

“Themba’s story is universal,” she said. “It’s not a football movie that builds up to one match at the end. Football is an important element though; it’s an element of hope in the boy’s life.”

The film focuses on young Themba (an Nguni word meaning “hope”), played by 21-year-old Nat Singo, who admitted that he was attracted by the “amazing script”. The sporty nature of the film, however, was something of a challenge for him.

Themba is a talented footballer and has great ambitions of one day becoming a star, but first must overcome a number of challenges; HIV, violence, poverty, and more.

Themba’s father, a miner in the northern parts of South Africa, no longer sends money for the family. His best friend Sipho recently lost his mother to Aids, becoming yet another statistic in the growing number of child-headed households. However, because of the shame associated with the condition, the family has secretly buried her in the backyard and pretends to the community that all is well.

While still young, the two boys develop an interest in the Beautiful Game and later Themba joins the Lion Strikers football team. However, on the eve of the regional championship finals he is raped by his mother’s lover, and escapes to Cape Town to seek her, taking his sister with him, but abandoning the match.

They find their mother but realise from her frail condition that she is seriously ill – later she reveals that she has Aids, and even with treatment, it would be a long time before she would be well enough to work again.

Themba is forced to look for odd jobs around the city, and finally plucks up the courage to phone Big John Jacobs, who had made contact with the boy during the regional tournament, to ask him for work.

Jacobs, the Ajax Cape Town football coach and talent scout, is played by Former German goalkeeper and World Cup player Jens Lehmann, who makes his on-screen debut as in the film.

But Jacobs has other plans for the boy, and he is invited to practise with the team. One of the players is injured before a big match, and Themba finally gets his chance to hit the pitch.

Other performers include Kagiso Mtetwa as Sipho, local songbird Simphiwe Dana as Themba’s loving mother Mandisa, and Patrick Mofokeng as her jobless lover.

Filming wrapped just as the 2009 Confederations Cup came to a close, and took place largely in Cape Town and the rural areas around Port St Johns in the Eastern Cape province. This part of the country has been hard hit by HIV/Aids, and is also one of the poorest provinces. The visuals of this stark and impoverished region are superb.

Archbishop Emeritus Desmond Tutu, a keen supporter of the film, said it reminded him of his own childhood in a small village in the former Transvaal, now Gauteng.

The young Tutu, like Themba, had hopes of rising above poverty and making something of himself in the world. “In football, Themba seems to be a lot better than I was,” Tutu said, adding that he wished the film “all possible success”.