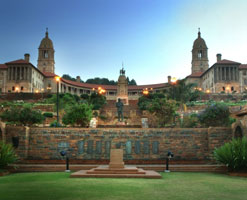 The Union Buildings have become an iconic landmark in Pretoria, South Africa. Resting impressively upon Meintjieskop they tower like a fortress over the capital.
(Image: SANews.gov.za)

The Union Buildings have become an iconic landmark in Pretoria, South Africa. Resting impressively upon Meintjieskop they tower like a fortress over the capital.

The buildings are a constant reminder of political change, but have recently enjoyed the spotlight in the wake of iconic former president Nelson Mandela’s death. On these grounds Mandela lay in state; the building is, this year, 100 years’ old; on its grounds a massive nine-metre bronze-plated statue honouring the Father of the Nation was unveiled; and President Jacob Zuma declared the edifice a South African national heritage site.

“As we celebrate 100 years of the Union Buildings, we do so satisfied and happy that this seat of government is now not only rich in terms of its aesthetic beauty only,” President Zuma said at the annual 16 December Reconciliation Day commemorations; “It is also rich in moral value and symbolism as well. Given its growing national importance, we have decided to declare the Union Buildings a national heritage site.”

The Union Buildings house The Presidency and the Department of International Relations and Cooperation.

The history of Pretoria and a heritage of change

Originally Pretoria was the capital of the independent Boer republic of the Transvaal; it then became one of the three capitals of South Africa and an international symbol of apartheid in the 1940s.

A paradigm shift in 1994 heralded the jubilant inauguration of former President Nelson Mandela, South Africa’s first democratically elected president. The Union Buildings transformed from a symbol of white, supremacist domination to one of genuine unity.

“By declaring the Union Buildings as a national heritage site, we are acknowledging its historic significance and affirm its value as one of the sites that houses our nation’s heritage.

“We are doing this as part of our ongoing work to write a new and inclusive narrative for our country, while we acknowledge the past; we also emphasise that we are now one nation and that our national symbols need to reflect that unity in diversity,” the president said in his address.

Influential architect Sir Herbert Baker designed this space in 1908. Building began in 1909 and it was completed in 1913. With construction spanning almost three years, it took some 1265 artisans and labourers to construct, using 14 million bricks for the interior office walls, half a million cubic feet of freestone, 74 000 cubic yards of concrete, 40 000 bags of cement and 20 000 cubic feet of granite.

Baker was strongly in favour of building at Meintjieskop, which was within a mile of the centre of Pretoria and reminded him strongly of the acropolises of Greece and Asia Minor, where he had studied Mediterranean architecture.

The concept of an acropolis and a building was in line with renowned British architect Sir Christopher Wren‘s theory that a public building should be a national ornament which establishes a nation, draws people and commerce and makes people love their country. The then powers that be, who, at the time were preoccupied with the ideal of establishing a new and united nation, were easily persuaded to approve the project.

“People will come from all over the world to wonder at the beauty of the site and to admire the forethought and courage of the men who selected it,” remarked the British high commissioner at the time, Lord Selborne.

A symbol of unity and freedom

The Union Buildings were commissioned as part of establishing the Union of South Africa. Prior to this, South Africa had been divided into two British colonies and two independent Boer republics, which were all unified into one country after the Anglo Boer War.

From the mid-twentieth century, the Union Buildings served as a location for political protests, particularly during apartheid, and represent a dark layer of South Africa’s history.

Baker envisaged two identical wings spread out as a symbol of the meeting of English and Afrikaans cultures, the unification of a divided people. These wings were to be linked by a semi-circular wing, and the space in-between was levelled to form an amphitheatre, in the Greek fashion, for gatherings of national and ceremonial importance. This was to symbolise the unity accomplished after the Anglo Boer War.

The middle of the dome was meant to emulate the White House dome in the United States and was designed to symbolise a temple of peace; the dome was never finished and the Union Buildings are incomplete.

The matching statues atop the domed towers depicting Greek Titan Atlas holding up the world were sculpted by Abraham Broadbent.

The statue on the domed rostrum in the amphitheatre between the wings depicts Mercury, a mythic Roman messenger and a god of trade, sculpted by George Ness.

The closest suburb to the Union Buildings is Arcadia, which means “Playground of Gods”.

The Union Buildings precinct is not only held in high esteem due to its political reference, it also holds immense social value. Newly-weds come to the gardens to take pictures for posterity and busloads of tourists visit on a daily basis. “It has become a people-centred precinct,” said the president.

“The Union Buildings as a place or site of significance enriches people’s lives, providing a deep and inspirational sense of connection to community and city landscape, to the past (history) and memories. It is a tangible expression of a proudly South African identity and experience,” said a spokesperson at the Union Buildings.

“As a place of significance it reflects the diversity of the South African society, telling us who we are, the past that has formed us as well as the South African landscape. The site is therefore irreplaceable, precious and indeed of national importance; hence it must be conserved for present and future generations.”

Surrounded by terraced gardens various monuments dot the expansive lawns, including the Delville Wood War Memorial, a tribute to South African troops who died during the First World War, and a plaque in memory of those who died during the Korean War. A statue of the country’s first president, General Louis Botha, on horseback, dominates the lawn, along with the 9 000-seat Nelson Mandela amphitheatre.

The South African Police Memorial is at the top right of the gardens.

The South African National Film, Video and Sound Archives is on the grounds of the Union Buildings, and adjacent to the Police Memorial.

The land the buildings stand on originally belonged to Pretoria’s first magistrate, Andries Francois Du Toit. He sold his land, called Arcadia, to Stephanus Jacobus Meintjies, after which Meintjieskop is named.

History made at the Union Buildings

On 9 August 1956, 20 000 women marched to the doors of the Union Buildings, chanting “Wathint’ Abafazi, wathint’ imbokodo!”, which means “strike the women, strike the rock”, to protest against the pass laws of 1950. This historical event is commemorated by the public holiday National Women’s Day.

On 10 May 1994 the inauguration of former president Nelson Mandela and his vice-presidents, after the country’s first free elections, heralded the beginning of a new era in South Africa’s history.

On 31 December 1999 the South African flagship Millennium Celebration was held here. In attendance were the then-deputy president, Jacob Zuma, and other ministers.

On 10 December 2013, the Union Buildings Amphitheatre was renamed the Nelson Mandela Amphitheatre.

On 16 December 2013, a nine-metre bronze-plated statue of Mandela was unveiled at the Union Buildings.

“The unveiling of the Nelson Mandela statue was a significant tribute for a modern African statesman in a colonial building that once upheld values of hostility, resentment and division,” said Brian McKechnie of the Gauteng Institute of Architects.

“This new Madiba monument will not merely enhance the attraction and gravitas of the Union Buildings as a national heritage site. It will also remind the nation daily about the values of unity, reconciliation, compassion and Ubuntu,” President Zuma said.

President Zuma said the statue will forever remind the nation of Madiba’s towering vision and stature; “He rises majestically at the seat of government, as a symbol of peace, reconciliation, unity and progress. It will remind us of his commitment, his leadership and his dedication to the struggle against apartheid.

“It will forever remind us of his commitment to an improved quality of life for all. It will also remind us of how far we have come as a nation in just a few years. The glaring reality is that before 1994, there would have been no statue of Madiba at the Union Buildings.”

The significance of the Voortrekker Monument and the Union Buildings in the national consciousness is such that a law in Pretoria limits the height of any building between them so that the view remains unobstructed.

Pretoria has the second largest number of embassies in the world, after Washington, DC, most of which are in or near Arcadia.