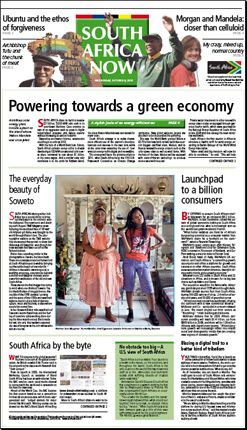 This article originally appeared on the front
page of South Africa Now, a six-page
supplement to the Washington Post
produced on behalf of Brand South Africa.
(Click to enlarge.)

South African photographer Jodi Bieber has a special ability to bring out the beauty in the ordinary, even the disfigured.

The now-iconic and shocking early August Time magazine cover, featuring the mutilated face of 18-year-old Afghani girl Aisha, was brought to the world through Bieber’s lens. The photographer explains on the Time website that she wanted the portrait to show that Aisha was still beautiful, even though her nose and ears had been cut off at the Taliban’s behest.

Bieber does something similar in the photographs in Soweto, her latest book. These are a compassionate but honest look at South Africa’s largest township, bringing out the subtle beauty of everyday life – children in the public swimming pool, a wedding entourage, a motorcycle club, a mother-and-daughter domestic scene powerfully emblematic of the old and new South Africa.

These are not the first images that spring to mind when one thinks of Soweto. Yes, it is the birthplace of struggle heroes, the crucible of the 1976 students’ uprising and the scene of late 1980s anti-apartheid violence, but it is also a hub of diversity, culture, music and business, a place where people live normal lives.

In her foreword Bieber talks of Sowetans’ friendliness, and her feeling of complete safety working there during the three-month project. But it made her sad, she says, that residents assumed she was a foreigner as the only whites who visit are tourists.

Soweto by Jodi Bieber is published by Jacana with the support of the Goethe Institut.