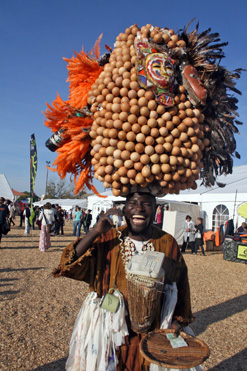 West African performance artist Gregory
da Silva, otherwise known as the Famous
Egg Man, on the streets of Grahamstown
during the National Festival of the Arts.

As the 1820 Settlers Monument perched on a hill overlooking Grahamstown comes into view, the place seems like just another quiet Eastern Cape town. But as our car draws closer, eventually winding into the broad boulevards of High Street in the town centre, the crowds of people, buskers, actors, traders, street performers and more are anything but quiet.

They’re all here for the National Festival of the Arts, a 10-day feast of performance that invades this small university town every midwinter. Now in its 35th year, globally the Grahamstown Festival is second in size only to Scotland’s Edinburgh Festival.

The theme is “10 DAYS OF AMAZ!NG”. But with over 400 stage productions on offer – and average of 40 a day – for me it might be more a case of 10 days of the Amazing Race, from venue to venue. It’s my fourth time at the festival, but even I feel a little overwhelmed.

Grahamstown in midwinter is normally a forbiddingly cold place, but this year the weather is surprisingly balmy, so we take a stroll about town to see what’s up.

There are street musicians, an artist producing portraits on the pavement, and throngs of young Grahamstown kids, their faces painted white, performing for passersby. There’s also the Famous Egg Man, Gregory da Silva, a performance artist from West Africa with a his signature headdress piled with, you guessed it, eggs.

Among the festival-goers, musicians and markets we suddenly see a group of men in orange prison overalls running down the street, with others in police uniforms in pursuit.

After the initial shock we realise that, of course, it’s some kind of performance. In fact, it’s guerilla marketing for Prison Codes, a gritty play about life in the Western Cape’s gang-dominated prisons, told from the perspective of the notorious 27s gang. The actors stage their mock-escape through the streets of Grahamstown to get people into their theatre.

George Hill, the play’s producer, tells me that festival-goers sometimes don’t realise it’s just advertising. “Some of them were scared for real,” he says. “We hope this will give them a taste of what’s to come in this hard-hitting production.”

The Prison Codes cast aren’t the only ones to use these tactics, with this year’s 234-page programme proving there’s a lot of competition. With both the main and fringe festivals boasting strong productions, casts, directors and producers use aggressive marketing campaigns to fight for audiences.

Actors wander the streets, dressed in their costumes, handing out flyers and begging everyone to see their plays.

One production that isn’t shy to make an impression is YES!, an adult-humour play that explores the quirky side of sex. The cast can be regularly seen parading the streets in nightgowns – the women in pink and the men in blue.

A woman in pink approaches me, handing me a business card with the production’s details. Then she looks me in the eye and asks, “What makes a person a better lover?”

While my cheeks heat up, another actor puts a small bottle in my hand. It turns out to be something called Afrodité, a gel with apparent libido-enhancing properties, designed specifically for women. A man nearby is given a male version of the product, and seems as unable to conceal his bewildered embarrassment as me. They certainly got our attention.

But the performers on the streets aren’t all brazen actors punting their shows. There are plenty of street musicians, such as the marimba band Sibonile. Established in 2006, the band is made up of six men and a woman, all of them from Grahamstown – and all of them blind.

Richard Nzwana, the group’s spokesperson, says they experimented with a number of instruments before they hit on the marimba – a large percussion instrument, similar to a xylophone, made of wood.

“We started playing the bongo drums and the piano, and then we heard of marimbas, and we decided to try them,” he says.

The band taught themselves to play, later securing the services of a marimba coach, who taught them by encrypting Braille on the instruments. Sibonile performed at the festival’s opening ceremony on 1 July, and will be taking part in the annual National Marimba Festival taking place on 25 to 26 July in Boksburg, east of Johannesburg.

“We are currently the defending champions,” says Nzwana. He’s confident they will walk away with the first prize again this year.

Putting together a festival of this size does not come without hefty costs, so it’s run with sponsorship from a number of institutions. The principal sponsor is Standard Bank, which was been supporting the festival for 25 years.

Other sponsors include the National Lottery, the National Arts Council, the Eastern Cape Government, with media sponsors The Sunday Independent newspaper and satellite television broadcaster MNet.

Other than the main and fringe festivals, there’s also the Spirit Festival, for those with a faith perspective on arts, which includes a gospel music workshop. Then there’s the Children’s Arts Festival, which offers theatre, performances by clowns, and as films made for children.

Amazing arts, all of it.