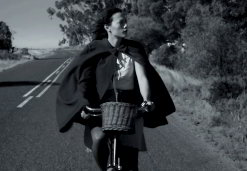 Sweetheart, played by Inge Beckmann,
sets out on the journey to find her family.

A promo shot for the forthcoming Five
Fingers for Marseilles.
(Images: Be Phat Motel)

Far from being a District 9 copy, the new black-and-white sci-fi film from Cape Town-based production company Be Phat Motel has its own dark ambience and unique character that is set to breathe new life into the genre.

The self-funded thriller, titled Sweetheart, is not a full-length feature film but still manages to entertain throughout its 26 minutes. It previewed to a receptive audience on 2 December 2010 at the Labia Theatre in Cape Town.

Sweetheart is Be Phat’s first short film and is directed by Michael Matthews and written by Sean Drummond, with a score composed by James Matthes. The film was made purely for creative purposes, claim the Be Phat team, and not to deliver any specific message or lesson.

Like District 9, Sweetheart was shot with Red One cameras. Its monochrome style, which the team says is based on the Coen Brothers’ 2001 The Man Who Wasn’t There, is a tribute to the noir films of the 1950s and 1960s. Many of the visuals were filmed in the old suburb of Woodstock, which lies about a kilometre from Cape Town’s city centre.

In mid-2010 Be Phat released a teaser on the internet, and the full trailer may now also be viewed online.

The story, which was written in under a week and filmed in eight days at the beginning of 2010, plays out in the 1950s against the backdrop of one of the tense periods of the Cold War.

“We shot the film two weeks after coming up with the idea,” said Matthews in a recent interview with Cape Town Magazine, “and without funding. I got the last part of the script on the morning we started shooting.”

“We worked with a bunch of great actors on the film,” added Drummond. “Tireless, they all gave way more of themselves than they needed to – there was a great energy.”

Sweetheart is a young wife and mother living on a farm with her family. Her husband and stepsons travel into town one day, and don’t come back. While she waits for them to return she catches glimpses of mysterious events in the distance.

Eventually Sweetheart realises that her family is not coming back, and she’s forced to leave the farm and make the trip to the city – a strange, post-apocalyptic 1950s version of Cape Town – to look for them. When she gets there she finds the place deserted, except for random groups of survivors. This makes her task all the more dangerous, but if she wants to find the answers, she must press on.

Be Phat Motel was established in 2007 and from the early days of commercials and music videos, they are now set on a new course of producing feature films.

The team originally planned Sweetheart as a five-minute experimental film, but found that it was better suited to its final length. Even without the considerable muscle of District 9 producer Peter Jackson, Be Phat has high hopes for Sweetheart and with the interest already seen online and at the preview screening, their hopes have every chance of being realised.

Their first feature film is currently in development – Five Fingers for Marseilles, which starts off in 1980s rural South Africa and aims to merge the country’s history with the classic western theme. It follows the struggle for freedom from police oppression of the small community of Railway, which sits on the fringes of a fictional South African town called Marseilles.

At first only five young men – the Five Fingers – are brave enough to stand up to the authorities, until one of them commits a crime that sends him to prison for 20 years. When he returns to his home town he finds it under threat from a new source, and must once again fight to save the day.

Five Fingers will play mainly in Sesotho and isiXhosa, with some English.