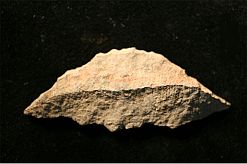 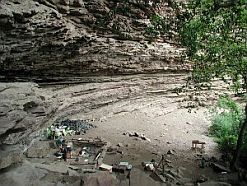 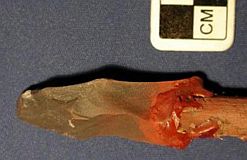 A stone tool attached to a wooden shaft
with adhesive made from red ochre no.
15 and A. karroo gum.
(Image: Wits University)

The Middle Stone Age site of Sibudu Cave, situated about 40km north of Durban, KwaZulu-Natal, has once again yielded important archaeological information. Researchers have identified a compound adhesive that was manufactured about 70 000 years ago and used to make hunting weapons.

In 2008 the cave was the site of the discovery of three bone implements that were subsequently dated to about 60 000 years ago. The discovery was significant in that it would likely establish the origin of bow and bone arrow technology as occurring at least 20 000 years earlier than originally thought.

Researchers from Wits University’s archaeology department have now revealed the discovery of a form of glue used by previous inhabitants of the cave, which was first excavated in 1983 and continues to be excavated under the current direction of Professor Lyn Wadley.

Two of Wadley’s colleagues, residue analysts Bonny Williamson and Marlize Lombard, found traces of acacia gum, and an accompanying red ochre pigment initially suspected to be merely decorative, on stone tools found inside Sibudu Cave. The ochre was only present on tools fastened to wooden shafts to make composite tools.

Acacia gum, also known as gum arabic, is a natural product exuded from acacia trees to seal holes in the bark. It is harvested from various acacia species using different methods, either by deliberately cutting holes in the trunk to stimulate gum production, or collecting from natural cracks in the bark.

The team’s findings were published in May 2009 in the Proceedings of the National Academy of Sciences. The article is titled Implications for complex cognition from the hafting of tools with compound adhesives in the Middle Stone Age, South Africa and is authored by Lyn Wadley, Tamaryn Hodgskiss and Michael Grant of Wits University.

In the paper the researchers described the ancient cave dwellers as “competent chemists, alchemists and pyrotechnologists” who knew exactly how to manipulate their ingredients and deliberately bring about the physical changes necessary to produce an effective adhesive.

While symbolic art is the internationally accepted anthropological criterion for mental capability, the team says the manufacture of the glue was as significant an achievement and shows that Stone Age people possessed much greater cognition and intelligence than originally thought.

They propose that the result of their research is a fresh way of recognising and measuring cognitive ability.

The Sibudu tools were constructed around the same time as the oldest known examples of abstract art, found in Middle Stone Age layers in Blombos Cave on the southern coast of South Africa, about 290km east of Cape Town.

The 70 000-year-old artwork is inscribed on two pieces of ochre. Blombos is also famous for the discovery of 75 000-year-old shell beads and bone tools made 80 000 years ago.

Opinions differ as to the significance of the artwork, with some experts saying that it may have been merely meaningless engravings, and others now arguing that the manufacture of a rather complex glue is a more convincing display of intelligence.

The Wits research team believes that ancient Stone Age artisans were remarkably skilled and thoroughly understood the properties of their ingredients. They used acacia gum to bond stone and wood but the method of attachment showed considerable ingenuity, as the team were unable to successfully duplicate the process using just acacia gum. They had to dig deeper for the answer.

In Stone Age times it was crucial to have effective hunting weapons, as lives were at stake. Although Wadley and her colleagues used the same methods and natural ingredients that would have been available to Stone Age dwellers, their versions of composite tools were not always as successful in stringent physical tests such as wood-chopping.

The team found that the addition of the ochre pigment produced a more robust glue that held the tools together for longer, but the manufacturing process was intricate and required careful attention.

It took some experimentation to hit on the right formulation. For instance, the fire had to be kept at the correct temperature, the control of which depended on the type of wood used. The glue could not be mixed too close to the flames or it would boil, resulting in trapped air bubbles that weakened it.

Laboratory tests established that the use of ochre causes a rise in the pH of the glue, making it less acidic. It also affects the electrostatic forces present and results in a physical change in the malleability of the substance.

A mixed particle size was important to the success of the compound adhesive. The greatest success was achieved using red ochre number 15, as this resulted in bigger grains which were comparable to stone chips in concrete. However, ancient artisans may also have added an aggregate in the form of grains of sand to ensure a more consistent product.

The team’s own experimentation showed that in contrast with other living creatures, such as some birds or wasps, that make composite glues out of instinct, the process of constructing a finished hunting weapon required the ability to multi-task in order to keep track of the various steps.

“Some of the steps required for making compound adhesive seem impossible without abstract thought and the ability to multi-task,” they wrote. “This suggests overlap between the mental abilities of modern people and people in the Middle Stone Age.”

From Africa to the World: A Celebration of African Culture on Beyonce’s #BlackIsKing