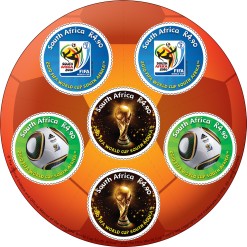 The round set of stamps depicting the
trophy, the match ball and the 2010 Fifa
World Cup logo.

The South African Post Office (Sapo) has released a series of colourful commemorative stamps and covers to mark the 2010 Fifa World Cup. The stamps were issued on 11 June, the opening day of the football extravaganza.

Football lovers and philatelists will be able to buy the two sheets and two envelopes until 31 December – or as long as stocks last.

Sapo’s senior manager of Philatelic Services Johan van Wyk said that the new releases are not related to the World Cup stamp set issued jointly by nine of the 14 member countries of the South African Development Community in April.

“As far as we know, we are the only country in the region to issue its own World Cup stamps,” he said.

The release comes after negotiations with Fifa, and subsequent approval by the world football governing body.

Both stamp sheets were designed by Philatelic Services’ inhouse graphic designer Thea Clemons, who is responsible for the blind-friendly taxi signal stamps launched in March, among other notable releases,

An initial quantity of 500 000 of each stamp sheet has been printed. The first sheet carries six self-adhesive stamps, while the second features 10.

The first set is round in shape, with a football as background. The stamps depict the 18-carat gold Fifa World Cup trophy, the official logo, and the Jabulani, the official match ball.

The second series depicts Zakumi, the green-haired official mascot of the World Cup, in five activities such as flying the flag, playing football, and cheering – for the home team Bafana Bafana, naturally.

The colourful envelopes contain an information card which gives the background to the stamp series and World Cup logo, and more. The envelopes are franked with a special football stamp bearing the date of issue.

Orders from post offices around the country are flying in, according to Van Wyk. “We are only just managing to keep up. Even on [the public holiday] 16 June the guys worked overtime to handle the demand.”

Although South Africans have anticipated the World Cup for six years, the volume of national sales has surprised even the Post Office staff, said Van Wyk.

“We’re also focusing on tourism offices and post offices in major tourist drawcards such as the V&A Waterfront in Cape Town, and Skukuza in the Kruger National Park, to ensure they always have stock available.”

The new releases are an inexpensive souvenir of the long-awaited sporting event. “We think of stamps as the smallest ambassadors of our country,” said Van Wyk.

South Africa’s profile amongst the global philatelic community is to receive a boost later in 2010 when Johannesburg hosts the Joburg 2010 International Stamp Show.

The event takes place at the Sandton Convention Centre between 27 and 31 October, under the auspices of the Federation of Inter-Asian Philately, to which South Africa is affiliated.  It is sponsored by Sapo and the Philatelic Foundation of South Africa.

The date coincides with the printing of the first stamp by the Union of South Africa in 1910. The death of King Edward VII prevented the release of the original stamp, but his successor, King George V, was portrayed on a stamp later in the year, released to commemorate the opening of the new Parliament.

With recognition from world philately governing body Fédération Internationale de Philatélie, the Joburg event is the first internationally-recognised stamp show to take place in South Africa since Ilsapex 98, held 12 years ago at Gallagher Estate in Midrand.

To date 39 countries have confirmed their attendance, said Van Wyk, and more are expected. Local and international philatelists and dealers are said to be looking forward to the event, which will cover around 5 800 square metres of space.

Besides the competitive exhibition and many contemporary designs on show, a selection from Queen Elizabeth II’s own collection will also be on view. Her Majesty has personally approved the appearance of the stamps, which will be brought to South Africa by the Keeper of the Royal Collection. Stamps from the royal collection were also exhibited at Ilsapex 98.

Sapo will issue its eighth definitive stamp series at the event.